Tonight the Jazz have a rematch against the Pesky Wolves, the two teams played last on Saturday. The Timberwolves beat the Jazz 98-72. The game was never really close. Its fair to say that the Jazz were out played, out hustled and out coached. Moni summed it up nicely with this image. 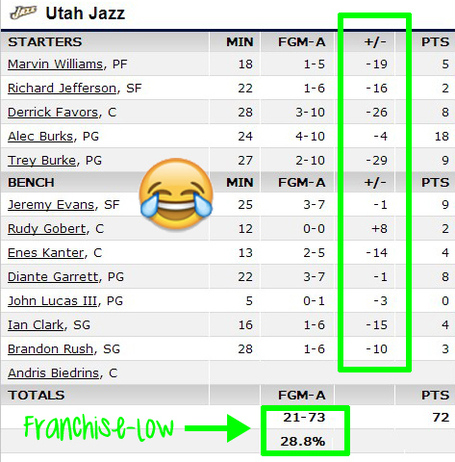 Today is a new day and a new game. Tonight, thankfully the Jazz will be playing at home. The Jazz are 8-11 at home, including winning five of their last six home games.

More good news for the Jazz is that Gordon Hayward is expected to play tonight. Hayward has missed the last five games. The Jazz went 2-3 during Haywards absence. Hayward who talked to the media for the first time yesterday since his injury said

"You've got to be able to take the good with the bad," Hayward said. "It [allowed] some rest and your whole body gets to recover a little bit, too. But as a competitor, it still sucks."

"It’s difficult," he said. "You feel like you're not doing anything, like you’re just standing around. At times, you feel like you aren’t really part of the team because you don’t go through practice."

"Jeremy said I was on vacation," Hayward laughed, "and he’s supposed to be my boy."

Alec Burks will return to the bench. When Ty was asked if Alec would continue to start he said:

On whether he’s had any thoughts about changing the lineup and starting Alec BurksNot right now.

Gordon Hayward thinks that Alec Burks will continue to get major minutes however even if Burks does not start.

"He played really well," Hayward said. "It was good to see him out there ... playing at such a high level. We need that."

Some unfortunate news for the Utah Jazz tonight however is that Derrick Favors might not play against the Wolves according to Steve Luhm.

Favors has a strained abductor and did not participate in the morning shootaround. The status of the Jazz’s starting center will be a gametime decision, according to a team spokesman.

Favors on his injury

"I'm a competitive person," Favors said. "I’m always ready to play. At the same time, I have to listen to my body and listen to the trainers. It’s a long season."

Tonights game against the Timberwolves starts a four game home stand for the Jazz. They will face the Minnesota Timberwolves, Washington Wizards, Sacramento Kings and the Golden State Warriors during their home stand.

The Timberwolves win against the Jazz last Saturday night stopped a three game losing skid for the team. Despite the Wolves recent victory, the Jazz have won 11 of the last 14 games against the Wolves. Rick Adelman recognizes that despite his team's dominance in their previous meeting, tonight's game will not be easy for the Wolves

"We know the next one, same team, at their place it's going to be tough. We have to come with the same energy."

Minnesota's frontline had its way with the Jazz on Saturday. Pekovic had 27 points and pulled down 14 rebounds, while Love finished with 18 points and 13 boards. Rubio who has struggled since his return from an ALC injury also had a nice game with six points, nine assists and eight rebounds.

C- Enes Kanter (If Derrick Favors does not play)

The Jazz look to bounce back tonight after an embarrassing loss on Saturday. Only one player (Burks/18 points) for the Jazz scored in double figures it was so bad in their last game. The Jazz have played well in their last games at home, expect a better effort tonight from the Jazz tonight against the Timberwolves.