Jazz are playing better. What is this pit in my stomach?

The Utah Jazz are no longer in last place in the West and are now currently tied for 6th worst record in the NBA.  While the wins are refreshing this still bears a resemblance to the same problem the Jazz have faced the past 3 years.  Just good enough to be bad and just bad enough not to be good.  Hypothetically if the Jazz go .500 for the rest of the year they would finish with a record of 18-19 or 19-18 giving them a final record of 34-48 or 35-47.

Spoiler Alert: That would be a better record than some Eastern Conference playoff hopefuls.

While improvement is great and the upward trend is great, count me among those that believes that it would be a fool's errand to pursue the nobility of finishing with a 35-47 record and landing the 9th or 10th pick in the NBA draft.  I believe the Jazz's front office believes the same thing and know that a course correction must be incurred from within the roster.

The trade deadline is in less than 30 days.  Expect the Jazz's name to crop up in most rumors because they have two types of contracts: players on their rookie deals and expiring veteran contracts.  I still hold firm to my prediction that a promising member of the Jazz's core is traded before the deadline or during draft day to ensure the Jazz land a promising talent in the draft.  Tankapalooza is still a goal for the Jazz's front office and they will ensure development is the number one priority of this team by the trades it makes at the deadline.

Speaking of tanking, Dante Exum has declared for the NBA Draft according to Chad Ford.  Don't know much about Dante Exum?  Here's a video by DraftExpress.com highlighting Dante Exum.

While the upward trend in play for the Jazz doesn't exactly align with the long term goal of getting a high draft pick, it does align with the development of these young Jazz players.  January has been the "a-ha" month for Gordon Hayward, Alec Burks, Enes Kanter, and Derrick Favors.  They are realizing and starting to tap into their potential.  They are scoring at a better clip 101.9 points a game rather than 95 points a game in December and 90 points a game in November.  They are trending upward.  Unfortunately, another thing that is still trending upward is opponents points per game.  While the Jazz have been scoring more, so have their opponents rising to 102 points per game from 101 points a game in December.

Jazz fans were told that this team would be judged on its defense and its defense is pretty terrible.  On the season as a whole the Jazz are 29th in defensive rating at 109.6 points per 100 possessions.  On offense they have risen to 23rd, but they have offensively minded players.  Defensive minded is a different story.  Here's a list of first year coaches whose teams have better defenses than the Jazz:

Those are just the 1st year coaches that have better defenses.  Before we go into the horrible circumstances Ty Corbin has been thrust into every single year let's mention a few of these coaches difficult challenges.

Greg Miller recently appeared on Undercover Boss (if you're reading this, Greg, can you please unblock me from twitter?).  Here is his grand disguise. 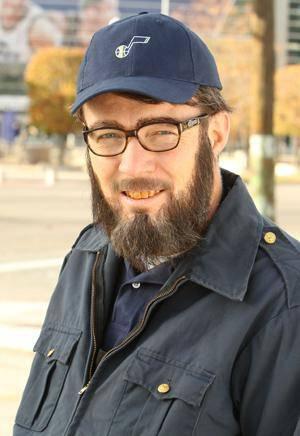 It's actually a good disguise.  I would not have recognized him.  Now if he pulled up to work for his first shift in a Shelby ... then that would have been a dead ringer.  If you want to catch the Undercover Boss episode of Greg's tune in 7 pm on February 28th.  Nice timing with it coming AFTER the trade deadline.  Nice touch.

I say this every Monday, and once again, the Jazz played .500 basketball this week. After a very difficult start, this team is actually playing quite well given its roster. The other positive is Enes Kanter is giving the Jazz some serious production. He put up 24 points against Washington this week and had 25 points and 11 rebounds against the Spurs last week.