The Downbeat #1240- The Double Ds Edition

I told Moni I didn't have any ideas for the Downbeat, after chatting we soon had enough for two downbeats, so today you get the double downbeat.

Share All sharing options for: The Downbeat #1240- The Double Ds Edition

Jazz beat the most incredible Milwaukee Bucks at the ESA last night. The Bucks now have the lead in #RigginforWiggins, #SorryforJabari, and whatever else you want to call the tanking race. Here is a quick look at the box score. RJ did not play 40 minutes, I repeat RJ did not play 40 minutes! #improveeveryday. But like Clark said in his recap, only once in ten years has the worst team won the #1 pick in the lottery, so no worries.

Steve Luhm wrote about Ty's rotations a few days ago. It was an interesting read.

Coach Tyrone Corbin has settled on a regular rotation that includes Enes Kanter, Jeremy Evans and Alec Burks off the bench, along with point guards John Lucas and Diante Garrett.

Ty said this about his rotations:

"Typically, you fall into a rotation where guys are in a rhythm with [other] guys," Corbin said. "… [But] we still want everybody engaged. We need everybody to be ready to go."

Asked how he determines which player to use, Corbin said, "Matchups and what gives us the best chance. Smaller [versus] bigger guy. How the game is going. What we need on the floor."

Also on being ready to play:

So there we have it. Seems like these players will be the ones we use.

Jazzbasketball did an incredible year in review at his blog. JBB highlights major events such as Favors extension, Millsap leaving, Jazz not making the playoffs etc, and adding the commentary that only his expertise can bring. If you haven't read it, go read it right now...... okay welcome back!

Preview of the amazing quality of insights what you'll read, JBB on the Jazz letting Jeff Hornacek go:

This blatant oversight can be smoothed over nicely if the Jazz land a potential franchise player in the heralded 2014 Draft while using the offseason to secure a quality long-term coach for the future. In the present, it continues to sting. As Hornacek has allowed young players such as Miles Plumlee, Markieff Morris, Marcus Morris, Eric Bledsoe among others to flourish, the Jazz continue to marginalize the development and experience of 3rd-year lottery picks Enes Kanter and Alec Burks while relying heavily on veteran pending free agents Richard Jefferson and Marvin Williams.

Despite emphasizing improvement on team-defense entering the season, the Jazz’s defense has actually grown substantially worse – dropping from 21st in 2012-13 to 29th in 2013-14. 210 games into his head coaching career, it appears Ty Corbin will coach the final 48 games of the season as a "lame duck" coach in the final season of his contract.

We're lucky to have fans like JBB who are so knowledgeable and are willing to share their knowledge with us!

Jeff Hornacek won Western Conference Coach of the Month for the month of December.

Hornacek's Suns went 10-3, with wins over the Mavericks, Warriors, Rockets and Clippers. They won five straight between Dec. 4-15, the longest streak the team's had since Jan. 2011. The Suns, a team thought by most to be lottery fodder, are now 19-11 and fifth in the West.

Hornacek is the early leader for Coach of the Year honors, with Terry Stotts likely his top competition. Hornacek has taken a team felt by many to be tanking, and turned it into a top-five seed in the West on Jan. 1. That's impressive.

Congrats to Trey! Trey is going to be a dad! 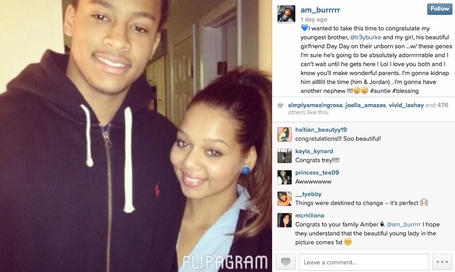 Enes Kanter had a great game last night, he really sparked the Jazz which lead to the run in the 2nd quarter which changed the complexion of the entire game.

Much has been said about Kanter this season about whether he is struggling due to lack of talent or whether he is being used properly.

In Kanter's scouting report as a draftee, it said that Kanter could shoot the outside shot, that he could be a three-point threat. We have not seen Kanter being used that way with the Jazz. It seemed perfect that Kanter would be our next Memo who would spread the offense yet play better defense (not that Memo didn't have his moments on defense,Yao Ming remembers Memo).

We have seen with Paul Millsap that in Atlanta he is shooting and making the three. Something he did not do much of in Utah. How much better would Alfense would have looked if Millsap would have been encouraged to shoot it here in Utah? Are we missing out on that again with Kanter? 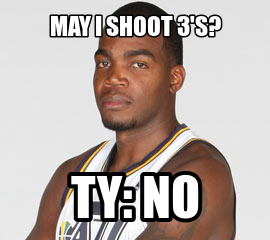 PS Would Memo be allowed to be the Money Man under Ty?

Speaking of threes, remember how they are better than long twos? Lots of teams and basketball journalists like to use numbers, stats, analytics to prove things just like that. They have conferences like the Sloan Sports Conference at MIT that are all about sports analytics. I believe the Jazz were one of two teams that did NOT send a representative to last years conference. Many have said that the Jazz don't use analytics like they should. We know Jeff (Coach of the Month) Hornacek is a coach who likes analytics and is using them to his advantage in Phoenix.

Dennis Lindsey last Friday talked to Spencer Checketts on the Zone. Analytics came up. We have been told that Dennis Lindsey into analytics. I think he is being a little bashful in his comments here. (via Moni)

On balancing eye test/gut/feel with advanced metrics/empirical data
[Because of the impossibility of scouting every international, college and NBA game], you need that data to tell you what happens. And luckily, we’ve been able to add significantly to [the scouting staff] the last few years…

My main job is to make sure that our traditional basketball people, the people with the trained eye, are communicating effectively with our analytical people, and vice versa, and take away the angst of, you know, "Hey, the numbers say you should be doing that." "Well, the numbers say duh duh duh that, I don’t have the personnel to do that." …

There are a lot of things that Kevin O’Connor and Bob Hyde and Scott Layden have, and Randy Rigby, have done well, and to say that they weren’t analytical, you know, ten years ago–there’s some work that Bob has done that I'm still digesting, that’s terrific. They just don’t need to write a book or have an article about it.

And I want to tell that story. I’m not going to get into the specific work that Bob does, because it’s very good and I don’t want to give away our trade secrets, but you know, this organization’s been analytical for a lot of different ways.

There we go. When we were first Jazzbots, Andy and I saw Jerry Sloan's desk during a Jazz locker room tour, it had all kinds of papers with different numbers and stats, FWIW.

From that same post from Moni as that Dennis Lindsey quote, Randy Rigby was asked about tanking. Rigby says the Jazz will do things the right way.

Would the team trade some veterans to up the odds of getting a transcendent player in the upcoming draft?You know what? We'll follow the rules, because I’ll tell you what. When we win an NBA championship, I don’t want to have any excuses and people knowing, you know what, we did it the right way. We did it with class.

Of course Randy would never ever say yes, we're going to do this that will help us get a better draft pick. So I read that with a grain of salt. 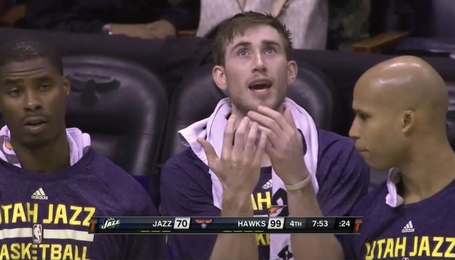 Yucca asked a fun question recently. What would be your most-wanted nickname jersey?

Which one would you want? Name your favorite nicknames or your most-wanted nickname jersey in the comment section.