The Downbeat #1244: The Gordon is Good Edition

Young Master Hayward performs in a manner which some might describe as larger than is necessary, yo. Also: FanPosts, pick-and-roll defense, and short shorts.

Share All sharing options for: The Downbeat #1244: The Gordon is Good Edition

Amar has the details, but if you didn't watch the fourth quarter, here's a brief summary: 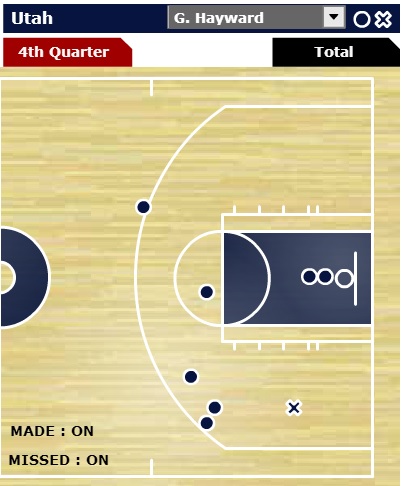 I believe the phrase you're looking for is "Too big, yo."

Funnily enough, Hayward generated a certain amount of discussion even before that performance Tuesday. During one of his BS Report podcasts, Bill Simmons posited to Zach Lowe (yep, him again) that the Boston Celtics (led by Hayward's former coach at Butler, Brad Stevens) might make a play for G-Time this offseason. @JazzBasketball1 has the transcript:

Simmons: "The Celtics made a sneaky trade over the weekend - they got rid of Courtney Lee's contract. It's now doable for the Celtics to make a run at somebody this summer, with a contract starting at I think - depending on where the cap is - it could be like $10 million, $11 million something like that. I think Gordon Hayward is a target for them and I don't know if it happens next month before the deadline or it's something where they just plan on making a giant restricted offer and hoping Utah doesn't match or whatever...but I think Gordon Hayward is somebody that they want."

Lowe: "It wouldn't surprise me, Hayward is the one restricted guy that I look at and say 'You might be able to get this guy if you really love him, you're confident that his sort of decline statistically this season is just because he's on a horrible team where he has to do too much and he's young - and you throw a huge offer at him...he's the one guy of the restricted free agents you might be able to get."

Simmons, Boston homer that he is, suggests that the Jazz should trade Hayward now in exchange for Brooklyn's first-round draft pick, which Boston owns. That's clearly ridiculous. Especially after Tuesday's game.

JazzBasketball1 speculates a bit more about the interest Hayward could draw this offseason. Make sure to click through for the full podcast transcript and his thoughts.

Before Tuesday, I'd have considered all this talk moot. I don't think Hayward has played well enough so far this season to justify a lot of worry about Hayward getting the proverbial Godfather offer the Jazz wouldn't match. And one game probably won't change that. But it did show what Hayward can do when he's on. Teams with cash to burn may be willing to pay for his potential.

What do you think? Should we be worried about Boston, Phoenix, or someone else snatching up our G-Time?

Speaking of Zach Lowe -- I'M SORRY I CAN'T HELP IT -- he released his annual Luke Walton All-Stars team, also known as the "How Is This Guy Still Relevant?" team. Guess who made the bench:

Thompson bumped Jefferson from the Walton starting lineup, but it's shocking Jefferson is stealing starts and logging 27 minutes per game on a rebuilding Utah team. He's not useless, of course. Jefferson is shooting 42 percent from deep, he allows Gordon Hayward to start games defending shooting guards instead of bulkier small forwards, and all three of Jefferson, Hayward, and Marvin Williams can switch assignments on defense in a pinch.

Jefferson is just one of those vets who sticks around - a guy who moves the ball, stays in his lane, knows all the paces on defense, and polices the locker room. Hurrah. But the minutes are a little much.

You've likely read far too much negativity in this space about a guy who frankly doesn't deserve it based on his play or his personality. But Lowe's description here is a nicely balanced one: Jefferson's useful, just probably not 27-minutes-a-game-on-a-rebuilding-team useful.

As My_Lo discussed yesterday, Jefferson's minutes do make more sense if he's being dangled as trade bait, as rumored in the Andrew Bynum talks. And even though that deal didn't happen, others might come along as the deadline nears.

Anyway. This point has been belabored enough. I'm genuinely happy that RJ has managed to make himself useful. And if it leads to the Jazz collecting more assets, so much the better.

FanPosts! Just a few quick-hitters this week. Remember, if you've got an observation or an opinion to share, consider making a FanPost instead of just a comment. I'll be sure to read it and possibly feature here on Wednesdays. (I feel like I say this every week, but seriously: this is YOUR community, and I will do everything I can to make everyone feel comfortable contributing.)

To start this week: Aged Fan compares the court time the young Jazz players are getting to other young or tanking teams:

What coach is playing his young guys more than Corbin?...it's certainly neither Jeff Hornacek nor Brad Stevens (the go-to choices when we project how things would be different with a "good" coach), and arguably it's almost no other coach in the NBA.

Ute_in_Austin, who we may safely assume is not a local, has a great signage idea for an enterprising Jazz attendee:

Someone (who can actually attend the home games) please do this! I guarantee it will have a HUGE impact on Ty's decision making for our roster rotations. I'm pretty sure he pays a lot of attention to the signs that fans hold up.

And Jordan Cummings attended last week's Bucks game and has a ton of in-person observations:

I got my hands on some free tickets for tonight's game (12th row lower bowl!) and I tried to take mental notes while I was watching. I'll start with each key player and maybe a few others. This might be a bit of rambling and probably will seem unfocused, and that's because it is. I'm kinda just writing whatever I remember and saw from the game.

Click through for all the details. Really good stuff!

Salt City Hoops' Ben Dowsett had a thought-provoking piece earlier this week on the Jazz's evolving pick-and-roll defense. You should definitely click over for all his video clips, but here's a taste:

This is the raw definition of defensive fundamentals and scouting - weighing the costs and benefits of every strategy, then employing the right one for the right situation. And while Corbin has shifted to the big man falling back against the majority of opponents, his willingness to toss in tweaks when appropriate has been an improvement on the confused schemes many had become accustomed to seeing.

In situations without a major matchup concern, Ty has instead varied things up based on his own defenders. Kanter and Favors, for instance, have recently been almost exclusively hanging back down low against the pick-and-roll - Corbin seems to have realized that they lack the foot speed to consistently get back in position without doing damage. But when Evans encounters these sets, he almost always sprints out for the high hedge, likely a sign that his coach recognizes his speed at the four and trusts him to get back in position.

These observations remind me of the long analysis Zach Lowe HOW DID HE GET IN HERE AGAIN I'M SORRY YOU GUYS wrote early last year:

And that's the thing: There are no clear, consistent rules to Utah's defense. Sometimes the big men drop back. Sometimes they stick to the screener, allowing the point guard to blow by them, a stance that indicates they expect help to come from behind them. But there are possessions on which that notion appears to make little sense.[...]

[...]Not all of this is on Corbin, obviously. The Jazz have below-average defensive personnel, and young players are notoriously slow to grasp the rules of complex NBA defense. And bad defensive teams are often better off mixing up their base defensive strategies to at least introduce some unpredictability. But the Jazz's general lack of coherence is alarming and raises questions about Corbin's future after next season, when his contract is up. Not every team can be as maniacally rule-bound as Chicago, but when teams are prone to confusing breakdowns over a long period, it's time to ask some serious questions.

Now, a good chunk of that analysis is antiquated, since it's about Al Jefferson and Paul Millsap more than Derrick Favors and Enes Kanter. But Ben has perhaps identified the method to Ty Corbin's PnR-defense madness.

Maybe that's why, in November, Corbin reacted...shall we say...negatively to Lowe's inquiries. Here's @JazzBasketball1 again with the transcript from another BS Report:

Zach Lowe: "I saw Ty Corbin today, by the way, it was an unpleasant interaction at their shootaround in Brooklyn.

Zach Lowe: "No, for once it was not your fault. Here's what happened with Ty Corbin. I asked him...I said I watched your team the other night in Houston. It seemed like you know - I asked him a question about their pick-and-roll defense basically it seemed like Derrick Favors and Kanter were coming out pretty far on pick-and-rolls, and is that their strategy every night, are they going to change it by opponent, and he looked at me and is like, 'What, you asking me to tell you our scouting report? What - like, what are you, crazy?'

And I said, 'Well, some coaches are willing to talk X's and O's with me.' And then he just said, 'Well, why don't you talk to those other coaches, then; don't talk to me.' I said, 'Okay, see you later coach!'"

I dunno. I guess that's just one possible reading of the situation. But I'd definitely like to think that Ty is competent enough to make these kinds of adjustments. And as Ben points out, they seem to be working, as the Jazz's defense has improved vastly over the last 10-15 games.

There are other explanations for this, of course -- chiefly, a healthier Jazz roster and much weaker opponents over that period. So I hesitate to make any conclusions yet. But maybe Favors and Kanter -- and yes, even Ty Corbin -- just might create an effective defense after all.

This is apparently a few months old, but I just saw it linked on Twitter today. Enjoy. 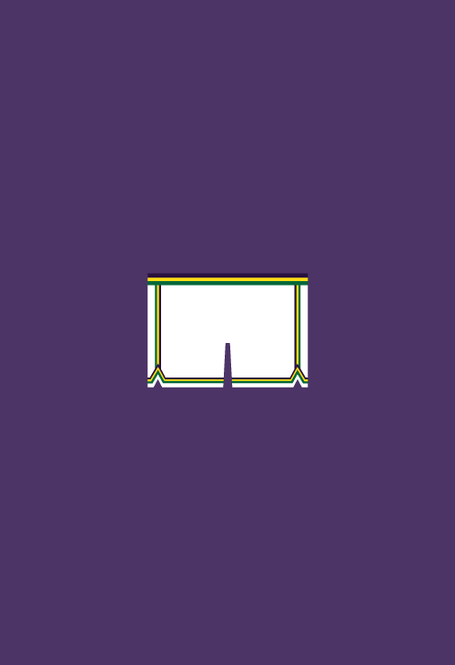