There were no survivors

Tonight the Utah Jazz hosted the Dallas Mavericks and -

"ArghghgehrhghghahahghghgghhhhaaaAAaa! I am ze Dirk! I will do the shootings!" 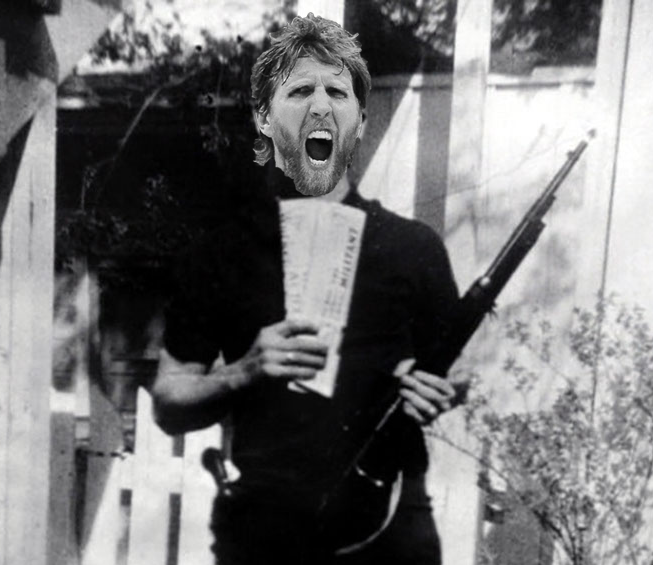 It wasn't a one man hit-job, but Dirk Nowitzki did manage to put up 27 points off of only 18 shots, and in only 28 minutes of action. (Context: Nearly a point a minute.) The Utah Jazz defense didn't have an answer for him (does anyone?), or for many of their other players: Tyson Chandler, Jameer Nelson, Monta Ellis, Brandan Wright, J.J. Barea, and Devin Harris all had 8 to 15 points in this game. But hey, this is what it looks like when you play a playoff team / championship contender every single night of the schedule so far. Our favorite guys, the Utah Jazz, will look good when they end up playing the Milwaukee Bucks and other teams of that level. Trust me.

Utah showed flashes, and I think that's what we're going to see for now. They may not be able to put in a whole game together in a flawless display of basketball prowess. But there are flashes of something really good brewing here. And I'm ready to drink that Kool-Aid. Of course, a night like tonight where the team beats itself up just as much as the opposition does is not a positive. But it's just one game.

And things are going to get better. After all, we don't play Dirk every week of the season.

For the Jazz, well, everyone didn't have the game of their dreams. It got so bad that Jeremy Evans, Steve Novak, and Ian Clark had to play. (but that could be partly injury related, more on that in the next bit) All of our players had their struggles. Derrick Favors attempted only four FGA. Enes Kanter had as many turn overs as he did FGM, and missed out on a double double by two points. Trey Burke scored 11 points off of 12 shots (but he did go 3/8 from downtown). Alec Burks had 14 points, shot nearly 50%, but finally missed a free throw. Our golden child from last game, Gordon Hayward, ended up with 12 points, and won the personal battle against Chandler Parsons (who went 1/11, and finished with 5), but you couldn't say Gordon had a good game.

If you wanted to make a point to highlight some of the players who didn't have horrible nights, Trevor Booker had a nice jam, Joe Ingles scored his first NBA bucket . . . but in extended garbage time it was Dante Exum (11 pts, 5 assists, 2 threes) and Rudy Gobert (8 points, 3 rebounds, 3 assists, 2 steals, 4 blocks) who showed up the most. It's not a lot, but there are flashes of a great team here.

The Jazz start a five game Eastern Conference road trip on Sunday. Long road trips bring teams together. It anything, it'll help this team get on the same page again. In worse news, Rodney Hood had to leave the game because of right plantar fasciitis of his foot. Boo! And seriously, where was this in his scouting report before?

On the phone with MyLo I said that a 16 point loss would be acceptable. The Jazz lost by 23. This wasn't a simple issue of wins or losses though. This team did play worse than they are capable of. And I think we all want to see the team improve from game to game. This was not indicative of game to game improvement.

But again, it's super early. This is a fun team to watch, even in losses like this.