Alec Burks has exceeded many folks expectations this year with his production off the bench. In fact, this is his first year ever with an above 15 (i.e. above average) PER. However, I don't like 1 number as a quantifier. I like multiple numbers. So, to quantify his season, behold the chart! 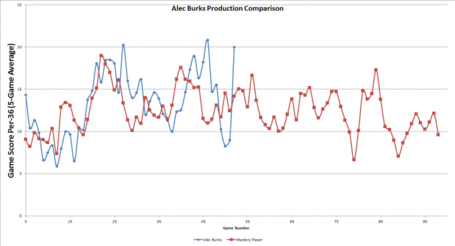 First off, what is Game Score??? Here is an excerpt from Basketball Reference:

Lastly, who is the Mystery Player shown above? Well, I'll let you guess. Your only hints are 1) He played in the playoffs, hence the larger than 82 game sample size, and 2) this is his 2012-2013 season, i.e. last season.

Edit: Here is that same picture with Lebron James 2012-2013 MVP season added as a point of reference 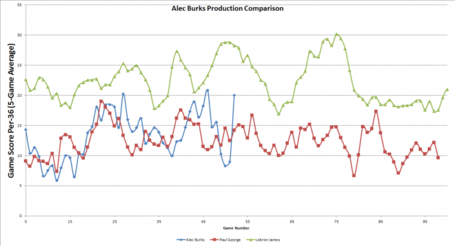 What does this graph mean?