The excitement before the game was a strange feeling for this season's Utah Jazz team. Having three former Jazzmen in the building especially ones as beloved as Paul Millsap and Kyle Korver lead to a buzz in the building. In a season where your team has won 22 games there is never that excitement. To add to specialness of the game Karl Malone was Greg Miller's courtside guest.

The Hawks had their way with the Jazz in their first half 55-49 at half-time thanks to 15 points by Kyle Korver and 11 points from Paul Millsap.  The Jazz made a super terrific run in the 3rd quarter thanks to Hayward, Burke, Jefferson, really every Jazz player that saw the court. The Jazz lead the Hawks 80-78 going into the 4th quarter. The 4th quarter saw a barrage of 3's, unfortunately for the Jazz, two of Trey Burke's threes game too little too late. Paul Millsap, Kyle Korver and DeMarre Carroll all took turns buring the Jazz in the 4th to lead the Hawks to the victory over the Jazz.

1) Karl Malone- Karl Malone was absolutely awesome in his interview.  Malone basically did it in his Malone way questioned all the silliness we have seen this year. He questioned Marvin Williams starting. He said Favors and Kanter should play more together because that is when the Jazz are at their best. Malone also said Trey should be allowed to be the point guard.

That's right @TheDeliverer_32 the plays should run thru your point guard. No wonder he's one of my favorite former players ;)

2) Seven players in double figures!  Trey lead the way with 23 points.  Williams, Jefferson, Gordon, Favors, Burks and Kanter all had at least 11.

3) It was a close game but we lost. The former Jazzmen all had nice games.  Great happy night.

1) Kanter and Burks minutes- They were having nice games yet Marvin and Jefferson played more minutes than them.  Yes Marvin and Jefferson did fine too but lets remember who will be here next year and who needs the development. Hawks announcers even said in the 4th when the Hawks were on their run. The Jazz have a really hard time scoring inside with Kanter out of the game.  Williams also did that awesome vet foul on Korver to allow the Hawks to get the free throws and the ball.

Gobert did not see the floor at all :(

2) We only had 19 assists compared to the Hawks 30 assists. We really need to share the ball more.

3)  Ty ran out of timeouts in a close game.  Sometimes he could be better at game management.

To close on a Mailmany kind of night: 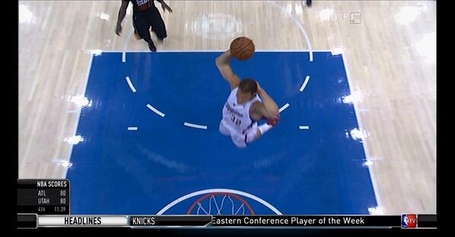