Tyrone Corbin has played basketball all around North America, and been a part of many franchises over his career. He's been around, but he's been nowhere more than Utah. While we may not regard him as a big part of our history, a big part of his is here.

Share All sharing options for: Jazz head coach Tyrone Corbin has had longest periods of stability in Utah

The concept of Tyrone Corbin didn't pop up into my consciousness until the late 1980s. Corbin was a part-time starter for the Phoenix Suns, and already years into his playing career. In truth, he was already playing for his third team at the NBA level. I liked Corbin back then, and felt like he was a good complimentary guy who could get you rebounds, and occasionally could make some mid-range jumpers. He quickly went off my radar when he was selected by the Minnesota Timberwolves in the expansion draft, and re-emerged a few seasons later with the Utah Jazz - as we traded him for Thurl Bailey. The Jazz would trade him away a few seasons later for Adam Keefe (former lotto pick). By this time Ty was much older and hadn't evolved his game enough to stay with one team for too long. He would bounce around quite a bit, and I see now that his time with the Jazz represented one of the longest periods of continued stability in his playing career.

He then moved right from being a forgotten man on the end of the Toronto Raptors bench to being a player mentor for an NBA-DL team (that would itself move around a bit). Two seasons later he got a call up from Scott Layden and he got him a job with the Knicks. And then he caught on with Utah again - this time not as a player, but a coach. Corbin has now been in Utah for a decade.

As a player, Utah was just another spot in the road for Ty. But since he hung it up, Utah has been more and more his home than anywhere else. We may be another stop in his journey, and some of us may just see Ty as another completely replaceable forward who couldn't hit the three, but maybe for him Utah is a very special place?
Here's where he's been since high school till today.

The map looks even crazier. But the maps just show where he's been, not how long he's been there. If you add up all his stops and rank them . . . you get this: 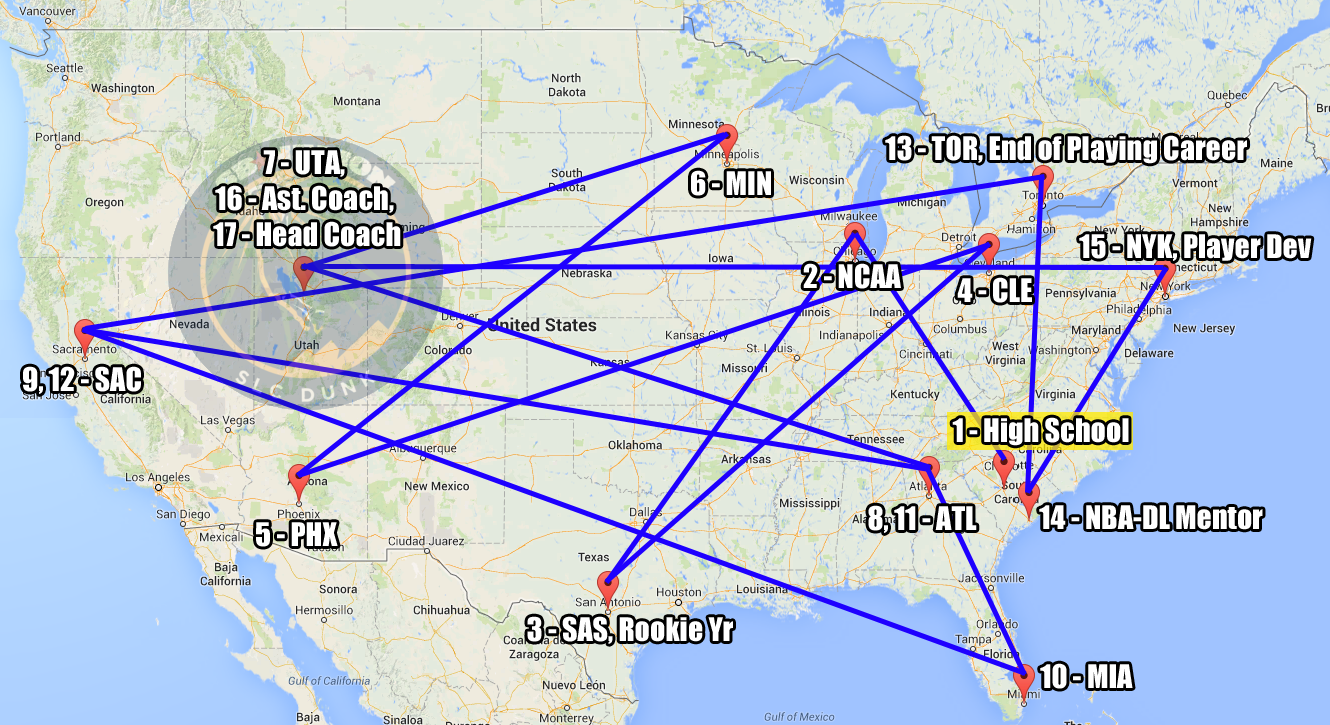 Personally, I used to be a Coach Ty supporter for longer than some of the other people who write for this site, and used to get into differences of opinion about him. I now have an evolved position on him, where I believe that he's put in a situation that is not completely in his control, and nor could he actually survive the crises he's been tasked to manage. Part of that is based on his poor coaching at time. It's not just the situation, a lot of it is performance. (His hypocritical stance on earning playing time, or how he manages Xs and Os frustrate me.)

I don't know if the Jazz are going to bring Ty back, but he's been a part of this franchise for a very long time. In Jazz time, maybe it's not long enough. For fans, maybe it's been too long. But for Corbin, when you put it into perspective of his entire career with the game from high school till now, the majority of it has been here. And the periods with the most stability, obviously, have also been in Salt Lake City.

Ty's a good guy. He went to Africa last off-season and did good work there. He has tried his best here. But not unlike his playing career, the lack of evolution into what the team needs may be what makes him have to look outside of the organization for future work. He was a hustle guy, got good rebounds, stole the ball, and could occasionally make a jumper. As a product of the position from when he started he fit. But the game changed, and the Jazz needed threes to hit threes. He couldn't.

Today coaching has also changed. We need to understand advanced strategies, and incorporate the newest data. Corbin doesn't appear to do that. We may not view him as a Jazz guy, but for his life in basketball, no matter what happens this off-season, he may regard Utah as home. Effectively, you could take Corbin out of Utah; but in terms of what he's done and where he's been, you may never be able to take Utah out of Corbin.