The Downbeat #1300: The Corbinite Edition

Share All sharing options for: The Downbeat #1300: The Corbinite Edition

Tonight the Jazz take on the Los Angeles Clippers, its the 66th game of the season. 17 games left. 816 game minutes to play. The Clippers are currently on a league-leading nine game winning streak. This very much seems like a trap game for the Clippers. The offense of the Clippers is as good as the Jazz's defense is bad. The Clippers are averaging 115 ppg during their winning streak, the Jazz are allowing 106.3 ppg their last six games.

The 13th to last game of the season, the Jazz are having a great celebration. The Jazz will honor the 30th anniversary of the first Jazz team to make the playoffs.

A little bit about that team thanks to the press release:

The 1983-84 team, known as "The Team with Heart," compiled a 45-37 record, winning the Midwest Division and a first round playoff series over the Denver Nuggets. The Jazz became the first NBA team to have four separate players win league statistical crowns that season (Adrian Dantley, scoring; Mark Eaton, blocks; Darrell Griffith, three-point percentage; Rickey Green, steals), while head coach Frank Layden earned both Coach of the Year honors as well as Executive of the Year. 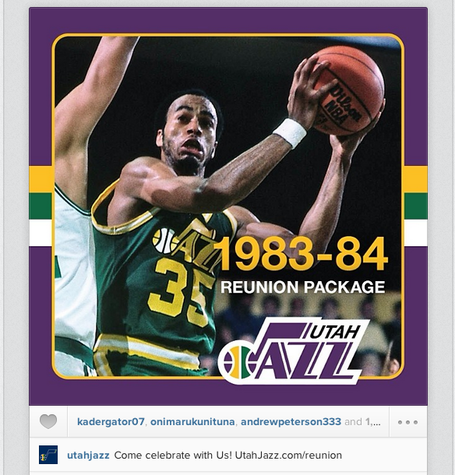 That is pretty dang impressive. If you are able to go to the game, I highly encourage you to attend. I often feel that those great teams don't get their fair share of attention because of the Stockton, Malone and Sloan teams that followed them.

Marvin Williams is injured with a strained lower back. Jonathan Rinehart reported yesterday on March 13th that Williams will have a MRI at 11:00 am today on his back. Williams has already missed 11 games this season with injury.

Aaron Falk recapped Williams' past issues with back injuries.

• In June 2011, Williams had "minor surgery on his lower back to alleviate the pain from a bulging disk" and spent about two months that summer in recovery.

Bright side: if Williams is out we'll see more Derrick Favors and Enes Kanter playing together and Rudy Gobert will get playing time!

Randy Rigby has said interesting things to say in his weekly interview with 1280. (all quotes via moni). Randy talks about staying focused to the end, the development we have seen in the players this season and former Jazz players Kyle Korver and Paul Millsap.

I’m very impressed how Ty Corbin has been running our team…Ty is on our players constantly, and he has a rapport with the players, and has the respect.

Rigby had really nice things to say about Kyle Korver and Paul Millsap. I loved it because the trend the previous years was to speak badly about former Jazz players (Deron Wiliams, Carlos Boozer and especially Andrei Kirilenko read here for more info its really unbelievable what they said) Anyways so I think its wonderful they are choosing the high road now with ex-Jazz players.

I was talking with Kyle Korver about it. He’s actually bought a home down in Santa Barbara because of his love, because of us introducing him to that. His game has improved dramatically because we identified some things that he needed to work on, and that they could help him with, and, to improve his game.

His lateral movement, his move so he can move laterally, and get up immediately. And unfortunately, we saw the results of that on Monday night. He is moving and shooting the ball better than when he was even here, and again, I think it’s reflective of his commitment, but also shows you kinda the commitment we’re using and some of the things that we’re doing.

One thing that was a little confusing however was their decision regarding Paul Millsap. I LOVED that he praised Paul. Here's the praise and then the interesting part.

Paul Millsap is in, was in great shape, and I was happy to see Paul. I was happy for Paul being able to make the All-Star team. But I’m also happy to say that we made the right decisions,* is, in our moving, to go young, in order for us to really, we identified what we would be, and unfortunately, with all the analysis, we would’ve been a team that stayed somewhere in that middle. And the Millers, and all of us, said we don’t want to just be a team that stays in the middle. …

* As noted by @MarkPeacock11, the Jazz offered Millsap a 3-year extension that he turned down. So the Jazz only decided to "let him walk" after the fact.

I don't see how the Jazz don't make that offer to Paul Millsap, of course you make the offer. So maybe they wanted Millsap as part of their future or maybe they wanted to sign him for different reasons, I don't know.

I think Millsap could definitely have fitted in with Kanter and Favors. Sloan made it work with Carlos Boozer, Mehmet Okur (#13), Andrei Kirilenko and Paul Millsap :)

During the Williams-Boozer era the Jazz had a very successful big man rotation. I honestly think we could have done it again, oh well.

I am very happy however that they made the decision to go young and not be stuck in the middle anymore. I am especially glad that they acknowledge that they were in the middle.

Karl Malone made nba.com thanks to his flip-phone. Lang Whittacker wrote a nice article about it. In the article Whittacker shares a fun story about Karl that happened a few years ago:

One weekday morning at 7:00 A.M., my cell phone rang, waking me from a deep sleep. I rolled over and checked the screen, and didn’t recognize the number, but I answered anyway. It was Karl Malone. While I appreciated him returning my call, even if it was at 7:00 A.M., I asked if I could call him back in five minutes, after I had a chance to grab my recorder and my notes (and my clothes). The Mailman said sure, but cautioned me to be quick about it because he was about to go out hunting. I rolled out of bed, got my stuff together and went into my office. I sat down and called the number he’d called me on, and after one ring a fax machine answered. As the machine screamed and whirred into my ear, in the background I heard NBA legend Karl Malone yelling over it: "Lang…hold on…I just…hang on a minute…" Eventually he got the fax stopped and we had a great conversation. (And we were later able to joke about his early-morning calls.)

Lang Whittacker also had a nice interview with John Stockton a few months ago during Stockton's media blitz for his book. I thought i had read everything during the blitz but somehow I missed this one. It is really really good so go read it. Stockton talks about Sloan, Malone, analytics, books he likes to read, the process of writing his autobiography, Jeff Hornacek, competitiveness, family life, former teammates, even Seinfeld gets brought up. Its a good good interview.

ME: You wrote in the book about Jeff Hornacek having such a great knowledge of the game when you played with him. How much does having a great knowledge for a sport play a part in success versus just outstanding athleticism? Basically, how much does knowing where to position yourself matter versus having just great natural ability?

STOCKTON: Well, you see it every day. I think it’s the most overlooked thing in sports, in all sports. You watch baseball, a centerfielder may not run a 4.2 forty, but he gets to every single ball. What is he seeing that the rest of us aren’t? Jeff Hornacek was a plenty good enough athlete — he didn’t have a deficiency in that area that he overcame with intelligence — but boy was he bright. And he knew things in advance, he had numbers in his head and he could combine them all. So, special guy. I think right now it’s easier to go find that cookie-cutter athlete and say, "That’s my next starting center fielder." Where I think they miss — and I’m picking on baseball but this is all sports — is they’re missing that guy that gets it, who has great anticipation, has a feel for where the pitch is and where it’s going to strike the bat and is already there. That’s a baseball player to me.

ME: Karl Malone says in the forward of your book how when you played you never really opened up much with the media, even though you did have thoughts and opinions. But because you never talked about those things, people thought you didn’t really have opinions on those things. Why did you feel like now was the time to open up?

STOCKTON: Well, I have a lot of opinions that didn’t make the book. That’s a fine line. When you’re talking and you and I are in a room and this (points to digital recorder) isn’t on, we could have a lot more open discussion about sensitive topics because we could get through any hiccups. Once you’re writing and it’s on paper and you’re defending it to nobody, that’s a tough proposition. I don’t feel like I’m really venting a lot of opinions. I would like to have, in a way. But it’s a tough venue. Karl and I could talk about anything, but most of that stuff I’m not putting in print.

I found that last quote interesting. Stockton's book was written so well. I felt like he was telling us his life story, which was pretty remarkable. Stockton however never spoke ill of people in his book even when he shared times that he wasn't happy. He walked that fine like he said and did it well.

One of the times that he shares is of course his last season with the Jazz and how the culture of the team had changed. Not once did he mention any of the players that were causing the disruptions or the changes, while other professional athletes and coaches write books just to tell it as it is and bad mouth former teammates etc.

Stockton, I imagine could have mentioned Mark Jackson (#13) but he didn't. I imagine there were many things that he could have shared about the many different conflicts that inevitably happened over the 19 years that the was with the Jazz but instead he chose not to do so. Stockton wrote his book with a class and maturity you don't often see in pro-sports.

We wouldn't have Downbeat #1300 if it wasn't for Kris (Basketball John). While I didn't know of this site when it first started, I have since gone back and read every single Downbeat that was ever written. The work Kris did to establish this site was incredible, his writing and creativity set him apart from other Jazz blogs.The community that Kris created is the greatest part about SLC Dunk, so thank you Kris.

While Kris doesn't write as many posts here anymore, we are lucky to have him around with the occasional posts, comments and of course Twitter. 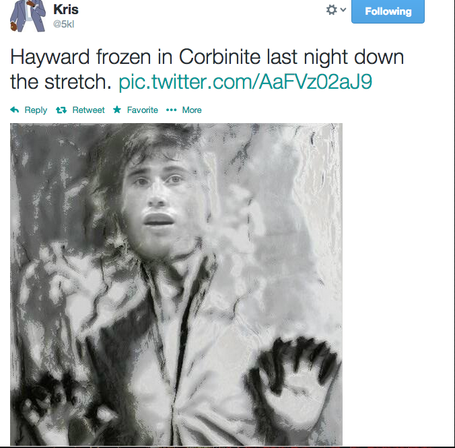