The last incarnation of the Jazz seemed to have a problem with the Los Angeles Lakers. These guys? It's the San Antonio Spurs. Tyrone Corbin started Enes Kanter (who played 7 minutes in the first half) and the team got pounced on early by the several-times-champions Spurs. The game normalized a bit and Derrick Favors and Marvin Williams started cooking. Gordon Hayward was doing a bit of everything on his way to another triple-couple. And, the largest surprise, was that Utah was hanging in with San Antonio.

Perhaps the majority of that was San Antonio checking us out and probing us, and less of it was Utah doing amazing things. It was a sloppy game in the first half with a number of defensive mistakes and, well, . . .

But as we're certain that the sun will come up the next day we are certain that the Spurs would turn it on in the third quarter, and they blew open what was once a close game to, well, become a normal Spurs/Jazz game. Save for a few runs the margin was above 10 points the rest of the way. 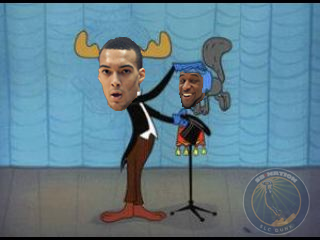 The Jazz continue their three games in four nights road trip with a game @ Houston Rockets tomorrow, and then @ Memphis Grizzlies.