The St. Paddy's Day uniform variations are a great part of the waning NBA season. As we hit the last 20 games we start to see a lull in the action as playoff positions start to shake out. The only exciting races are concentrated in clusters fighting for seeding, with half the teams already eliminated from the playoffs.

The last two games the Jazz have suited up in their green alternate's and they guys have put them with green shoes. Whether you're a sneaker-head, or not, it's cool to see the guys show some of their style.

Here's a couple of them, via David Locke's Instagram:

These last 4 games have been a good example of what this season should be about [The Sixers game doesn't count]. The Jazz have played 4 top tier Western Conference teams and held their own for a good portion of those games. No, not moral victories, but competitive losses at least give the glimmer of hope for the future.

Their defensive rating (DefRtg) still looks horrible, as the team has allowed 118 Pts/100 poss., but that was largely inflated due to last night's second half blowout. A road game against one of (if not the) hottest teams in the NBA is recipe for a just such an outcome for this team, but the first half was very encouraging.

Their youth has shown through against these top teams, as they've coughed the ball up 14.2 times/100poss., but this isn't necessarily a bad thing, as Kevin Pelton cites in his SCHOENE rating system (as told to Deadspin:)

Which bad traits in a young player are good indicators for future improvement, a la strikeout rate with Nate Silver's PECOTA? (Is it still mainly turnovers?)

In general, it's the ability to create offense. That manifests itself in usage rate, unassisted shots (not part of SCHOENE) and yes, turnovers. The latter is the most counterintuitive because obviously they are negative in the short term. In the long term, there is some evidence that high-turnover players develop more, presumably because they're trying to make plays and eventually those mistakes will become successes.

Keep this in mind to preserve your sanity as Matt Harpring rails against the young players for their mistakes.

[Note: In that span the Jazz averaged 15.2 turnovers for the first 3 games. The numbers seems less shaky because somehow they only had 8 in SA last night]

Another brights spot over that span? Trey has looked MUCH improved. Over the course of those four games, Trey's eFG% is 65%, and his TS% is 66%. He still isn't getting to the line, but those advanced stats are up because he's hitting his three's- 50% in that span. He is also averaging 35 mins over that span, which is pretty close to the 36 per that would be closer to ideal for him.

Recently Gordon Monson wrote a piece for the SL Trib titled 10 things the Jazz can do to improve their future (That title is straight out of Bleacher Report). In it, he makes some very valid points. Valid points that have been brought up elsewhere all year, but valid nonetheless. I tend to agree with most of them, with the exception of this one:

3. Scream at Kanter until he plays better, smarter defense.

The big Turk will never be a shot-blocker, but he can use his strength to his advantage in protecting the basket with a double-dose of anticipation and recognition. He picks up useless fouls, often because of a lack of savvy.

We've been down this road before. It has been brought up on this site, that Kanter is being mishandled, and this is just an example of escalation of commitment. The idea that every athlete responds better to louder screaming is an absolute farce. How many of you would get better if your boss was constantly screaming at you? Why should an athlete be any different? To lump every player into the same category and use the same motivational techniques is just bad leadership. Most experts in motivation, whether it be in business management or teaching (Yucca will back me up on this) will tell you that it is, in fact the worst method. To say that these players are "big boys" and need to "suck it up" is macho BS that needs to go back to 1952, and stay there.

Now, I'm sure that Monson is being facetious and simply means that Kanter needs to play better defense, but the reality is the entire team is deficient in this area. A good team defense acts as a single cohesive unit and to single out one player in that unit goes against that philosophy.

One way to look at the motivation of these young players is what's called "Expectancy Theory". It is a management model used to identify the abilities, effort, and performance needed to reach a certain outcome. 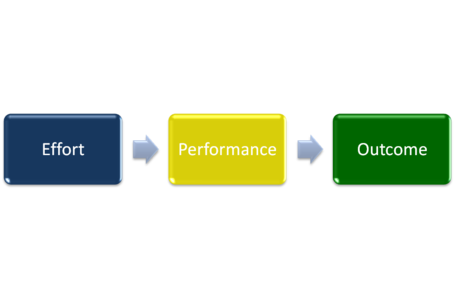 There are things that can be done in order for a player to feel like the effort he puts in will lead to a particular level of performance and for the organization to increase the odds of achievement. This includes having the required training, having clear knowledge of the requirements of the task, having the time and resources to accomplish the task, and coaching those that lack self-confidence.

How many of these requirements are being met, by players and the organization? Certainly they are not spelled out in such exact terms, though it would be immensely helpful, but oh to be a fly in the wall during practice, film sessions, etc., to see how much of this is used.