Let's look on the bright side and John Lucas with yakity sax.

Share All sharing options for: The Downbeat #1303: Silver Linings Edition

The Jazz got blown out yesterday. Bad. Lucas got into a fight. Bad. Honestly, most of us wish there was a simulate to the end of the season button so we could know our fate and live with it. The endless hoping that they improve coupled with praying that they lose for a good draft pick is becoming terrible. It's like hoping your alcoholic brother gets off the liquor by himself but at the same time hoping he tailspins so bad that you can check him into rehab that will ultimately help him even more in the longterm.

So time for some silver linings on the season.

The Utah Jazz have two players in the top 30 rebounders in the NBA.

Yes, you read that correctly. Enes Kanter and Derrick Favors if they played 36 minutes (which has been discussed many times on this site) would average 9.5 and 10.6 rebounds per game. In fact, when compared to the best big man combo in the NBA, Marc Gasol and Zach Randolph they compare very favorably.

Grit And Grind Frontcourt PER 36

Kanter And Favors PER 36

Kanter and Favors would actually be Utah's most effective scoring options on offense and if they played 36 minutes a game would help Utah's 17th ranked rebounding percentage. Yes, they struggle on defense. But I thought this season was about development and not wins and losses. On offense the Jazz have a front court that could rival the Memphis Grizzlies. They rarely play together and, honestly, don't know how to play well together. But you can only learn through doing so plays these young guys together. Utah's average FG% as a team is 44%. Kanter and Favors shoot above average from the field. FEED THE POST. They're special.

Jazz fans are pining for Parker in the worst way. Not only are they hungry for a scorer who can contribute right away, but the hope is that his Mormon faith would keep him rooted in Utah for his career.

I'm told if the Jazz do slide in the draft, they are also high on Gordon, who they believe could be an Andrei Kirilenko-type presence.

A reminder on Parker's skills.

A refresher on Aaron Gordon.

Spoiler Alert: He may not be Jabari, but the Utah Jazz would be on Sportscenter a lot more with his highlights.

I thought I'd highlight one prospect a week that the Utah Jazz could select with that Golden State pick. Today we will be highlighting T.J. Warren. He plays for North Carolina ... State. His stats:

T.J. is just a flat out scorer. He's shooting 58% from the field and 27.7% from three. He shot the ball much better from three last year but he has more attention on him probably attributing to that drop off. He gets tot he line 6.2 times a game and shoots 71% from the line. He's made remarkable improvements in every category and gets 1.7 steals a game. A very good indication of hustle.

Have you changed your avatar yet? 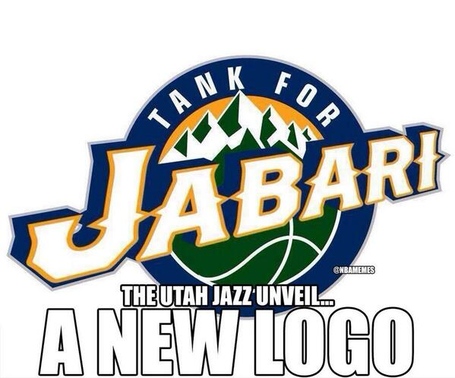 Seriously, what a clown move. Sorry, he embarrassed the entire Utah Jazz squad. Gets the entire stadium to boo at the team during a 40 point loss. Yeah, people can say he showed some heart but this doesn't show heart. It was just a feeble attempt to build up a useless steal stat and attempt to get an assist at the end of the game. Know your role. Be classy. Let the game end. The Rockets showed mercy by not trying to score again. Accept the gesture and move on. Great job, Lucas. This ranks up there with JR Smith untying another player's shoes this season. Absolutely pointless. You can call it gamesmanship but I call it a joke.

But the clip is way more fun if you play it at the same time as this: