Utah Jazz center Rudy Gobert is too good to use?

After a long hiatus, we've found another possible Tank Oddity -- is Rudy Gobert actually too good to use?

Share All sharing options for: Utah Jazz center Rudy Gobert is too good to use?

Rudy Gobert is big. He's really big. He's perhaps even prohibitively big. Or at least that's what it appears like if you look at him, his numbers, our play on the court without him, and try to put it all together. The Utah Jazz traded up and back into the first round of the 2013 NBA Draft to snag this guy from the Denver Nuggets. It's no surprise that the franchises that brought us Mark Eaton and Dikembe Mutombo would have a hand in bringing this section of the French Alps to America.

A year ago Gobert was just data to me. He was a name on a list of international prospects that I had never seen play before. He was a member of the French National team and played for them in one Under-18 tournament, and two Under-20 tournaments. The YouTube clips show some good things and some bad things. His performance for Cholet Basket, in France, against "men" show some startling things. I don't care what level of basketball you are playing, but against guys in their 30's our guy Gobert was shooting 72.1 fg% as a rookie, and 72.5 fg% in his second year. He was absurdly dominant at scoring near the rim, getting offensive rebounds, and blocking shots. More than that, he was just really hard to score over, around, or through. You may draw the foul on him, but you sure as heck weren't going to get an And-1.

He was invited to the NBA Draft Combine in Chicago, and Mychal and I were there to document it all. After day one we had different points of view on him. He didn't have the hustle or muscle of some of the American guys who where there, like Mike Muscala; nor did he have the shooting touch of Kelly Olynyk; and still, he was bereft of the athleticism of Steven Adams. But he had something none of those guys had. He had lugubrious length, and knew how to use it.

In two on one drills he knew this and used it to his best advantage by attacking the rim every single time. He didn't try to do anything pretty like a step back jumper, or a rolling hook shot away from contact. There was something primordial about his game. He knew he was the biggest guy there, and he either scored or was fouled on each of his attempts. (Mike Sanders was running this drill, btw.) Of course, in this drill the offensive player who is set up to be the finisher is at the advantage here. When the tables were turned and it was Gobert defending a 2 on 1 we all expected to see him depredated against.

He was, on the first attempt.

On the second one he almost blocked a shot at the rim with his elbow -- while the rest of his body was on the other side of the basket ("In Jail" was the term we used back in high school).

Here was a bigman, ostensibly the biggest of bigmen, who played big. He knew what he could do, and what he could not. He was laughably poor in the bigmen full court drills. He couldn't drain midrange jumpers with a hand in his face. But it was clear to not just first time combine reporters like myself that he was someone worth watching. At one point Kevin O'Connor nudged Jerry Sloan and pointed at Gobert during a defensive rotation drill and Jerry nodded twice. For these two men of few words this was an amazing sequence to watch from 6 feet behind them.

So on draft night he was on the board and went past where they thought he should have gone. When this happens the default idea for the Jazz is to make a move, and they did. The Jazz parted with cash and the 2013 2nd rounder pick #46 (who would turn into Erick Green) to get him. Dennis Lindsey, the Jazz GM, made it happen. They wanted him. And they got him.

During the Orlando Summer League Jeremy Evans was the bigman who looked the most ready to contribute, but he was going into his fourth season after four years of college ball. However, it was Rudy who showed the most promise. Gobert averaged 5.4 ppg, 6.2 rpg, 2.4 bpg, 1.0 apg (with a 5 to 1 assist to turn over ratio), while shooting 52.6 fg% and 70.0 ft%. And he did that in 21.3 mpg. If you bump that up to 36 minutes of action it's 9.1 ppg, 10.5 rpg, and 4.1 bpg. Oh, and he was doing it on an injured foot. After summer league, and after some R&R in the Islands, Gobert returned to France for ingrown toe nail surgery. Imagine how much more of a beast he would have been if he wasn't playing hurt and having two-a-day practices with a bum foot? In preseason Gobert would only play 14.9 mpg, and against actual NBA talent his numbers took a predictable drop. *Record scratch* Oh wait, no they didn't. He averaged 4.4 ppg while shooting 57.9 fg%, grabbed 6.0 rpg, and sent back 2.0 bpg.

So this guy was efficiently, and quietly, killing it this season at each level he was put in.

The Jazz started the season without Trey Burke, Marvin Williams, Brandon Rush, Jeremy Evans, and Andris Biedrins. There were enough injuries to mean he would get a chance to play early in his career behind Derrick Favors and Enes Kanter. In the first game of his NBA career he played nearly half the game and ended up with 2 points, 7 rebounds, and plenty of shot contests. The Jazz scared the poop out of the Oklahoma City Thunder when he was in the game. The very next game he played less than 8 minutes.

The next game Rudy played over 10 minutes had him finishing the game with 11 rebounds and 2 blocks -- 5 of his rebounds on the offensive end. The next time he played he played less than 6 minutes.

Okay, well, then the NEXT time Rudy played over 10 minutes had him finishing with 4 points, 12 rebounds, and 1 block. Thankfully he got to play in the next game, and play 'regular' minutes. He only finished with 2 points, 7 rebounds, and 2 blocks there. His playing time quickly fell off the face of the earth.

But as the season has gone on, in the times he plays, he does what he's supposed to do. And for the most part he does it well. He's just not getting the playing time. His Per 36 minutes values this season are 7.6 ppg, 12.7 rpg, and 2.9 bpg. He has a DRB% of 27.6, and ORB% of 12.6, and despite being a gangly rookie with no playing time, has accumulated as many Defensive win shares as starter Richard Jefferson.

It's kind of funny that what the Jazz really need help on is the defensive glass (if you look at our own DRB% of only 73.6%), the Jazz have been bottom 10 or bottom 5 in this for the majority of the season while sitting this guy. The Jazz are also blocking fewer shots this season than last (6.3 down to 4.7). The Jazz used to be Swat Lake City (#4 in total blocks in 2012-2013) and are now in the bottom half of the league (#18).

Defensive rebounds and blocks are what Gobert can do. And he has demonstrated that.

And if you get defensive rebounds and blocks your defense shuts the other team down, and your offense gets a chance to counter attack.

But hey, I'm not the head coach, and I don't know what the team's real goals are this season. I do know a few things though.

For the season he has played in 31 total games, and 365 total minutes. He wasn't injured at all this season, or suspended. And for the record, Brandon Rush -- who isn't going to be back next year unlike Rudy -- has played in 33 total games and 389 minutes.

Here's how it looks game by game this year. 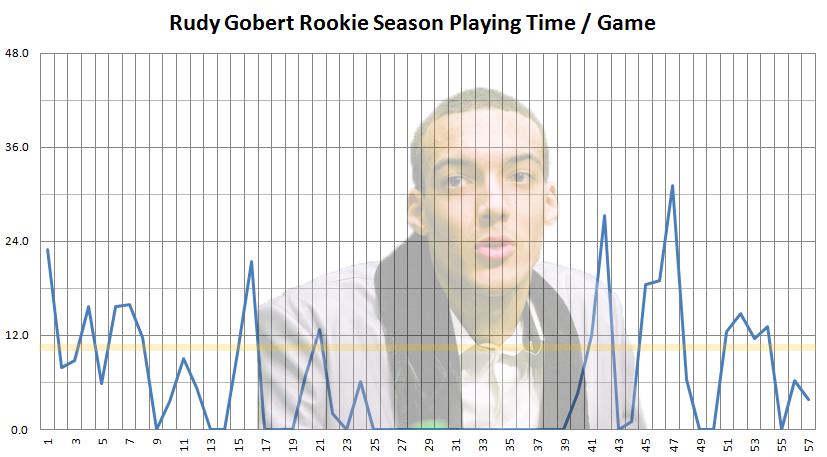 So, is Rudy really good -- our brain trust seems to think so. So good that our head coach was told not to play him? Or is Rudy not really good, and just because "the things he is good at are the things the Jazz are bad at" doesn't mean anything? One thing to do if you want to keep losing is to not change anything. If it's broke, don't fix it. Almost every time Rudy gets big minutes he produces, and then he's left on the bench for a few games. And we continue to lose.

Or does Rudy playing lead to Rudy having good stats, but his stats don't help us win? (Which would be hilarious if true.)