The Utah Jazz season is really taking shape now that we've had some level of healthiness for weeks upon weeks at a time. It's nice to have that consistency of knowing who is available to play every day, and it not only brings needed structure and stability to a young group; but it also affords those of us who analyze the team with needed data that's somewhat useable. If you've been paying attention the Jazz schedule this season did few favors to them. November and December were brutal, and then January and February were much easier. March is another beast that we're going to have to deal with.

In February the Jazz went 5-7. Back on February 1st I predicted that they'd go 4-8. So I was off, but not by much. The Jazz had an amazing win against the Miami Heat, and followed that up with wins against the Los Angeles Lakers, Philadelphia 76ers, Boston Celtics, and Phoenix Suns. The Heat game was one of the best games this season, but as we know from playing the Heat, we kind of have their number more than we should. We beat them one out of every three games it seems. We just don't play them frequently enough for other people to care.

The other four wins were against hurt teams, and they were mostly all playing in the third game in four nights. We call these schedule losses when we're the team getting dumped on, so I have to be objective here and downplay these wins a little.

But a win is a win, and these are, implicitly, the things we should care about most. 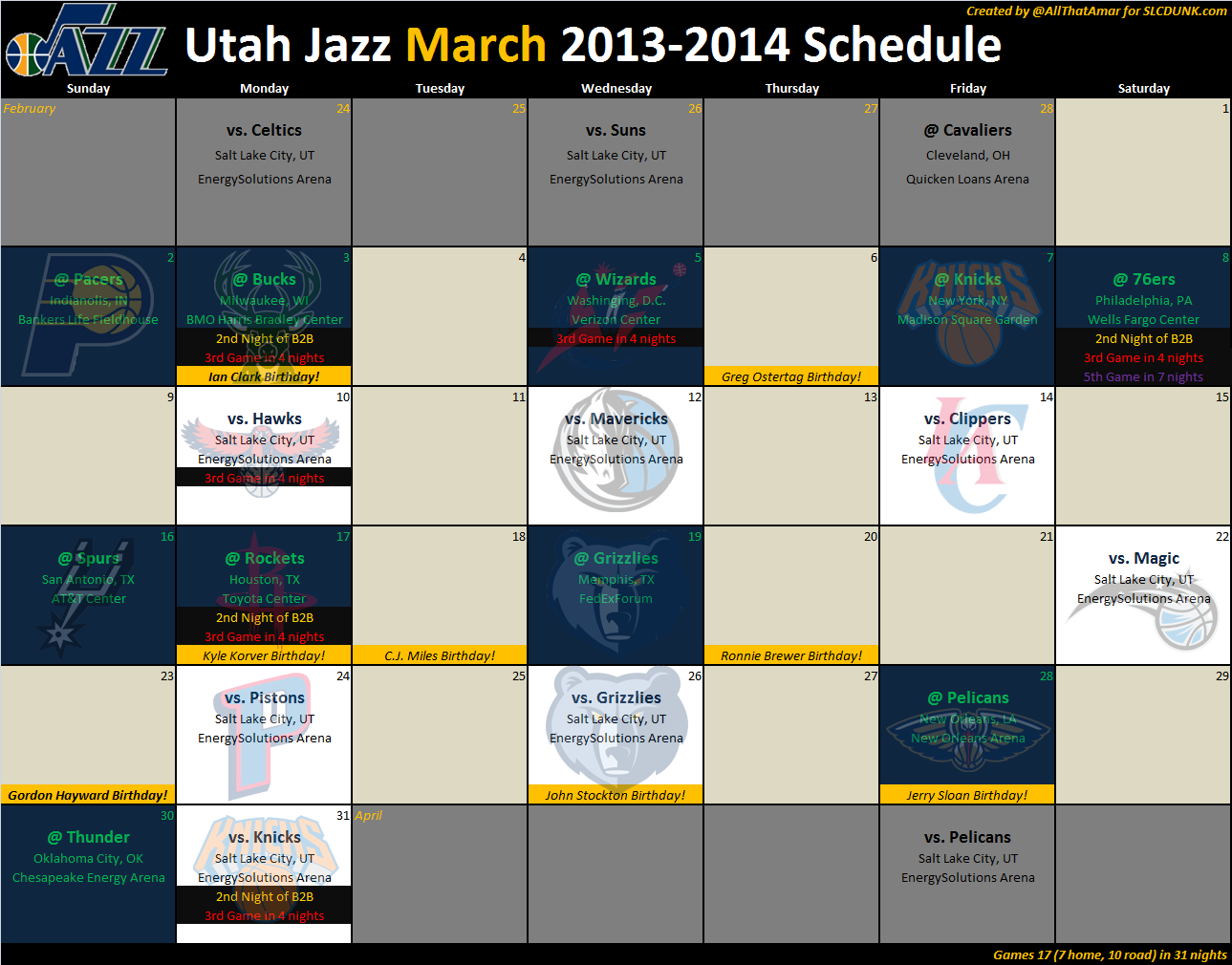 This week deals with games 2 to 5 of the 6 game road trip. The Pacers game is starting soon, and they are the best team we face this month. The Bucks and Knicks are in trouble, and the Wizards are really playing well right now. Over all, not a bad week despite whatever fatigue the team may have.

This is the end of our road trip and a nice three game home stand . . . against . . . three current playoff teams. Yikes. Welcome home, Jazz! Philly will not let themselves beat us, so that's a win. The Hawks are super injured inside and can expect that they'll be easy prey. The Mavs and Clippers will give us trouble though. Still, over all, not a bad week.

Only three games this week, but it's a back to back set and then a third game in four nights. And all of these three teams are good, and we're on the road for each of them. I predict some losses here.

Four games this week, against some pretty awful teams. Three of the four are at home. And none of them are in back to backs or anything. Still, I can't make myself think the Jazz will roll these squads. So I'm looking at a split here.

The last two games of the month, against two teams going in different directions. I would be great to see if we can off the Knicks twice in the same month. So I'm giving the Jazz the benefit of the doubt here, and a 1-1 split.

So I guess I think that the Jazz will go 7-10 for the next month. As always, I don't have the ego to think I'm right about everything. If I could predict the future I wouldn't be using my powers for a Jazz blog, I'd be trying to help deal with things like economic stability of third world nations or whatever. But still, how many games do you think the Jazz will win?