The game was so close and the Jazz came oh so close to winning.

I don't think anyone expected this game to go as it did. Just two nights ago the Jazz looked like a D-league team against the Cleveland Cavaliers, tonight they hung tough with the best team in the NBA. The Utah Jazz lead the Pacers for nearly the entire first half, even holding a one point lead at halftime. The Indiana Pacers stepped it up in the 3rd quarter, outscoring the Jazz by six to take a 75-70 lead going into the fourth.

The Pacers extended their lead to as much as eight, but the Jazz did not give up. With 7.3 secs left Hayward hit a nice jumper to pull the Jazz within two, on the next Jazz possession Hayward hit a three to help the Jazz pull within one. Evan Turner of the Pacers hit both three fouls after an Alec Burks foul to extend the Pacers lead to three. Jazz without a timeout left lost precious seconds of the clock, as the Pacers deflected the ball out of bounds. Quickly Hayward attempted a three once more but was unable to connect and the Pacers walked away with the victory.

Here is a screencap of the Jazz broadcast of what the starters did (aired with about 30 secs left, so Hayward finished with 21 points not 16) 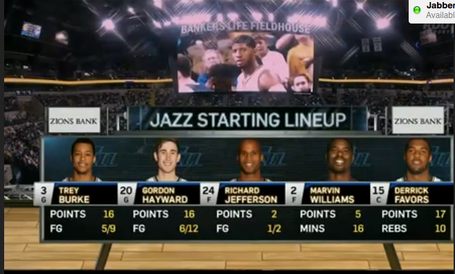 Credit to them, they played a good game

Great game for us tankers. Also great game for the future. Go Jazz!  We'll see you all tomorrow night when the Jazz look to beat the Milwaukee Bucks in Milwaukee!