NBA Playoffs 2014: Can Any team catch the Golden State Warriors in the bottom of the West?

Golden State is trying to fend off the Memphis Grizzlies, Dallas Mavericks, and potentially the Phoenix Suns to hold onto the #6 seed in the Western Conference. Can they do it?

Share All sharing options for: NBA Playoffs 2014: Can Any team catch the Golden State Warriors in the bottom of the West?

In Utah Jazz -land we care deeply about the Golden State Warriors. Why? Well, we care because in the off-season three team trade between the Jazz, Warriors, and Denver Nuggets the bounty we received for taking on the salary dumps of Richard Jefferson ($11m), Andris Biedrins ($9m), and Brandon Rush ($4m) were a few draft picks. One of the draft picks Utah traded for was the 2014 1st rounder for the Warriors.

So, if Golden State makes the playoffs, the pick is not going to be worth as much as it would have been, in the possible future where the Warriors miss the playoffs.

After looking at their relative strengths, weaknesses, current playing style, the games remaining, and who is healthy it's safe to say that the Warriors aren't going to miss the playoffs. Worse still, the Memphis Grizzlies, Dallas Mavericks, and Phoenix Suns aren't going to be able to catch them either. So we're going to get a less than awesome pick from them this season. (List of the types of players drafted that low, historically, available here.) (TL;DR version: most likely the pick will be in "1 in 3 chances to pick an NBA rotation player" range)

Here are the standings right now:

And please notice that the Warriors play the fewest games left. They have time to rest. They average out to playing 0.44 games per day, which is the lowest compared to their competition; Memphis (0.57 gpd), Dallas (0.48 gpd), and Phoenix (0.52 gpd). Golden State and Dallas play the most of remaining games at home as well, Golden State 7, Dallas 8. But remember that Dallas does play one extra game.

Back to backs left:

Golden State is without Jermain O'Neal (C), Festus Ezeli (C), and Andre Iguodala (SG/SF). Iggy will not play until AT LEAST March 28th. Do you know how many games GSW plays between now and then? Just one.

Memphis is without Quincy Pondexter, but he was out for the majority of the season and isn't a problem to worry about right now.

Phoenix does have Eric Bledsoe back, finally, but are now without Leandro Barbosa, and have not seen a minute of action all season long from Emeka Okafor.

How it may all play out: 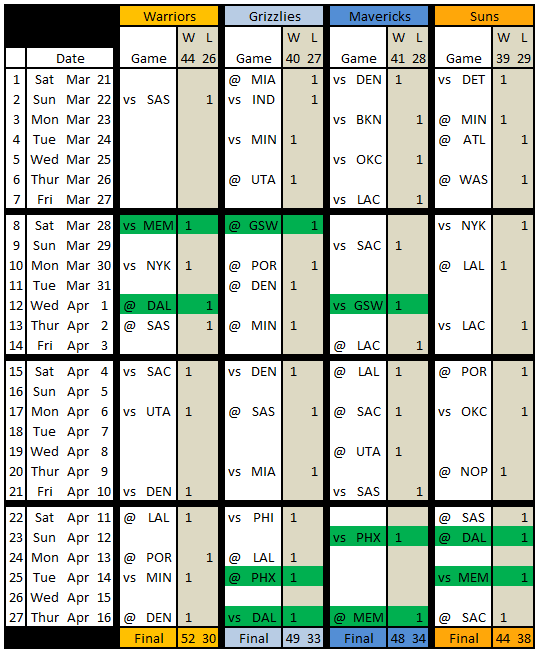 For the sake of our pick, I sure hope not.