The Downbeat #1312: The Future All Star Edition

Share All sharing options for: The Downbeat #1312: The Future All Star Edition

Randy Rigby agrees with most of us that the Jazz need to be tougher. (via Moni)

I want, I’m hoping we can s–keep seeing some more toughness from our guys. I, you know, I talked with our coaching staff a little bit after the [Detroit] game.

I wanted to see, I thought there was a hard foul in that last game when Gordon [Hayward] got almost a breakaway call, and then got a hard foul underneath the basket. And he, and it was a hard foul from the Pistons.

And I was hoping to see a little more toughness as Gordon got up and, wou–I’d've liked to see him in their face, where, or our other players get in their face a little more and say, "Hey, you don’t do that to our players, in our building, you know, like this." And it’s not, it hasn’t happened yet.

I agree with Randy and we have talked about this a lot lately but it was nice to see that Randy feels like most of us feel. Our team is lacking that toughness. Our team lacks the player that is wiling to get in the face of an opponent to stand up for a teammate. i think we have seen enough of Gordon to know that he is not that tough guy. Gordon has even shared many times that he works very hard at keeping his composure during games (very admirable) and it seems like keeping his composure means to not show toughness, to not stand up for teammates that's fine. We do need a player though that does that. Maybe it will be Trey? Derrick?

Who is the tough guy on our team?

Memphis's head coach Dave Joerger and starter Zach Randolph had incredibly nice things to say about Enes Kanter and Derrick Favors after the game on Wednesday. (via Jody Genessy)

"They competed. When you look at Enes Kanter and Derrick Favors, they tried to say to Marc and Zach, ‘We’re the new bigs on the block and we’re coming,’ " Joerger said. "They were fantastic all game long and especially in the first half. Very active, very aggressive. (They were) going to the rim, scoring around the basket and getting offensive rebounds."

Joerger then reiterated his projection for the Jazz, saying, "They’re going to be a good team going forward."

"They got some guys, Kanter and Favors, they’re going to be All-Stars," said two-time All-Star Randolph, who had 22 points, 13 rebounds and made the clinching free throws Wednesday. "They’ve got a great upside."

Love the praise that Kanter and Favors are starting to receive.

Who has the greatest chance of becoming a future all-star on our team?

Randy Rigby had great things to say about Marvin Williams:

Which Jazz player has impressed you the most this year?I will say this, that I’ve been impressed with, and he’s, but again, he’s not one of our younger guys, and I think that’s how you learn how to do this. I felt Marvin Williams has been a stronger player for us this year, and provided more leadership for us, which I’ve appreciated this year.

Aaron Falk wrote a nice piece about Marvin and what he means to the team:

"Marv’s definitely one of the leaders on this team," rookie Trey Burke said. "He’s a guy that everyone listens to when he’s got something to say."

"It’s invaluable," Jazz coach Ty Corbin said. "You see and recognize numbers, but the little things he does with this group — his presence, his voice in the locker room — those things are invaluable when you look at the overall scope of trying to keep the guys on the same page and trying to get better."

Do you want Marvin back at the right price? What veteran roll player could you see coming to the Jazz via trade or free agency?

Basketball John (@5KL) reminded us that a few days ago was the two year anniversary of the crazy 4OT game against the Hawks. (H/T Moni) 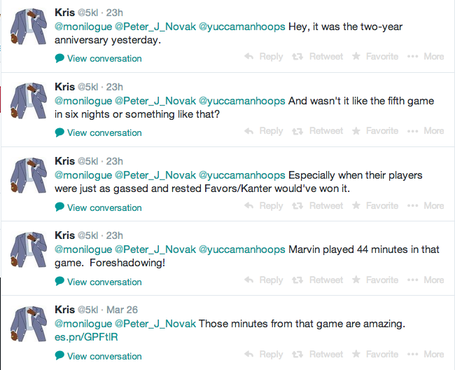 Box score from that game:

Crazy! Some of those minutes we haven't seen the F5 play that many minutes together yet his season ( kidding but a few weeks ago I wouldn't have been.

Here are the shots of why the game wouldn't end:

I think Ty has gotten a little better about minute distribution for the most part since that game. It seems that since the Jazz have been eliminated from the playoffs, Corbin has been using an eight man rotation or sometimes a seven man rotation. Is it possible the players were tired against the Grizzlies? How do we feel about shorten rotations? I don't know I kind of like the shorten rotations because I have always thought they were kind of too all over the place. I don't know if this is the time to do it , but maybe it is. I am happy that Kanter is starting and the F5 (- Burks) is seeing minutes together. Is it good to build chemistry for next season? Besides Rudy Gobert who should be included in the rotation?

What else has Ty improved on in two years? What could Ty bring next year as an assistant coach or possibly a head coach for a different NBA team?

Game Day! The Jazz play the Pelicans tonight. We only have 10 games left. What has been your favorite game of the season? Or are you done thinking about this season enough with it already!