New York Knicks look to return back home with another win, play the Utah Jazz

Share All sharing options for: New York Knicks look to return back home with another win, play the Utah Jazz

Do you remember the good old days? These days?

Yeah, maybe not exactly those days . . . but days when we were in the playoffs. Why were the Utah Jazz in the playoffs? They were there because they were LED their by a lotto pick point guard. The Jazz made the playoffs in Deron Williams ' second season in the NBA. This year is Gordon Hayward and Derrick Favors ' fourth years. It's Alec Burks and Enes Kanter 's third years. Trey Burke has played his heart out, but there's only so much a rookie can do.

What we've seen is that these young guys aren't at that level yet where they can consistently carry a team to the playoffs. But let's be real here, Balake, not even D-Will, Memo and Booz could carry these bench guys to the playoffs. The 2013-14 team was not built to succeed. And this team hasn't.

For the Jazz to move back towards actual success, and win playoff games again, it's going to take strong leadership and a dedication towards putting resources towards making our players the best they can be. I feel like an argument can be made that suggests that the Jazz did not pull out all the stops to make these young guys better. Instead they went for the short term goal of trying to be as good as they can "now". We're still seeing that. At the end of Deron's rookie year Jerry Sloan was playing C.J. Miles more minutes -- a rookie second rounder -- with the hope of identifying more about him for preparation for next season. I don't know if our current head coach is doing any preparation for next season. And that's why you only get Ian Clark in games if it's a blowout.

Thankfully for the Jazz, every fifth loss is.

For the Knicks, as covered earlier, they are on the last game of a long road trip. I would suspect this one is going to be pretty close. The Jazz are missing only Andris Biedrins. The Knicks are without Andrea Bargnani and Kenyon Martin (two #1 picks!) -- and Carmelo Anthony hurt his hand last game.

It'll be close, I presume. 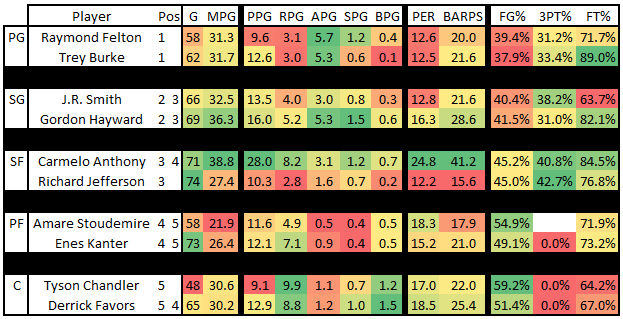 Their bench and our bench are both bad benches aside from the bright spots of Alec Burks, Tim Hardaway, Marvin Williams, and Iman Shumpert. We're at home. They're on the road. They're tired. We're the worst team in our division and conference. Tyrone Corbin and Mike Woodson are both interesting coaches.