If you didn't watch this game you don't know that this game wasn't really close. Only watching this game could you truly respect the tank job that the 76ers performed to lose this game. So many obvious turnovers, too many balls that went right by them without any effort to recover any. So many point blank misses. You look at the box score and see that Philly had tied the game with two minutes to go and you'd think they tried to win. Watching the game you'd know that's not the case.

(Just told my daughter the final score. Whoa a 104 points for Utah that's good for THEM, it must be a record)

I am happy for the players. I can't imagine how low they would be feeling if they came home 0-6 on this roadtrip. I am truly happy for them. I am sad for the tank and for us fans. Any questioning of Ty's coaching that would have happened by the media if the Jazz would have went 0-6 on this road trip is now gone. All we will hear about now is look how they fought back, do you know how hard it is to win on the tail-end of a back to back after 9 nights on the road? How amazing is Ty that he got a win from this squad when everything was stacked against them? How did Ty keep them focused?! We will not hear about the previous five games, including blowout losses to the Bucks, Wizards and Knicks. We will not hear about the nonsensical defense and offense we saw on this trip. Nope the Jazz media will be singing Ty's praises all because they beat a team that is trying to set the record for consecutive losses to end an NBA season.

1) We closed the game with BBHFK! Ty at one point in the 4th replaced Favors with Williams but Ty smartly realized that the 76ers were taking advantage of Williams and quickly replaced him with Favors. Going along with that the only players to see the court in the 4th were:

For the game overall I think we cna be happy with the minutes for the most part.

2) This gif from Moni. I love our players.

Burks was asked if Ty drew that corner three for him. Burks response "It just happened"

Enes was very happy in the post game, all smiles. He said it felt good to play with his boy Derrick!

1) This win hurts our tank. I am sooo happy for the players so it shouldn't matter but it hurts a little. Going along with that, i don't know how much we can learn about our team from this win because it was against a tanking 76ers team. I love the way the Core Four played and Garrett but the rest of the team still didn't shine.

2) Trey Burke- Trey only scored seven points, he did not have a good game. Michael Carter-Williams also struggled, scoring only two points. It was not a good head-to head meeting for these Rookie of the Year wannabes.

3) Hayward not too happy with Ty in a timeout. (gif via Moni)

Maybe its nothing. Its probably nothing. We got the win so none of it matters anyways. This win will go a long way in healing any hurt feelings that have happened since the trade deadline and of course this road trip.

The Jazz finish the road trip 1-5. I am pretty sure that was what I voted for in one of Amar's posts but I had us beating the Bucks. The Jazz's next game will welcome back Paul Millsap, Kyle Korver and DeMarre Carroll to the ESA as the Jazz take on the Hawks on Monday night. 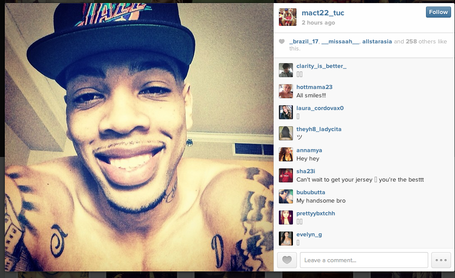 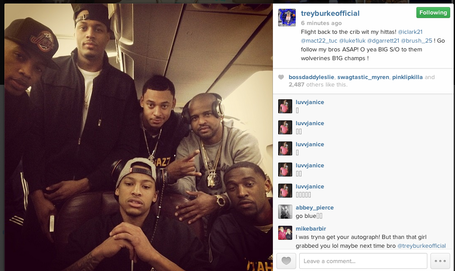