NBA Draft Lottery: How the West will be lost

The Los Angeles Lakers, Utah Jazz, and Sacramento Kings are all at the bottom of the Western Conference standings. When all is said and done, who will be at the bottom?

Share All sharing options for: NBA Draft Lottery: How the West will be lost

After training camp but before the preseason games started I was worried about the 2013-2014 season. I felt like the Utah Jazz would be bad. I also felt like the Sacramento Kings would be bad. And I also felt like the Los Angeles Lakers would make a late push for the playoffs. I was wrong on all three accounts, as all three teams have been flat out awful this season. I'm not being a hater, I'm just looking at the numbers. With one month left to play the Jazz have a winning percentage of 30.7%, while the Lakers are at 34.2%, and the Kings at a lofty 35.1%. That means going 3-7 every 10 games. And specifically now in April, that means that these teams have between 23 and 26 wins each.

We've covered this before, but the Jazz at 23 wins could end up tying the franchise record for worst ever EVER season ever. That record was set back in 1974-75, back when Greg Oden was only in his early 50s. (Why have we not done more Greg Oden is an Ent stuff, not just within basketball fans on the internet, but just in general as a civilization?) This season with the Lakers at 25 wins could be their franchise worst ever in the 82 games era. Sadly a 26 win season would only be tied for 11th worst in Kings history.

All of these teams are losing, consistently. Injuries come and go, but one thing will remain the same -- you have to play the games. So let's take a look at their remaining schedules and see where they'll rise and fall. 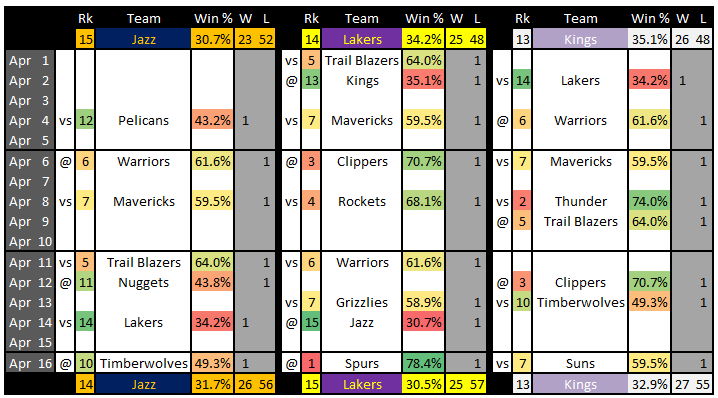 This is the worst case scenario -- LAL will lose every game, and SAC will lose all but one. And the Jazz, our Jazz, will do just enough to be close but no cigar when the music stops. The Jazz are going to beat the New Orleans Pelicans at home. Pellies are hurt, and we have a few days off before the game. Also it's hard to lose to the same team twice in a short succession. (We did against the Minnesota Timberwolves earlier this season, but that, I think, was a no- Derrick Favors having fluke.) Utah will drop games against the Golden State Warriors (also injured but playing at home) and the Dallas Mavericks. After a few days off they play a back to back set with the Portland Trail Blazers and then on the road against the Denver Nuggets. I actually think the Nuggets could lose this game, but we're really bad on the road this season (this decade).

Then we get the big showdown, against the Lakers in Utah, on "Fan appreciation" night. We're going to win that one. And then we're probably going to win the last game against the Timberwolves as well, as Kevin Love will sit out and they'll try to be the 11th worst team instead of the 12th worst or something silly like that.

Again, this is the worst case scenario, and the worst case scenario is that the Jazz will end up 14th best in the West this year. The Jazz play the easiest group of teams (average Western Conference rank is 9.29, LA plays teams with the average rank of 6.78, while Sacramento will play teams with the average ranko of 6.75), and outside of @GSW, vs DAL, and vs POR, every game is up for grabs. (N.B. As of today DAL, MEM, and PHX are all tied for the 7th seed in the West.)

Is 14th in the west bad enough? Well, it probably means being the sixth seed for ping pong balls behind the Milwaukee Bucks, Philadelphia 76ers, Orlando Magic, Los Angeles Lakers, and Boston Celtics . . . and is that going to be good enough?

The good news is that the worst case scenario is unlikely to happen. I was worried that the Jazz would beat the New York Knicks last night, a tired and injured team on a long road trip, but they didn't. So I have hope that the Jazz aren't also going to finish the season 3-4 either.