The Downbeat #1330: The Dennis Lindsey is Freaking Awesome Edition

Locker clean out, the off season and Alec Burks. Brought to you by your Miserable People of SLC Dunk.

Share All sharing options for: The Downbeat #1330: The Dennis Lindsey is Freaking Awesome Edition

Okay here we go second Downbeat into the off season. The off season that we have mostly all been dreaming about since the beginning of the 2013-2014 season. We will soon know the direction the team is going with regards to our head coach, the draft and FAs, there are so many things to be excited about in the next few months.

Yesterday Amar posted Utah Jazz end of season Jam Sessions Part 7: What did we learn?. Everyone had good things to say. I wanted to spotlight what Amar said and comment on it.

AllThatAmar: I learned that the Utah Jazz franchise will still take the middle path instead of committing 100% in a direction, and as a result, they will not do what it necessary to win a championship. They are too afraid to go 'all in', and that's why the Jazz just went from a 96% shot at a Top 5 to a 69% shot in the span of a week or two. Because of pride and a desire for short term gratification, over delayed gratification.

I have to say that it took me a long time to see and agree with this point of view. I remember specifically having a super long discussion with my husband, Lou about this very topic. Lou asked me if I believed if Larry (he was still alive) really did all he could to win a championship. I said yes, Lou said no. We discussed and discussed and discussed it. I believe it was in 2008ish when I started to see that maybe I was wrong and looking back seeing the things that weren't done that could have lead us to the promised land. Then of course reading Larry's book where he said as much and now Stockton's book with the same sentiment.

Yesterday was of course locker clean out. It was the first time all season that I had listened to 1280. I normally would just wait for Moni's recaps but for some reason I really had the desire to listen to it live yesterday. Just a few things that were said that really stood out to me from the 1280 guys that you wouldn't hear just listening to the interviews posted on their site.

Did anyone else hear anything interesting while listening live that were not in the interviews?

Moni of course has us covered with the interviews.

I am sure there will be more throughout the day. So check out http://jazzfanatical.wordpress.com/ for all your locker clean out coverage needs.

Enes Kanter's and Gordon Hayward's interviews were the most talked about interviews.

Gordon talked about how the Jazz should have played at a faster pace and how they should have used their athleticism more. Gordon also delved into rotations a bit.

Enes talked about rotations a lot Enes said how he felt that the Jazz didn't live up to their word because in the offseason he along with the other four young players were told that this season was going to be a rebuild and a season of discovery, how they would be the key players. Enes said how since they weren't going to win the championship and how wins didn't matter there is no excuse for the five young players to play as little as they did together. I LOVED how Kanter held his own with Locke. I loved that he disputed when Locke started to play "devil's advocate". Even though we all know that is how Locke really felt (*eyeroll*) Locke attacked him saying that Favors was a better player with Kanter off the floor and how Kanter did NOT help the team win. Dennis Lindsey of course said the exact opposite (agreeing with what Enes said) to Locke in his interview and Locke of course agreed with him.

What were your favorite interviews?

Burks is in for a big offseason. If the Jazz were smart they would convince Burks' mom that signing an extension with the Jazz is the best thing for him. Here is an article from after Burks' freshman year saying as much. (H/T Moni)

"New coach, I wasn't really adjusted to it at first," Burks said Friday as the CU men's basketball program launched its first season under Tad Boyle.

"I was about to check my options, but he talked to me; he went out there and saw my mother. That was a big thing. I feel like I can trust in everything he says. He's a real person. He talks to you real. He wouldn't lie to you. So I like that about him."

That trip to Grandview, Mo., was the best move Boyle has made so far. If you want to convince Alec Burks of something, you'd best convince Dina Burks first.

"Everything I do, I consult with my moms," Burks said. "It's the most important person in my life. Without her guidance, I wouldn't be here."

Wow. Ty saying openly that there were some things he wished were "handled differently." 1st time I’ve heard him sound like an outgoing coach

Ty went on to say via Des News:

More from Corbin: "The organization decided to go in a different direction with the guys we had a year before. I knew it would be difficult. I said right from the beginning that there's no way when you've changed the roster like the way we've changed it is good for the coaching staff, especially in the last year of their contract."

Corbin: "You see why coaches that have been in for a long time won't put themselves in a situation where they have a young team..." "It doesn't matter how you scheme things when you have young guys. Young guys make mistakes in this league.

And of course this now famous quote: 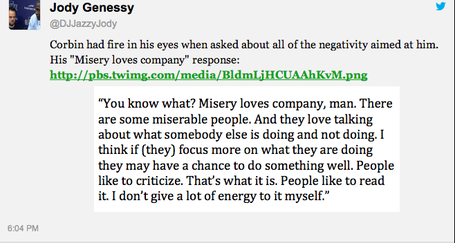 It seems like Ty was really trying to protect himself and not take any of the responsibility for what happened this season.

Dennis Lindsey had a different approach: 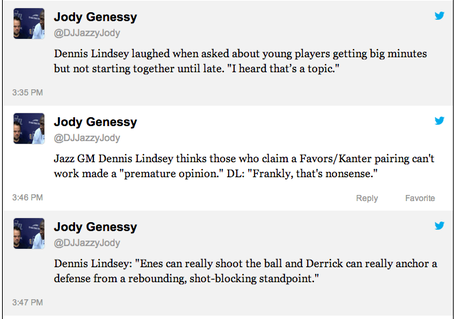 I like Dennis. See his full interview here, it is great. You can check out all the media scrum videos on utahjazz.com here. It's worth it to watch even if you listened to 1280 yesterday. The media scrums have different feel and different info than the Locke interviews on the Zone.

Thanks to Jody Genessy, Steve Luhm, Billy Lea and everyone else for all their coverage of locker cleanout.