The Downbeat #1317: Owners, Leapin' Leaners, Age vs Quality, and Diante

The Downbeat #1317: Owners, Leapin' Leaners, Age vs Quality, and Diante

Share All sharing options for: The Downbeat #1317: Owners, Leapin' Leaners, Age vs Quality, and Diante

Leapin' Leaners was last night. Here are some pics from the event . I love that Jazz have this tradition. It certainly doesn't make up for a less than stellar season on the court, but the autograph parties, Junior Jazz visits, reading contests, NBA cares programs, Primary Children's visits, and many other off the court events make me be proud to be a Jazz fan.

Diante Garrett wants to make Utah home, hopefully the feeling is mutual. From Aaron Falk of the Trib

"They’re crucial moments for everybody," Jazz coach Ty Corbin said. "Everybody’s still being evaluated. Everybody’s still watching. There are 29 other teams. I always tell the guys, you’re not just playing for us and yourselves. You’re playing to be looked at by the other 29 teams. So you’ve got to try to make sure you’re putting your best foot forward."

For now, Garrett is focused on impressing the Jazz.

Said the point guard, "I think I did a pretty good job coming in and showing what I can do. Just getting an opportunity, that’s what I’ve been waiting for."

.WEWe talked about this in Podcast a few weeks ago. Jimmy and I both think the Jazz should pick up the option on Garrett. He matches up well with taller point guards and helps bring some grit and toughness off the bench. His option is only 915,243 dollars. This means we could keep him on the roster all summer and through training camp and make a decision then. The risk versus reward seems like a no brainer here.

The relationship between age and team success in the NBA - SBNation.com First of all, let's give Tom Ziller some credit as well as a huge thumbs up to the basketball reference database team for making this possible. 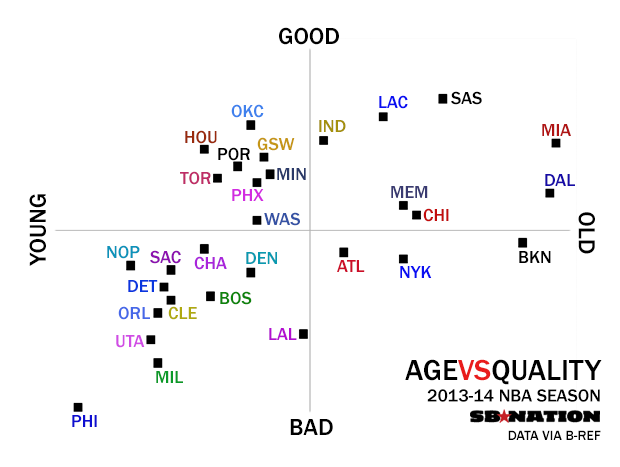 So this is obviously a quadrant chart and I am not going to explain how it works. It is pretty self explanatory. It would be interesting to go back five years to see how these teams evolved based on the growth and development of the players. Interestingly enough there are only three old bad teams. The Jazz are in the cluster of bad young teams. I may play around with some Google motion charts to see if I can add more information to this.

Espn ranked the front offices, now they are rankings the owners. Here is the explanation and justification. Greg Miller falls into the up and comers group...

How important is an owner?

This finding fueled discussion among editors. Were panelists undervaluing the significance of a quality owner, or should we price that into the front office, which, after all, is generally assembled by ownership?

Amar sent some questions out today via email. I like one so much I thought I would add it here. What three things did the Jazz do this year, that you hope they will carry over to next year?