The Downbeat #1340: The Sterling and Silver Edition

The fallout from the Donald Sterling decision (and the Jazz's reaction), more coaching prospects, one Jazz role player's future, your FanPosts, and more.

Share All sharing options for: The Downbeat #1340: The Sterling and Silver Edition

Well, then. Yesterday was certainly a busy day in NBA circles, even if the Donald Sterling case doesn't affect the Utah Jazz or fans as directly as some.

I don't think I have a lot of analysis to give on NBA commissioner Adam Silver's decision. In case you were living under a rock yesterday, here's the backstory on the Sterling incident, and here are the details of the ruling:

(And here's the transcript, via nba.com, if you'd like to read the nitty-gritty.)

That latter indication from Silver was borne out by the statement from Utah Jazz owner Greg Miller:

"On behalf of the Miller family, we support the decisive action by Commissioner Silver and the NBA to reaffirm that there is no place for racism and hatred in our league,'' Miller said. "The Jazz organization and all the teams in the NBA should act as national leaders in promoting inclusiveness and diversity. We have a responsibility in our communities to fight against discrimination and ignorance and showcase sports as an example of respect and tolerance. While this situation has been inexcusable, I hope it serves the greater purpose of reinforcing our vigilance against this type of behavior."

The Jazz also changed the splash image on their homepage to match the Clippers: 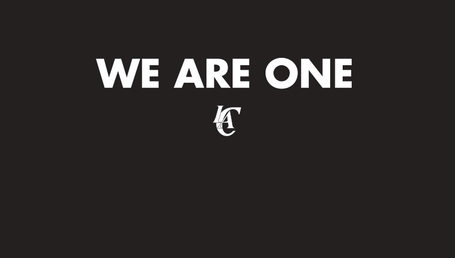 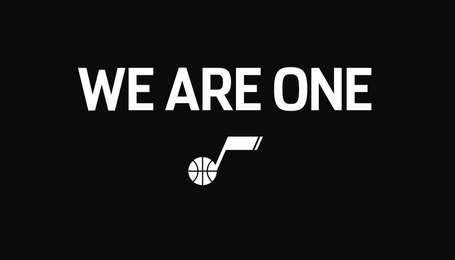 Classy moves from our organization, to be sure.

As I said earlier, I'm not going to over-analyze this. There are others who can do that better than I can; I'm a reporter by training and persuasion, so I'm better at reporting the news than giving commentary on it. On top of that, as a single white male who grew up in Utah, it's probably not my place to pontificate on anything race-related.

So speaking for myself, I'll just echo the sentiments of Greg Miller's statement: I fully support the firmness and severity of Silver's ruling. I believe that the kind of attitude Donald Sterling has shown, in these recent statements and throughout his life, has no place in the NBA or in society. And the league will be a better place without him.

(By the way: In honor of Craig Ferguson announcing that he'll be leaving the Late Late Show, all of today's gifs will be Fergy gifs. You're welcome.)

I'm sure we'll be hearing a lot more about the ramifications of Commissioner Silver's decision in the coming days -- Sterling won't sell the team quietly, in any case -- so we'll try to stay on top of that as far as it affects the Jazz.

On to more Jazz-centric topics. The Trib's Tony Jones has given us this look at the future of backup point guard Diante Garrett in a Jazz uniform:

Garrett played almost a full year with the Jazz, backing up Trey Burke, averaging 3.7 points and 1.8 assists per game. He's had very good moments. Most will agree that he proved that he can play at the NBA level.

But has Garrett done enough to find his way back to Salt Lake City next year? A lot will depend on the coming months and what the Jazz roster will look like.[...]

"For as much as I've gone through, the one thing I realize is that as hard as it is to make the NBA, it's that much harder to stay in the NBA," Garrett said. "I know that I got better as the year went on, and I thought I did a pretty good job. I got stronger, I got more experienced and I was able to get guys in the right spots on the floor."

While, as Jones notes, the Jazz have multiple options at point guard, including bringing over 2013 draftee Raul Neto or drafting another new point this year, I hope the team hangs onto Diante. Do you remember how absolutely vile the Jazz were in the first 15 games of the season, with John Lucas III and Jamaal Tinsley in the backcourt? Garrett was a revelation from the moment he put on Jazz blue. His seven-point, five-assist performance in his first game made it instantly clear that he was the Jazz's best offensive facilitator sans Trey Burke.

If I were to toss out my subjective bias, I'd probably say that Garrett is a fringe NBA player, decent as an insurance-policy third PG but likely no more. Still, I think he played hard and smart with a good eye for distribution, and he would provide that insurance policy for a low price, assuming the Jazz bring in Neto or another young point with more upside.

What do you guys think? Is Diante worth keeping around next season? Or can the Jazz do better at backup PG?

FanPosts! We start with JuMu, who examines the top of the 2014 draft class to see who might fit best in Utah:

The Lowdown: This young man is the top guy that most GMs have been drooling for all season if not longer. He is a 6'8" 19 year old 2nd team All American with off-the-charts athletic ability ideal for transition play. He averaged 17 points and 6 rebounds per game off of 45 FG% and 34 3P%. The question mark surrounding him is his tentative, unaggressive habits that can lead him to disappear from the game for stretches at a time which could hold him back from being an all time great.

Where Would He Fit In: Wiggins would be a lock for the starting small forward spot on 27 NBA teams already as a rookie! (Heat, Thunder, and Pacers are the 3 where it would be questionable) The likely starting lineup for the Jazz would be Burke at point guard, either Hayward or Burks at shooting guard with the other coming off the bench, Wiggins at small forward, then Kanter and Favors as the bigs. We could basically see a rotation similar to this year but with Wiggins being in RJ's a place, in other words, the biggest upgrade of all time! This is THE PLAYER that could lead us to contender status within 1-2 seasons. However, I could see Hayward or Burks becoming very expendable (from the front office's point of view) with this draft pick. Burks trade probability: 20%, Hayward trade probability: 40%.

JuMu's got a take on every player in the top eight, so click through for all of it.

The two correlate more than we think. Ante Tomic played under Messina for Real Madrid for a few seasons.

Could Linsdey be putting together a master plan to bring Tomic over?

Lastly, in this week's Ideas For Fixing Various NBA Issues department, marvin_is_joe has this plan to improve the early rounds of the playoffs in each conference:

To fix the Playoffs I believe the change is pretty simple and minor. The NBA would push back with tradition, travel, and ease of scheduling. I believe the top 6 teams in each conference get into the playoffs as they currently do however the final two spots in each conference be opened up to the entire league. My big difference is that the last 4 spots just go to the remaining best records and are seeded accordingly. This year it would have been assurance for Phoenix to make the playoffs instead of the lowly Hawks.

Teams would have to stop tanking... never mind thats a different problem for a different day.

The opening rounds would have to change a little to adjust to this playoff schedule. 1 seed plays 6 seed, 2 vs 5 and 3 vs 4. That occurs in both conferences and then the 7th and 8th seed play each other in each conference wild card to make it to the 2nd round and play the winner of the 1 vs 6 seed game. I believe it makes the playoffs more like the March Madness tourney because the 1 seed plays the 6th seed instead of the 8th seed. This season it would be Miami and Brooklyn, which would be exciting.

Speaking of coaching candidates, Laura Thompson from Salt City Hoops gives this look at current Suns assistant Mike Longabardi, first tagged as a potential candidate for the Jazz by our own Peter J. Novak:

[Longabardi] understands that a kind of situation where he'd get an opportunity would be one where he'd have to start from the ground up, similar to the position the Jazz are in now, and also similar to the position Phoenix was in a year ago. So he's got a year under his belt of building from the ground up, as well as experience in building a championship-winning, defensive-focused culture in Boston in his years before that. His response also reminds me of Brett Brown's comments discussed here earlier this month: he also understood that to "truly rebuild and grow something is going to take three to five years."

Based on everything I've read and heard, coupled with Phoenix's impressive performance this past season, Longabardi is at the head of my list of preferred coaching candidates for the Jazz. A real defensive maestro who could get the most out of our young, athletic core sets my heart a-flutter.

Last item: Jim Burton of the Standard-Examiner wrote this piece focused on what he calls the "Ex-(Jazz) Factor":

The new front office quarterback was right, there were some tough nights last season. And, yes, the Jazz certainly did choke down a lot of bitter medicine, all in the name of getting worse before they (cross your fingers) get better.

The 25-win season was difficult, sure.

The mistakes were tough to watch, of course.

The growing pains were painful, obviously.

But Jazz loyalists who thought their pain would end with regular season wasn't thinking about the Ex Factor.

What's the Ex Factor? It's the 14 ex-Jazz players who have or still are playing today, nearly two weeks after Utah's "Future Five" - Derrick Favors, Gordon Hayward, Alec Burks, Enes Kanter and Trey Burke - packed up and rode into the offseason.

It's certainly difficult to watch players like Paul Millsap, Kyle Korver and Al Jefferson flourish on playoff teams while the Jazz languish in lottery hell. But, as Burton goes on to say later in his article:

To their credit, the team's owners are attempting to get beyond the status quo. They decided merely making the playoffs wasn't good enough, that an overhaul was needed. Personally, I'm not convinced the Jazz will ever again make a deep playoff run, but I know this: for this franchise the surest and most logical way to make that happen was to break up with The Exes.

It's important to remember this -- perhaps you can say it over and over to yourself as you watch the Hawks attempt the upset of the Pacers, or as Wesley Matthews tears out Houston's heart. Being a fan of a rebuilding team takes a certain amount of faith to leap into the unknown. I disagree with Burton's conclusion that the Jazz may never again be a title contender. But I agree that the only way toward that goal was to push all-in on the youth.

So, even though times are rough right now, as Craig Ferguson would say, "It's a great day for America." If by "America" you mean "the Utah Jazz."

(And here's an entirely gratuitous Craig clip, just because it makes me giggle.)