Van Gundy goes to Detroit, Jabari might be going first, an argument for going back to purple, your Dunk writers going live, and more.

Share All sharing options for: The Downbeat #1352: The No Stan Van Edition

Welp. If you were on the #TeamStan train for the Utah Jazz's next head coach, it has officially derailed:

I'm not sure Van Gundy was ever really an option for the Jazz, especially since he seems to have wanted front-office control as well, and Dennis Lindsey isn't about to abdicate his throne.

The general assumption is that the Jazz won't start interviewing coaching candidates until the playoffs are over, since some of their options (i.e., Jim Boylen) are still involved in them. But that means the new coach would have very little time to prepare for the draft.

What do you think? Should the Jazz be moving faster in this process, since guys like Stan Van are getting snapped up?

Speaking of the draft, ESPN's Chad Ford and Kevin Pelton did a back-and-forth on the chances of Jabari Parker going first overall, and the kind of NBA player he will be. I like when Ford and Pelton write together, because Ford has the history of connections with scouts and team executives, while Pelton is one of the best stats guys covering the NBA. Anyway, here's Pelton on the issue of taking Parker or Andrew Wiggins with the first pick:

I've been torn on this question all season. Statistically, Parker is the choice. His WARP projection (2.6, third among likely draft prospects) is much better than Wiggins' (1.5). Yet I think that Wiggins' ceiling is much higher because with development he can overcome his weaknesses on offense, whereas I don't think Parker has the physical tools to be anything better than average defensively. If I had to make the choice today, I'd go with Parker. But if I were really in that spot, my decision would probably come down to workouts, interviews and everything that will transpire between now and the draft.

Of course, talking about Jabari and Wiggins is probably pointless, since the Jazz would have to move up in the lottery to have a shot at either player. The good news: the lottery is less than a week away. Commence finger crossing.

FanPosts! Just a couple today, but they certainly warrant mention. JuMu gives a timeline of upcoming Jazz events and tells us what we can expect, along with some predictions:

1. I think this will be our true growing pains season, where at least we'll actually get to see some solid development from our youth.

2. We'll do better this season with more talent, but still miss the playoffs by quite a bit. Finishing 11th in the West with a 38-44 record, over the Kings, Lakers, Nuggets, and Mavericks.

3. We will get 2 former top assistant coaches for the top of our new coaching staff. They will be defensively focused and try to implement a system similar to Popovich's but obviously come up short. (Nate McMillan + ???)

4. We slide to 5th in the lottery and draft Julius Randle. Draft Shabazz Napier with our 23rd pick, and Clint Capela with our 35th pick.

And Chase T Anderson makes a passionate plea for purple:

Jazz fans collectively generated buzz to bring back the musical note -- and it worked. Of course a quick color change or logo update can't fix more systemic problems, but (still) color is an important part of team identity and brand connection. What do you think? I say let's make this happen just as we made the musical note happen (again); a simple fix -- switch the deep blue with the familiar purple. No jersey changes. No court changes. No logo change.

I'm always up for a return to the classics. Thanks for writing this week, folks!

The New York Times has finally gotten around to doing one of its cool interactive maps of Facebook data showing the fan population for every NBA team by geography. It looks about like you'd expect: 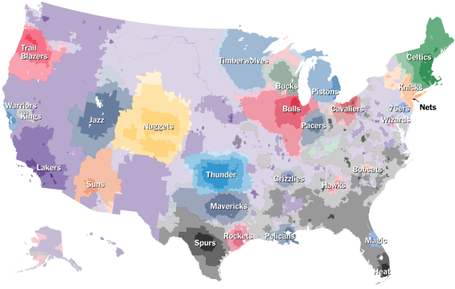 The swaths of purple represent EVIL PEOPLE, by which I mean Lakers fans. I'm a bit disheartened that the Nuggets seem to outdistance the Jazz in their relative sphere, even encroaching into a few Utah zip codes (you can drill down to the zip-code level by clicking through to the NYT map). I'm also curious that the Jazz don't extend that far into Idaho.

Again, though, it's important to keep in mind that this is Facebook data, and that geography does not necessarily represent population. So you might have fans that don't use Facebook, or don't identify as a fan of a certain team on their profile, or a small number of fans in a rural area might appear to represent more than they really do. Anyway. Interesting to look at, but not terribly surprising.

Your humble Dunk writers are likely going to start doing some Google Hangouts in the near future, either live or as video podcasts to watch later. What are some topics you'd like to see us cover? Let us know in the comments, or hit us up on Twitter with discussions you'd like to hear about. Feel free to submit questions, too. Whatever you want!