The Downbeat #1354: The Cocky Star Edition

Share All sharing options for: The Downbeat #1354: The Cocky Star Edition

We all know that the talk this week is the NBA Draft Combine.  We of course have you covered at SLC Dunk for all your Utah Jazz and combine needs. Amar is doing a fantastic job of covering the event.  Make sure to check out @slcdunk on Twitter for your instant Jazz and combine updates.  Also check out the combine stream of all of Amar's combine posts.

I'd like to think that Dennis Lindsey and KOC are apologizing to Jeff saying we should have hired you but of course they are also  congratulating him on his awesome job in Phoenix.

NBA.com has nice info on the combine. They have the results of the first day of testing and skills challenges. 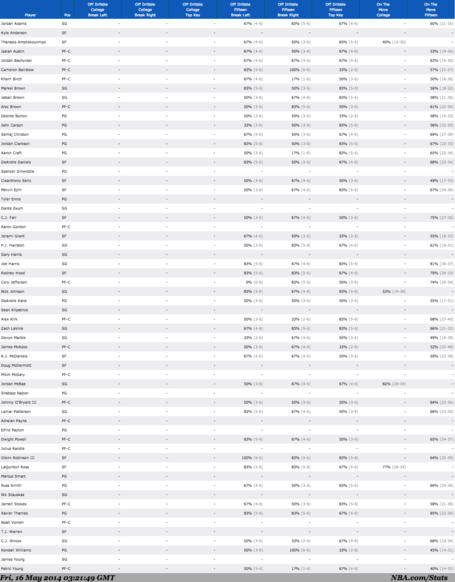 What is your favorite test during the combine? I really like the shooting drills obviously and I also for some reason like the shuttle run. What did you learn about the players from the first day of the combine?

The Combine seems to be a fun reunion for executives, coaches etc in the NBA.  Its fun to see familiar Jazz faces like Scott Layden and Greg Foster.  The night before the combine Jerry and Scott went out to Miller's Pub together. 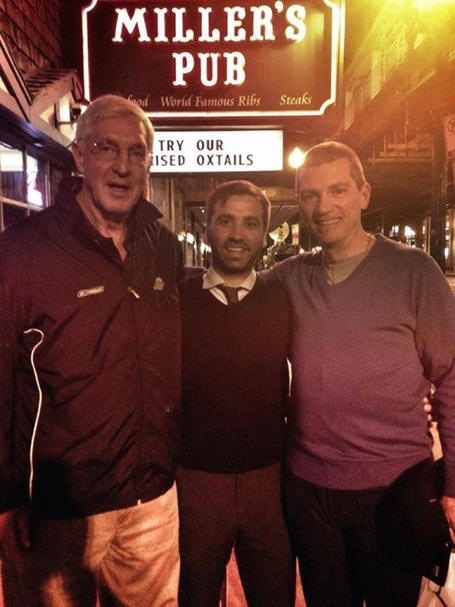 If you could go to dinner with anyone from someone with the Jazz (current of the past) who would it be?

Randy Rigby saying fun stuff in his interview this week with the Zone.  All quotes courtesy of Moni at Jazzfanatical.

So where are you in that process right now? Have you begun interview candidates?There’s, there, we’re in that process, yes. It’s, I’ll just say that we’re in the process of doing the necessary discussions with all that need to be discussed, from potential candidates to agents to receiving approvals. We’re well in our way in having discussions with all those various types of needed people.

What kind of response have you gotten from candidates on first contact?You know what, when you talk to various, from candidates, and I’m not talking about just right now. I’m talking about over the last couple of years as well, as you’re talk to agents, as you talk to players, as you talk to potential coaches, potential people who want to be general managers, the first thing that I get out of, as people have done their homework and their due diligence about the Utah Jazz, there’s a feeling. There’s a respect.

And you know what? It’s been really, I’ve been proud that, to see that kind of respect that the, these people have for who we are and what we’re about.

Deron Williams has been struggling. The Nets haven't really seen this Deron much and not at all this past playoffs.

Howard Beck wrote an article on Deron and the possibility of the Nets might needing to trade him this offseason for the betterment of the team.

No one player can be blamed for the lousy late-game execution, but it is the job of the point guard (and franchise player) to maintain order and to put his teammates in the best position to succeed. Time and again, Williams has shown he is incapable of leading when the pressure is at its highest. When the Nets needed salvation this season, they turned to Johnson and Pierce.

This is surely not what general manager Billy King envisioned three years ago, when he plucked Williams from Utah and made him the franchise centerpiece. That Williams was then considered the equal (or at least close rival) of Chris Paul is of little comfort now, with Williams perpetually battling ankle injuries and crises of confidence.

What's going on with Deron? Yes he might need surgery, but where is his confidence? I remember Craig Bolerjack saying when the Jazz traded Deron that because of Deron's personality he could see Deron playing for several teams over the course of his career. It seems like that may be the case...

I LOVED LOVED LOVED DWill when he was with the Jazz. I didn't like mopey Deron but I loved cocky Deron. I didn't like him after we learned what happened between him and Sloan but I will always appreciate the time that he was with the Jazz and the excitement and star power he brought to the team. I will always appreciate the playoff runs we had with Deron.  We need that cocky star power player to take us to the next level. We need that player that can take over a game. (We need a coach who can execute a game plan first lol)  I am however, so glad that the Jazz didn't pay Deron 100 million dollars.

The Eastern Conference Finals are set. The Miami Heat  will face the Indiana Pacers. Here is the schedule: 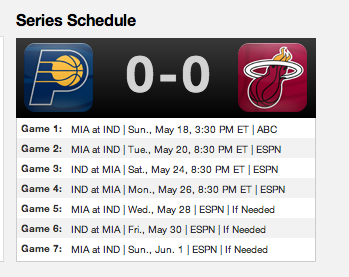 .@KingJames Good luck against the Pacers! Also, good luck playing for the Utah Jazz for the next 14 years. Love you. Ok, thanks, see ya.

Who do you think will win this series and in how many games? Are you excited?