Internet was out last night, so I am doing this now

Okay, so the first day of the NBA Draft combine always feels like the first day of school. Your parents drop you off super early, and it's awkward until you start to see your friends and then things go okay. That's what happened on Day 1. I left my downtown condo at 6:45 and still got there before 7:00 am. (There being the Quest Multisport facility, formerly Attack Athletics) The reason why it is so important to get there early is to get parking within their walled and security gated facility. I was the third car in, ESPN Michael Wilbon parked next to me later on in the day when he showed up around 9. The second reason why it's so important to get there early is to get GOOD parking in the VIP area before they put up the VIP ONLY signs. Again, there's no reason why I should be parking in the same section as ESPN on screen talent.

Anyway, it was a cold and grey Chicago and the doors were locked, so I took a few pictures: 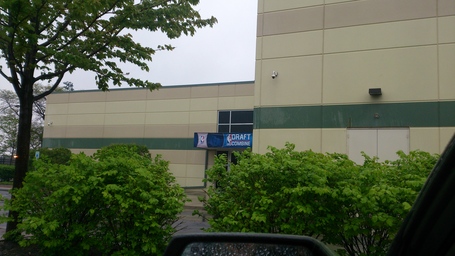 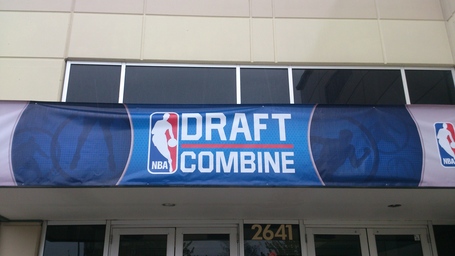 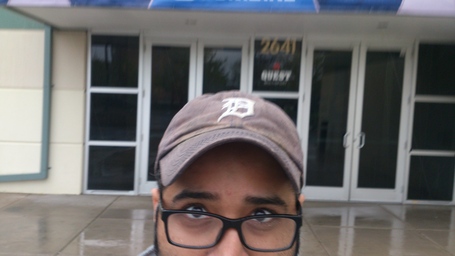 I don't know how to take a selfie (and yes, I have a pimple near my eyebrow which is the first pimple I've had since I was 17). But the whole show wasn't just the exterior or the locked doors. When the NBA head office PR people finally showed up I got inside -- it was like being home again:

Anyway. This event isn't about the facility, or meeting up with familiar faces. It's about the players . . . well . . . if you are a good player it's about you. For us Utah Jazz fans it was about creeping on the Utah Jazz brass.

These were the first two people to show up: 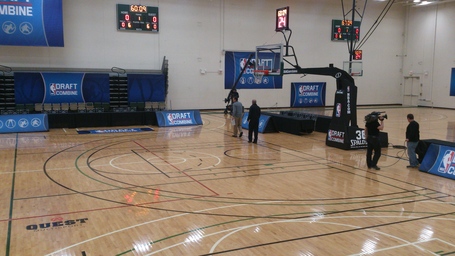 Dennis and Kevin, who came in the same car together apparently.

Who was there (confirmed by visual observation and talking to people):

That doesn't include the other scouts who were on the 'scouts only' side of the floor. It was confirmed to me that none of the international scouts where there -- so I'm expecting that Bobby Castagna, Dave Hobbs, Ryan Lindsey, and Dereck Whittenburg where there (the Utah Jazz NCAA scouts). So that's 12 people with the Official Jazz party, and 2 more who were with the team in some capacity. Scott Layden isn't with the Jazz anymore, but he spends a lot more time during breaks with Sloan and company than he does with the Spurs group.

And that's the other thing, there are so many groups all around, at one point I was standing in-between Danny Ainge and Mitch Kupchak. I could almost FEEL DA RINGZ!

There were fewer former players this time around (got a fist bump from Scottie Pippen, now I want to burn my hand), but if you waited long enough like a wildlife photographer you eventually got an okay shot. 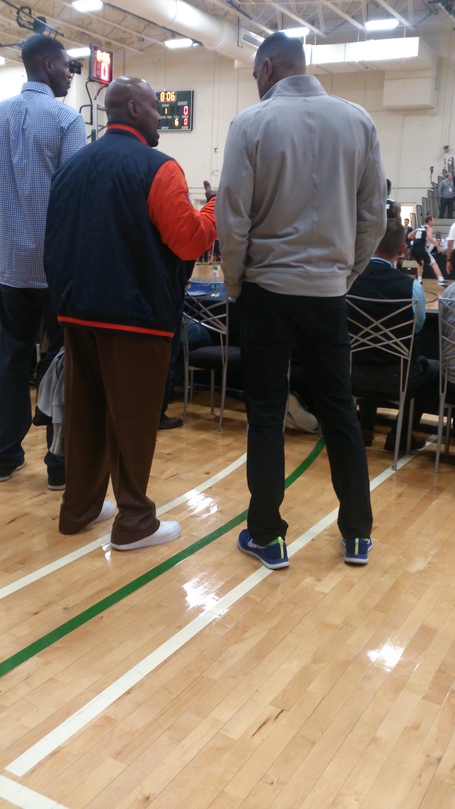 Tim Hardaway and Allan Houston. No doubt both not talking about any desire to coach the New York Knicks

Well, day one was pathetic in terms of the actual play. Guys were not hustling across the board, including the staff -- Brad Jones turned the ball over in a drill. Instead of five workout sessions there were only four, as they lumped all the PFs and Cs together. They also switched around players one night after sending an updated list of players. Zach LaVine is a PG, was listed in the SG group two nights ago, and then the next morning was put in the PG group again. This is frustrating only for the people who actually read every e-mail the NBA sends them.

Wait, this was the good workout group? How sad.

Over all Day 1 was a downer like the weather. 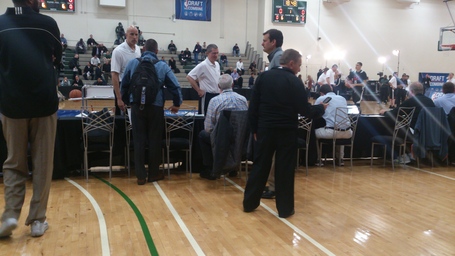 For me the big benefit was talking with Jazz people on and off the record, and networking with other writers trying to share rumors. I did meet Aaron Falk and Bill Oram. One of them was really cool and fun, the other was too cool for school. I did spend more time with the national guys, and the other people who are lowly "bloggers", like the SB Nation people, and people from other groups like HP etc.

As for the players, I am going to try to get a better read on guys like Zach Lavine (whom I was predisposed to be a hater of), Joe Harris, Gary Harris, and Isaiah Austin.