Talking about the NBA Draft Lottery and the Detroit Pistons

The Detroit Pistons finished the season 29-53, the eighth worst record in the league. As a direct result, they have the eighth most ping-pong balls for today's NBA Draft lottery. In order to get a little more information on the Pistons we're going to Jam with DetroitBadBoys.com editor Sean Corp (@sean_corp)!

Sean: Josh Smith, Brandon Jennings and Maurice Cheeks. Nothing you can do about that.

Sean: Andrew Wiggins. In fact, he's such a perfect fit on both a talent level and what the Pistons need -- perimeter shooter/scorer who can also defend -- that I will be crushed if/when the Pistons don't win the lottery.

3. Historically the lotto has been _____ to my franchise.

Sean: An unhealthy relationship? They treat me wrong until they do something to make me remember why I loved them in the first place. Until lately, the Pistons haven't been a perennial lottery team. They have only received a top-3 pick once since taking Isiah Thomas in 1981 and that was a gift from the Memphis Grizzlies thanks to an Otis Thorpe(!) trade from a million years ago. That is when Detroit famously got the No. 2 pick in the LeBron-Carmelo-Wade-Bosh draft ... and selected Darko Milicic. The Pistons have then have gone from drafting stupendous building blocks in mid-lottery (Greg Monroe! Andre Drummond!) to wasting picks on the likes of Brandon Knight and Austin Daye when they could have selected Kawhi Leonard and Ty Lawson, respectively.

Sean: Simply, like I said, the Pistons haven't had one of their own picks show up in the lottery since 1981. I think they're due. But, really, a picture is worth a thousand words, right? Here you go: 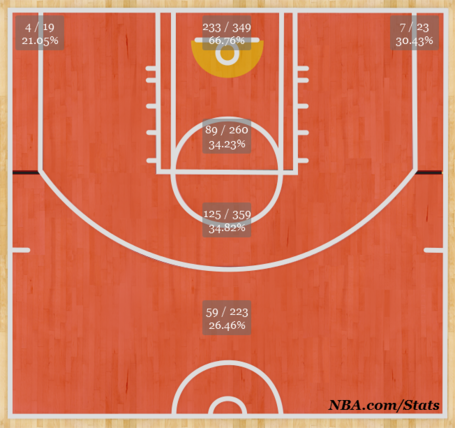 Sean: Because this team isn't Cleveland. It's not going to use the No. 1 pick on the likes of Anthony Bennett. And what I mean by that is that if the NBA gods decide that this franchise, which has been perhaps the NBA's most pathetic for the past five years, decides that the Pistons should get the No. 1 pick they will not waste it. They will be eternally grateful, be happy that Joe Dumars and Maurice Cheeks has been replaced by Stan Van Gundy and Stan Van Gundy and take Andrew Wiggins. And that's the last you'll see of the Pistons in the lottery for quite a while. A bad team becomes good, the NBA gets just a little bit better and it makes room for another sad-sack franchise to turn its luck around.

Thanks Sean, and best of luck to your Detroit Pistons!