WE'RE GOING TO WIN, GUYS. MAYBE. MOST LIKELY NO. BUT THERE'S A CHANCE!

Today is the day that we have tanking waiting for.  The lotto to end all lottos.  Whoever wins this lottery is in the driver's seat of the deepest draft since the 2003 draft.  This is the grand daddy of drafts.  In the opinion of this writer, even if Dennis Lindsey's gamble to go all in on this lottery fails he will have made the right call to go for it.  To improve a small market team in a dramatic fashion there's usually only one avenue to do it: the draft.  I will never be able to fault Dennis Lindsey for daring to dream big and coming up short because of a randomized drawing.

Dennis Lindsey with the moves he made last offseason (and those he didn't make) put the Utah Jazz in a good position to draft an elite prospect and possibly a once in a generation player.  What more can you ask from your General Manager? The Utah Jazz will go into the draft with one lottery pick, a late 1st rounder, a valuable early 2nd rounder, a host of young prospects of cap friendly contracts, and a hoard of cap space.  The Utah Jazz can do some damage in the draft this year and if the Jazz get lucky today that ammunition becomes a lot more Jazz-friendly.

Amar this morning put together a depressing, sad, I'M GOING TO SLIT MY WRISTS I MEAN IT!!!!! fascinating piece about the Jazz's lotto odds.

As you can see, well, the one time the team REALLY had a good shot at a great pick the team dropped to 6th. The Jazz had to trade back UP to the #3 spot to get D-Will. That was a trade that happened before the NBA Draft started so technically he's our pick through and through.

Guys the lottery is fixed.  Dan Feldman of ProBasketballTalk proved it.

Isn't it always convenient how the most-obvious team wins the lottery? That happening proves it's fixed. If it were truly random, a team other than the one you know the league wants to win would at least sometimes get the No. 1 pick. But that literally never happens.

See?  And who is the lottery fixed for?

Though Andrew Wiggins is still the likely No. 1 pick, don't rule out Jabari Parker. He's more polished, and that could give him the edge in many statistical models teams use. So, the NBA will give the Jazz the top pick to ensure they get Parker. A Mormon star in Utah would have HUGE marketing potential. Parker could be bigger than Malone.

It's in the stars, everybody.  Don't even bother watching this.  We got this in the bag.  *Takes out a twenty from wallet* Here, Adam Silver, this is for you.  You earned it.  Getting rid of the biggest racist in the NBA AND letting the Utah Jazz win the lottery all in the same season?  You shouldn't have.  *Puts twenty in front pocket of Adam Silver's suit coat and pats it* Don't spend it all in one place.

The Dr. Buss bobblehead is headed out to NY with Big Game @James_Worthy42 for tomorrow's @NBADraft Lottery. pic.twitter.com/u6xo1crzzJ

I mean, seriously, how the hell are we supposed to compete with that?  QUICK, WHERE'S MY BOBBLEHEAD OF LARRY MILLER?  There is none?  Crap ... well ... Frank Layden, work your magic. 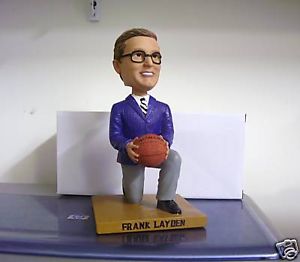 At least we only have to go against Dr. Buss mojo.

Dr. J will represent the Sixers at the lottery http://t.co/b6SWVEWZI4