The Downbeat #1364: The Something In Sports Edition

Share All sharing options for: The Downbeat #1364: The Something In Sports Edition

The Great Coaching Search continues apace. And that pace is glacial. While we've heard about plenty of rumored names and a couple of concrete interviews, from the fan's point of view, the Jazz are no closer to hiring a coach today than they were the day Tyrone Corbin received his walking papers.

For that matter, some of the names that have been discussed, both in and outside of Utah, don't even have coaching experience. Brad Rock of the DN examines the matter in a most Costanzian way:

There's a scene in "Seinfeld" where George Costanza has quit his job.

"So what are you going to do?" Jerry says.

"I like sports," says George. "I could do something in sports."

George: "You know, like the general manager of a baseball team, or something."

Costanza also proposes being an announcer, to which Jerry replies, "Well, they tend to give those jobs to ex-ballplayers and people that are, you know, in broadcasting."

Nowadays you'd have a shot.

I bring this up because this year, in particular, there are people being hired or considered as NBA coaches who, like Costanza, are a little short on resume power. Welcome to the exciting new world of job hunting. No boots on the ground experience? Don't worry. You have the same amount of coaching experience as Steve Kerr, the new boss of the Golden State Warriors. John Stockton keeps being tied to the Jazz's coaching vacancy, even though he has never coached beyond his kids' youth teams.

(The scene in question, for those lacking in Seinfeld lore, follows below.)

Of course, experience isn't necessarily a guarantee of future coaching success. But the Jazz did devote the last three years to Corbin, who had no head coaching experience himself. So I wouldn't blame them for wanting something with a few miles on it this time around. But as Brad points out, those names are rare this offseason.

We've been down this speculative road before since the season ended, and there's not much further we can travel until the Jazz actually give some sign of what they're looking for. Basically, at this point, it's a coaching search about nothing.

On the other hand, you could just have a coach who SAYS nothing.

You know what, forget coaches. Let's just move on to your FanPosts.

First, Jordan Cummings examines some lesser-known draft prospects that might be in range for our late first or second round picks:

I'm still recovering from the gut-punch of watching Cleveland nab the #1 pick, against all odds, for the 3rd time in 4 seasons (along with two #4 picks during that time).

Given that 1) Jazz news is basically at a stand-still right now, 2) the draft is still about a month away, and 3) I don't have cable so I can't watch the playoffs, I find myself insanely bored. What to do with all this free time? Homework, you say? NO WAY! It's time to take a look at some players I'm irrationally excited about and have (most likely) unrealistic expectations for.

Sticking with the draft theme, pacoelcid has per-game PER calculations for six prominent draft prospects (some of whom would seem to be out of range for the Jazz now, barring a trade, but the comparisons are still instructive):

As much of this off-season has been focused on the draft for us Jazz fans, I decided to take my own look at the draft class and calculated the estimated PERs for the top 30 draft selections from Draft Express.

While I'm not going to present all that estimated PER information here, I am going to show the PER charts I generated for Wiggins, Embiid, Parker, Smart, Gordon, and McDermott (yes, I included McBuckets - you'll see why). No, I don't have anything for Exum as he didn't play college ball; sorry folks.

Lastly, after last year's Season of Discovery, hamfist has a new name for the upcoming season: The Season of Patience:

I am going to trust in the process, and if that is sitting at 5 and drafting the BPA, so be it. DL's best day in his entire GM tenure was last year's draft. He is going to do his homework. He is going to make deals that make sense. If one of those deals is to move up, awesome. If it is to move back to get more value and the guy he actually wants, awesome. And if it is to pick players at 5, 23, 35 and stand pat with the roster we have, awesome. He has a plan and has promised to not skip steps. I am going to be patient and let that plan fully materialize. Assuming that the right move is to trade Favors, Burks, the 5th pick, and next year's unprotected pick for Cleveland's pick is a knee jerk reaction to the disappointment of moving back in the lottery. I would rather .assume that DL knows where the real value of those assets are and that he will make the right moves. Starting now, this is going to be the season of patience.

Great stuff for a slow week of news, guys. You are all neat.

The Jazz may be taking their sweet, ever-loving time on the coaching front, but they're doing other good works in the Utah community in the meantime:

The Utah Jazz, Larry H. Miller Charities and the City of West Jordan will open two new basketball courts at the Ron Wood Park (5900 W. New Bingham Highway) on Friday, May 30 at 2:30 p.m. With participation by Utah Jazz President Randy Rigby and West Jordan Mayor Kim V. Rolfe, the public ribbon cutting ceremony will take place in conjunction with the opening of the Sierra Newbold Playground.

I love that basketball is so popular in Utah. Obviously, the Jazz play a big part in that, and they have a vested interest in stoking and maintaining that popularity. But the sport was my first love, a passionate affair borne from grade-school recess and hours in the driveway and church groups and cold winters and Stockton and Malone. And even with the fluctuations in the Jazz's fortunes (and my sedentary, non-athletic lifestyle), I still adore it.

I know that football rules the roost nationally, and I have a strong affinity for soccer these days, but I think everyone should learn to play basketball. I'm glad the Jazz are helping in that regard.

Here's a little game I saw on the internet today. (I can't remember who I first saw it from, so if it was you, let me know and I'll credit you. I'm nicking it from this message board at the moment.) 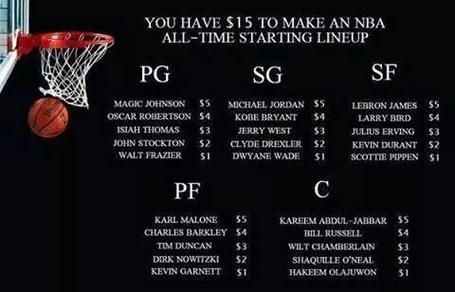 Let's have your teams in the comments. My (admittedly biased) team: