The Downbeat #1366: The Anonymous GM Edition

Share All sharing options for: The Downbeat #1366: The Anonymous GM Edition

Anyways going back to Ostertag's interview. Moni has our transcript. I listened to most of to it live, it was fun to hear Ostertag's voice.

I loved hearing about his relationship with Sloan. I think hearing it and knowing how their relationship is now just shows what great men they are. Here is what Tag had to say about Sloan:

What kind of impact did Jerry have on you?When I was playing for him, I hated him. (laughs) …

He’s had a big impact on, especially my career after, or my life after basketball, ’cause you know, I look back a lot on the way my career went and the run-ins him and I had, and now, e–you know, everybody used to say, you know, if he didn’t care he wouldn’t yell at you. I thought he cared way too much sometimes.

But you know, looking back on it, he was really, he really was doing it in my best interests. And I fought it and fought it, and you know, now I see what was going on. And I’ve tried to use that, things he would tell me in basketball, in my everyday life. And you know, I think I’m a better person for it. I see how I more was wrong in my younger days, and he was right.

Its no secret that Ostertag and Sloan had their issues during Ostertag's playing days. Many players I imagine would never build the friendship that Sloan and Ostertag have now if they hated their coach during their career. Sloan and Greg are different that way. They are great men in that they can get past their professional relationship and hardships and become friends.

I remember shortly after Jerry left the Jazz. I was driving home from my job at the Daily Herald. I was listening to a national late night sports talk show. The guest was Ostertag. It was the kind of interview where I had to stay in my car until it finished although I arrived home. it was that good. Ostertag was fiercely loyal to Sloan in the interview. Ostertag also shared that Jerry called him the day after Jerry quit. Jerry and Ostertag also go hunting together.

I find it fascinating. Other players in the past have had these close friendships also.  A most recent example from just this past Sunday:

We need our players to have this again. With the Jazz it makes all the difference on the court.

More from the Ostertag interview:

I think when you get teams that buy into what a coach is trying to do, and not fight the coach–I don't care if it’s up and down as fast as you can go or coming down and running the set offense and making a team play defense for 22 seconds to get the shot you want–it works.

On that front no new Jazz coaching news for over a week.

Chad Ford answered a few questions about the Jazz in his chat yesterday: 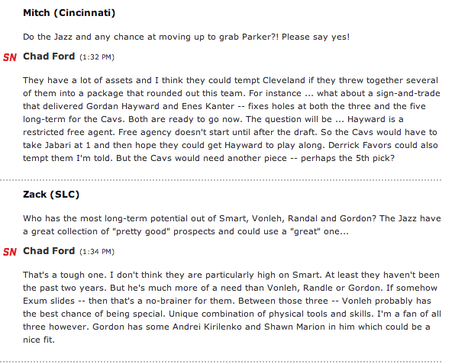 Then Chad Ford tweeted some things that got some Jazz fans excited but made Peter tweet some funny funny tweets.

Noah Vonleh drawing serious praise from NBA execs after a workout in NY on Wed.

Said another "Vonleh's got elite physical tools and is very skilled. He should be in the same group with Wiggins, Embiid, Parker & Exum"

"Vonleh was good. Didn't shoot it well but everything else was very good to ridiculously good" according to 1 NBA exec.

Anonymous GM to media member "Marcus Smart has so much LeBron James in his game, he should be the first overall pick hands down."

Anonymous GM to media member "When I watch Julius Randle play I cannot help but to think of a younger and much better Shaquille O'Neal."

Anonymous GM to media member "Remember that dude Drazen Petrovic? Well Bogdan Bogdanovic is his clone but without the poor driving skills."

Randy Rigby always a treat on the Zone. Love his interviews. Moni has the transcript.  So much gold in it, so go read it.

The Jazz are holding an "open" scrimmage on July 10We’re going to have this year, on July 10, particularly for our good sponsors, also our season ticket holders–another plug, by the way, of why you should be a season ticket holder–we’re gonna have for them, to be able to come out and see this young team in an open scrimmage practice, that is going to be hopefully a prequel to, then, the Rocky Mountain Revue next year.

But we’re gonna have them on July 10. We’re gonna do this scrimmage, that we will then have a great festival and some fun…We want our community* here to have the first taste and the first touches with this exciting young team.

"We want our community here to have the first taste of this exciting young team...but only if you've already given us more than $500."

The scrimmage is my favorite event of the year. For some fams without disposable income it's the closest they get to players @GregInUtah

I'd think a team putting fans through a painful rebuild would do stuff to win over all supporters, not just season-ticket holders/sponsors.

I understand season ticket holder events and all, but shutting out all fans for some events are a bad idea

@UofUJazz @dianaallen @HilerieH this is something new, so I’m fine with it being private. If it was the big scrimmage I would flip a lid

How do you feel?

This lead to a discussion about how the Jazz do in the PR department and events in general:

@dianaallen agreed. And I had all sorts of ideas of what they could do and was going to email them to @billylea and then life got supercrazy

What are your suggestions to improve the Jazz fan experience? In no way am I bashing the Jazz. I have had amazing times at chalk talks, when my daughter was a courtside kid, and of course when I was Greg Miller's guest.  I just thought it would be fun to brainstorm all together.