Why the Jazz Could Proceed with Embiid

Why the Jazz should consider drafting Joel Embiid, if he falls to number 5.

Share All sharing options for: Why the Jazz Could Proceed with Embiid

None of us are really in a good position to comment knowledgeably about Joel Embiid's situation.  Even if any of us have extensive medical knowledge, it's safe to say none of us have seen Embiid's medical reports or know enough about his situation.

Instead, I would like to just generally talk about the risks the Jazz could and should be willing to take to maximize this draft, in regards to Embiid.

By now, hopefully you have checked out Kevin Pelton's investigative look at the historical precedent to this injury:

My research turned up four big men who have suffered navicular injuries in addition to Walton and Yao: Curtis Borchardt, Brendan Haywood, Zydrunas Ilgauskas andKevin McHale. There have also been a handful of perimeter players with navicular fractures, includingMichael Jordan, during his second season, andPhiladelphia 76ers guard Andrew Toney, who missed nearly the entire 1985-86 campaign and was never the same again.

Despite Toney's example, navicular injuries have been more problematic for big men because of the additional weight and pressure they put on their feet. Discounting Hayward, who missed all of last season after undergoing surgery in October for a stress fracture of his navicular, the other five post players missed an average of 47.5 percent of their teams' scheduled games in seasons after the injury.

There are certainly some scary names in that list.  But there are also names that went on to have meaningful careers after their injury.  Here's Pelton with the bottom line:

When considering the impact of Embiid's navicular injury on his draft stock, the severity is hard to overstate. Not only could it potentially keep him off the floor all of next season, the chance of recurrence will always linger. There's a hope that, like Ilgauskas, he could eventually enjoy a long and productive career. But teams picking at the top of the draft must also be prepared for the possibility that Embiid misses multiple seasons or even has his career cut short.

For the sake of arguing and for not having any clue what will happen in the future, let's pretend that the Jazz are faced with two scenarios for Joel Embiid that each have a 50/50 chance of occurring:  1. This injury will be devastating to his career and he will be hobbled for the duration of his 6 year career. 2. He sits out a year and comes back to have the career we expected him to have before all this foot stuff came out.

There will be some who will say that the Jazz have to get this pick right.  I agree with that.  Opportunities to draft like this don't come very often.  With that statement there is some inherent realization that the Jazz just can't bust here.  They can not draft a guy that plays out Embiid's first and worst case scenario.  But I would also argue that the Jazz cannot afford to come away from this draft with a player who is only good.  The Jazz cannot afford to come away with a Tyreke Evans, or a Chris Kaman, or a JJ Redick.  They need to do what they can to come away with a franchise game changer.

Losing the Lottery Put the Jazz in a Tougher Position

There has been some debate about how bad it is for the Jazz to have the fifth pick in the draft.  I have a whole post devoted to this that I will publish Monday, but the real problem for the Jazz coming away with the 5th pick, as opposed to a top 3 pick, is that it limits their options.  It make the decision making process easier, theoretically, but it also inherently limits their ability to draft a game changer.

There is not a player available at 5 that is without significant risk.  Some of those players are almost certainly going to be good like the players I mentioned before, but there is serious question that they will be able to really change the direction of the Jazz franchise.  Even Jabari Parker and Andrew Wiggins, while carrying less risk than Vonleh, Smart, etc, are not guarantees to come in and light the NBA on fire ever.  Lebron had almost no risk.  Anthony Davis was a low risk prospect.  Joel Embiid, if healthy, is a low risk, can't miss prospect.  And if there is any decent chance that Embiid can have a healthy, fulfilled career, and the Jazz know this, they have to consider him, and maybe even draft him, if he's available at 5 on Thursday night. 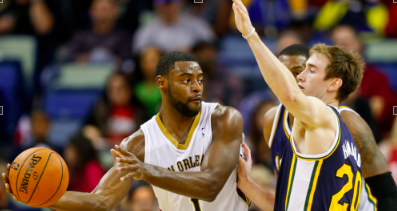 Tyreke Evans is a nice player, but the Jazz need to get a better player than he is in the 2014 draft.

If the Jazz did draft Embiid at 5, he would need some time to heal and get better at the game of basketball.  This is true for all of the 18 and 19 year olds in this draft, but especially Embiid.  If healthy, he could be a defensive force immediately and do enough to stay on the court offensively, especially if the Jazz are committed to development and developmental plans, like they appear to be.  But let's also assume that Embiid would have to sit out the 2014-15 season in its entirety.

This would put the Jazz in the same position as last year.  Not a very good one.  But it would also allow the Jazz to really take a look at a big man rotation of Derrick Favors, Enes Kanter, and Rudy Gobert and see what a new coaching staff could get out of them.

Could the Jazz fan base put up with another season similar to last year, even if it meant that Embiid could be a franchise player in 4-5 years?  The answer is easy when asked, but in truth the fan base may not support such a thing with their attention and pocketbooks.

Who's Up For a Compromise?

So let's say the Jazz take a real swing for the fences and draft Embiid after he falls to them at 5 and he sits out the next season in order to get healthy.  The Jazz could still improve upon their position from last year and become more competitive.  This would require either a trade of one of the young guys, or the 23rd pick.  What could the 23rd pick or Enes Kanter or Alec Burks garner?  Could a combination of those pieces land them Ryan Anderson?  Thaddeus Young?  Could the 23rd pick land the Jazz Brandan Wright, a player who could play at a very high level for 15-20 minutes every night?

Or perhaps, the Jazz could hedge their bets in free agency by spending some money on immediate help.  Ed Davis could help the team up front for a year or two at a reasonable cost.  Spencer Hawes would allow the Jazz to see what the team would look like with a true stretch big man.  The Jazz could bring Marvin Williams back in a much smaller role, where he could fair better.

My Job is Not on the Line

In short the Jazz can't be the team that gets too scared to take a calculated risk.  If there is any way that they can draft the best player from this draft, even with the injury scares, they have to consider it.  They have to think about taking that risk.  We need a game changer in this draft.  We can't draft a bust, but we also can't add just another so so player in the draft either. Neither will get the Jazz to where they need to be.  It's not my job or money on the line, so it's easy for me to say, but I think the Jazz should strongly consider taking Joel Embiid if he is available with the 5th pick.  And as Jazz fans, we would need to realize and appreciate the necks that the Jazz front office would be sticking out in order to do so.