Since he was the #1 pick, we'll start with Andrew Wiggins. There was a lot of raving about his kit on draft night. I was less impressed. The fit of the jacket was very good, and the pattern was cool, but to me it would have worked out better if it had been a different color and didn't have the elements of a tuxedo (shawl lapel, one button) 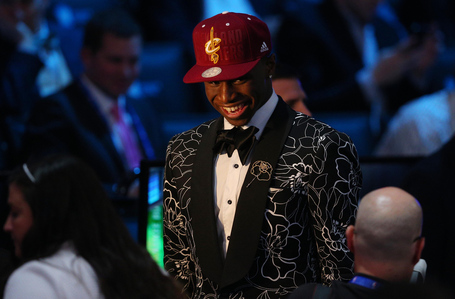 But the one thing I couldn't get past is that FLOPPY BOW TIE. I'm sure it came undone over the course of the night, but a better made bow wouldn't have.

If this were a red carpet event, like an awards show, the tux would have been fantastic, but this was the equivalent of wearing a tuxedo to a business meeting where all your peers are in suits.

Why not keep it going with the draft order? Jabari Parker looked great. His suit accomplished what a suit should do: be appropriate for the occasion and portray your personality. Whereas Wiggins was pushing it, Parker was classic and conservative. The cloth was a great shade of grey, the black grenadine tie and peak lapels made the suit more formal, and the simple white linen pocket square fit the entire look. 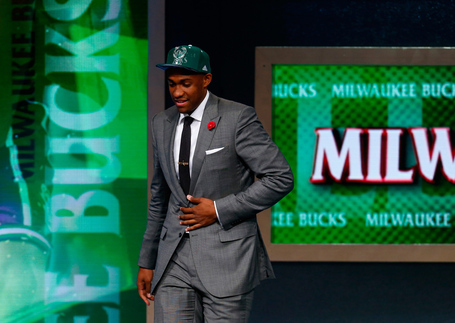 The shoulders were a bit off on the suit, as you can tell by the divots at the top, but nothing too egregious, fit-wise. For some reason the people putting these kids in suits can never get the shoulder width right.

Two of my  favorite dressers of the night:

He was one of the few that went for the 6x2 double breasted, and it was fantastic. Simple navy suit, solid light blue shirt, and a great houndstooth tie. Payton also wins for best hair. 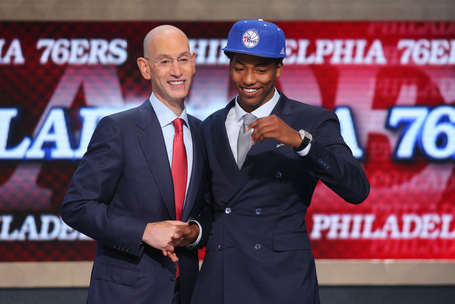 The only sport coat combo of the night (that I saw). It was a bit loud, but the color combo was bold, and cool. The only knocks are the largest bow tie known to man, he needed to get that pocket kraken under control, and the fit was off in the shoulders (that one isn't on him). Oh, and cinch the belt up on notch. 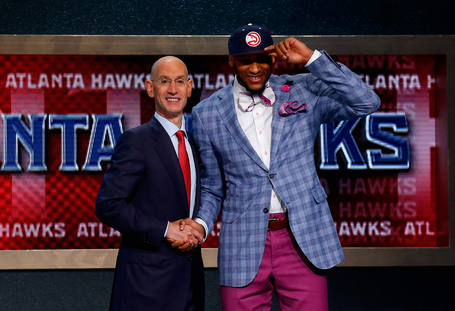 The next two spots are for our draftees. First, Dante Exum:

He went with a light grey three piece that actually had one of the best fits of the night. The pairing with the graph check shirt and the polka-dot tie was nice, and it worked well with the solid suit. A+ for not throwing another pattern into the mix, and opting for the simple white pocket square. 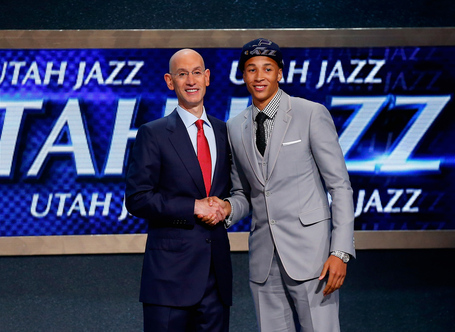 Someone just needs to explain that you never button the bottom button.

I thought that Rodney had a fantastic suit. I tend to err toward the more simple, elegant look, and Rodney  did that well. He had just enough to stand out with the red tie and the "blogger blue" suit. The simple white/ navy pinstriped suit was a good part from the plain white shirt, and the fit was pretty spot-on (minus the... you guessed it, shoulder width).

The only knock is the infamous watch, that was so gigantic that he couldn't get his shirt cuff over it.