Not everyone plays in the NBA, but everyone who gets to this level knows their way around the court

The Utah Jazz announced their new head coach will be Quin Snyder. While Peter told me* he was going to be the head coach weeks ago I didn't bother to really do anything but the most cursory research. I guess I should have been more prepared for this moment. Anyway, Snyder didn't play in the NBA -- but he is a better player than any of us. He was player of the year twice back in high school, for his state (Washington). The McDonald's All-American played at Duke for four years -- going to the Final Four in three of those years ('86. '88. '89). But you already know all of this by now.

Tell me something I don't know?

Well, you may not know his stats from college? So here they are. 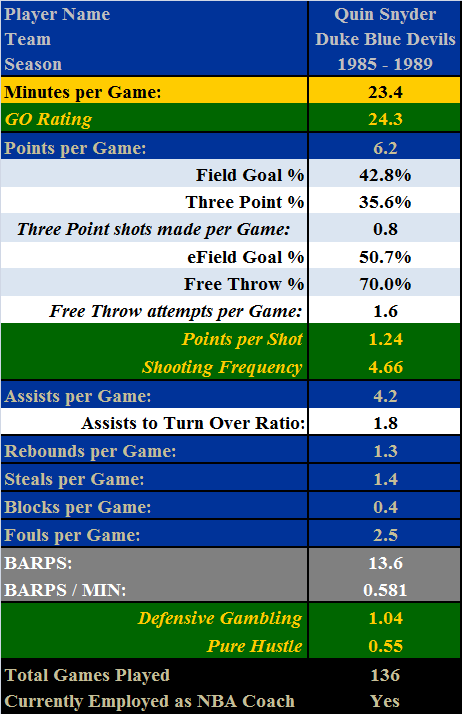 He was a usual starter from his second season onwards, and I found it interesting that he was a point guard who got about half a block per game over his career. Obviously he took the back seat on offense, but Duke point guards are known for being really, really, smart. I would argue that point guards have the highest basketball I.Q. on the court. Furthermore,  as a point of comparison, he seems to really know the game well enough to the point that he can communicate ideas about the game a little bit better than some of the other people who have done so in front of Jazz media over the last few seasons.

He was pretty streaky as a shooter and did not have the concentration needed to be a consistently great free throw shooter -- which is kind of needed to be a top tier point guard. In his senior year he kind of tanked his way out of NBA Draft contention with his poor shooting (41.4% on the floor, 28.6% from deep, 54.0% from the stripe). It's almost upsetting when you compare that to his performance as a junior, where he shot .480 / .446 / .782, and was doing a lot more of everything in fewer minutes on the floor. The saving grace, I guess, is that he averaged 2.0 steals a game in his last season.

Not every point guard does that.

I can only imagine how his personal experiences as a basketball player have shaped his coaching style, playbook, and schemes. We presume that his idea of offense isn't just to post up a guy on the left block and limit player movement. So far Coach Snyder is winning over fans with his suggestions that he wants to play defense and get easy baskets. It's almost like he read all of our pleas about counter attacking in transition.

But that's information for another day and another post.

What's the biggest career playing achievement for Snyder? Team success is nice, but I think it's the fact that he was rated the #16th most hated Duke player of All-Time by Complex Sports. Regardless of what he was known for as a player, I know that he will make plenty of people happy that he's our head coach.