NBA History: What does it take to become the head coach of the Utah Jazz?

There are many paths up the mountain, which path did Coach Snyder take? Is he following anyone, or blazing his own trail?

Share All sharing options for: NBA History: What does it take to become the head coach of the Utah Jazz?

We need to look deeper into what is a Utah Jazz Head coach, what we expect, and honestly, how do you even get this job in the first place? According to Jody G, of the Deseret News, the Jazz front office narrowed down the head coaching search to Adrian Griffin, Quin Snyder, Alvin Gentry, and Brad Jones. These four were picked out over every other single unemployed basketball coach on the planet. One other coaching candidate is still coaching, that is San Antonio Spurs assistant Jim Boylen. Maybe he was on their short list, but the Jazz wanted to move forward and picked Snyder? I don't know.

I do know that these five coaches were the main names bandied around the most in the papers, radio waves, internet, on the TV, and in BestBuy parking lots. No reported interviews for George Karl, Avery Johnson, Steve Kerr, Jeff Van Gundy, Stan Van Gundy, Mark Jackson, John Stockton, Lionel Hollins, Sidney Lowe, David Blatt, Ettore Messina, Vinny Del Negro, Derek Fisher, Sam Mitchell, Al Pacino's character from "Any Given Sunday," or Kevin Ollie. Maybe there was not mutual interest in the job after the team failed to win the lotto, but I know a lot of Jazz fans sure threw a lot of names out there. I do get it though, when you are desperate you sometimes hope for the impossible -- like a Frank Vogel or Scott Brooks getting canned if their team had early playoff exits.

So, what made Snyder the best out of the bunch? What qualities does he share with the previous history of Utah Jazz coaches? Let's take a look. 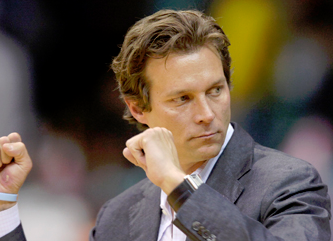 As mentioned before on this site, Coach Snyder is the eighth head coach of the New Orleans / Utah Jazz franchise. No, not the eighth coach since the 2000s or whatever. The eighth coach ever. (Fun trivia: The Los Angeles Lakers have had 9 different head coaches record a win for them since the 1999 season till today. The New York Knicks only 8!)

With all due respect to Scotty Robertson and Butch Van Breda Kolff, we're going to look at the last six coaches of the team and not the full eight. I'm speaking, of course, of Elgin Baylor, Tom Nissalke, Frank Layden, Jerry Sloan, Tyrone Corbin, and Quin Snyder. Some were lifers as coaches, others mainly players, and of course, there was a middle line there between the two.

Basketball Experience before being Hired by the Jazz as Head Coach:

Being a player, or coaching players

This does not include other basketball life jobs like being a GM (so Baylor and Layden get dinged a little), or being otherwise associated with the game (Nissalke's radio work is not listed here). Would it surprise you to know that Corbin has the most experience as a player, leading up to being the Jazz head coach? A huge part of that was his longevity, he played for 16 years, or four presidential terms. Snyder, who did not play in the league, did play the minimum to be a head coach. (Even guys like Stan Van Gundy played college ball.)

As for actually being in charge of a team as the head coach, Snyder, Nissakle, and Layden lead the charge. Nissalke actually coached on every level, from High School, NCAA, ABA, CBA, and NBA. Sloan's years with the Chicago Bulls are common knowledge, but few remember his one year coaching in the CBA. Both Layden and Snyder had a lot of head coaching experience at the NCAA level. This is where they appear most similar.  Baylor and Corbin represent the only two former players who had zero head coaching experience prior to getting the top coaching job with the Jazz.

What about earning your right to coach through succession? Here we have three guys who did just that, with Sloan, Corbin, and Snyder. Jerry and Ty did their waiting at the NBA level, while Snyder at the college and NBA ranks. There is a possible gap in the record here because we do not know how many years Nissalke or Layden were assistant coaches at the NCAA or lower level. Layden was an assistant at the NBA level only once, to Hubie Brown -- who luck would have it, was his NCAA team mate. So that team must have had the best BBALL IQ ever. I know that NIssalke worked his way up to being a coach, so that must involve being an assistant at some places. Still though, no one can say Ty didn't earn a right to be a head coach. He just may not have been the right head coach for the job he inherited. (For the record, I don't think Jerry Sloan would have been the right coach either, a man with his resume doesn't deserve to have to start John Lucas III)

As for "other" coaching experience, only Sloan, Corbin, and Snyder qualify. (Maybe there isn't enough info on the other three?) Sloan worked his way up to being an assistant through scouting and development jobs with the Bulls. Corbin worked his way into being an assistant by being a player development and player mentor coach at the NBA and NBA-DL levels. And Snyder did the same, just at the NCAA and NBA levels.

All in all you see a diversity of experience that leads to being the Utah Jazz head coach. Some guys came at it from a strong NBA portfolio, others a more diversified path led them to the NBA. Three coaches played in the NBA for 10 or more season, and the other three didn't play a single game in the NBA. Those non-playing guys spent more time actually coaching. Nissalke and Snyder both were Head Coaches for teams for a decade or more before getting the Jazz job, while two of the players had zero head coaching experience. So you see these groups forming.

What does it all add up to?

Boom. The last three Jazz head coaches had 30+ years of basketball before getting the job. Sloan and Corbin were heavy NBA guys, and Snyder our first highly NCAA focused coach since Frank Layden.

Life before, during, and after the Jazz

The complete game experience for these guys follow in the same lines of what got them there. Baylor stopped coaching to get back to being a General Manager -- which he was before he got into coaching the team 'in pinches'. Nissalke continued to coach on every level -- gaining some more head coaching and assistant coaching gigs after the Jazz. Dude even was an assistant coach for the original Charlotte Hornets, and somehow conned himself all the way up to being an executive of a Canadian basketball league. Layden worked mostly as a GM and exec after, but did come out of retirement one year with the New York Knicks to do some "other" coach type duties for his son Scott Layden.

When it is all said and done, three of these guys are out of coaching and have moved onto other roles around the game. Sloan is back into the game now and picked up another year of "Other coach" at the NBA level. Time will tell what will happen with Corbin, he has interest from the Houston Rockets, Golden State Warriors, and Sacramento Kings -- according to the rumors. And we don't know what Snyder's future with the team will be. He could be here for one year and get fired, or he could be here for a decade like Ty was. We just don't know. And we don't know what he'll be up to AFTER he's left the Jazz. Snyder (47) isn't that old or that young, but he's much older getting his first NBA head coaching gig than a bunch of Brad Stevens (37) types.

I would be surprised to see anyone coach for as long as Sloan did. But I would be even more surprised if guys like Corbin or Snyder aren't going to be involved with basketball for a very long time. Sloan was around basketball as a player or coach for over half a century. Corbin and Snyder have some work to do if they are going to catch up.

I will say that, first of all, I deserve an award for investigating Tom Nissalke to this degree without being a private eye. Second, these values approximate Nissalke's High school and NCAA coaching. There were few clear answers to how many years he coached at those levels, and how many were as the head coach. Most people from his era don't have very detailed records on this stuff, or how many years they were an assistant coach before getting hired. STILL, it's crazy what you can learn.

ADDITIONALLY, If you have been off the site for a while you probably missed all the other "Quin Snyder is the new Head Coach of the Utah Jazz" posts that have been happening. There have been a few.

That's what we have this weekend. There are sure to be more posts on the subject in the coming days, so you can catch it all at this handy link.