Wherein all things are Gordon Hayward (or Cousin Steve)

Share All sharing options for: Downbeat #1401: ALL THE GORDON HAYWARD HOT TAKES

Gordon Hayward Opinions. Every once in a while, the NBA media shines its bright lights on Salt Lake City. While most of the leagues followers were waiting anxiously for the #MeloDramaPartDeux and #InDecision and #BoshDoesSomethingAhhhIgotNothingHere to end, we were instead treated to the over-analyzed Gordon Hayward Contract re-signing...here is all (or most?) of the takes in one place:

Why the Jazz have to match Gordon Hayward's max contract

Gordon Hayward Will Likely Stay With The Utah Jazz, But Why?

Dunc'd On: The Utah Jazz's Plan

The Benefits of Being a Restricted Free Agent

Gordon Hayward agrees to terms with Charlotte, but Jazz set to match

So what Should Jazz do? Match. Next point.

Geeky CBA stuff. That said, I've been getting asked a bunch of questions, so let me try to summarize a few of them quickly. Andy Larsen has already touched on most of this.

1. Team's can re-sign their own Birds Rights (i.e. a player whose been with the same team for 3+ years) Free Agents for contracts in length up to 5 years. There is a very big distinction in the NBA Collective Bargaining Agreement for "contract extensions" and "new contracts".  What Derrick Favors did last October was extend his current contract. What Gordon Hayward could have done this summer is sign a new contract.  Ergo, the Jazz could have signed Gordon Hayward to a five year contract this summer, but could not have extended his contract for 5 years last October without maxing him out and making him the team's "designated player."

2. When a team signs another teams restricted free agent to an "Offer Sheet" the original team has a "right of first refusal."  What this means is that the Jazz MUST either accept the terms of the Offer Sheet or pass.  There is no talking to Hayward's agent now and getting him to change the terms by adding a year etc.

3. The Charlotte Hornets, and many teams attempting to steal restricted free agents are limited in what they can do to make a contract non-palatable for the original team.  The player option 4th year is one of the more frequently used devices and this is done by the new team in order to make the free agent available on the market as soon as possible.  This is really a benefit for Hayward though because he is guaranteed four years at HIS maximum salary but should he outperform he can leave in 3.

4. Which brings me to the other big problem with the Jazz not proactively signing Hayward on his own. As the current contract is structured, Hayward holds a trade veto this season.  Then in years 3 and 4 his deal is essentially expiring. What this means is that other than year 2, Gordon Hayward now has incredible leverage over the Jazz and if the team does not start winning then he could whine like Kevin Love and ask to be sent elsewhere. This is of course if he is playing well, if not then he'll whine like Eric Gordon and languish in obscurity while cashing huge checks over 4 full years.

5. Trade Kickers are not quite as common but have become more so in recent years. I'll link you to the CBAFAQ website if you are really curious. Just know that for the most part the kicker will not apply unless the cap takes significant jumps in years 1 and 2 (possible) and then thereafter the amount is lessened and it can always be waived if Gordon just wants to leave town.

6. Max money is used so loosely it seems to have lost all meaning. What it really means is that Gordon Hayward is going to get a contract that is the maximum sized that could be offered to him considering his years of experience (0-6 years) AND considering it is coming from another team (only 4.5% annual raises, not 7.5%) AND considering the number of years (4 years not 5) AND considering he has not met certain benchmarks like repeatedly being voted to the All-Star team or an All-NBA team.  For comparison sake, fellow 2010 draftee Paul George is going to make 5 years and $92MM and Carmelo Anthony is in line for 5 years and nearly $130MM if he re-signs in New York.  Before concluding that Hayward is NOT a max salary player, please consider that he'll be making in the ballpark or less than roughly 50 NBA players.  Is Hayward about the 50th best player in the league? Maybe, maybe not, but it is close.

Summer League. My downbeat is a tad short today since I'll be covering the Las Vegas Summer League later this week and next and will be writing much more on that. Use the comments section if you have any specific Summer League post requests.  Also we will be coordinating a Jazz tweetup at the game on Saturday night so post in the comments if you want me to add you to the email list I've put together for this purpose.

Cousin Steve. I've notice a lot of you are skeptical of my continued proclamations that new Jazz forward Steve Novak is my cousin.  To prove the naysayers wrong, I present you with unmodified pictorial evidence of our familial relationship...behold Exhibit A: 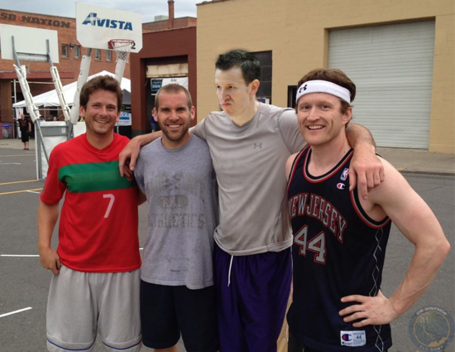