Today is the birthday of our lord and saviour newest Utah Jazz lottery pick, Dante Exum. He is 19 years old. For me, man, I can't even remember what being 19 was light . . . aside from waking up every morning and having nothing ache. He had his first birthday celebration live, on-air, with international NBA TV personalities (one American, two Canadians, and one Australian) late last night.

After practice today in Las Vegas he got some love from his team . . . where traditionally the rookies have to sing.

I think that's cool. These are memories he is never going to forget.

So what cool and/or crazy things to Aussie's do on their birthday, well . . according to different geocities style websites:

Australia - The Australian children have a special dish on their birthdays called "Fairy Bread". This is a is buttered bread covered with tiny, sprinkles known as "hundreds and thousands". In Australia too the handing over of the is symbolical of coming off age. This happens when someone turns twenty-one.

Many Australian Birthday parties are barbeques as the weather most of the time is not very cold or long in the winter.

I don't know if any of that stuff is true or not. We can't give Dante Exum the key to the EnergySolutions Arena just yet. As, well, Dante isn't old enough to rent a car yet. Furthermore, we don't want him to come and go as he pleases! He is our rookie and he's never going to LeBron us, right? Also we don't want him staying out too late, but here's some fairy bread: 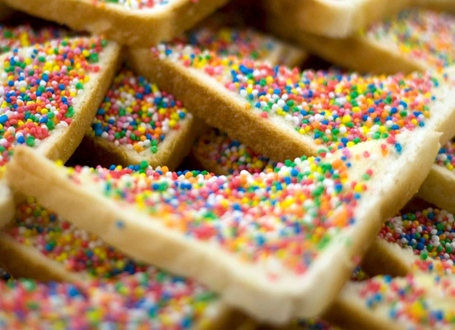 Yea. NINETEEN. (for me that age reminds me of the old school breaks song / downer "19" by Paul Hardcastle)

What would you give Dante for his birthday (what can you give to someone making millions)?

And what did YOU get for your 19th birthday?

I'll start. I'd get him a year's supply of Tim Tams. And what did I get? I remember I got a chance to eat lunch with my dad on that day. I was in university at the time, and it was rare that we spent time together. It ended up with him taking me off campus and somehow we were feeding some ducks / mallards doritos. It was winter in Canada. Few things made sense on that day. But it somehow made up for the chain smoking birthday clown with balloons my mom hired the year before.

I'm not really ready to investigate how messed up my life was, let's keep the focus on Dante!