While Exum had the crowd ooooing and awwwwwing, Rodney Hood and Rudy Gobert put on a show.

Share All sharing options for: Rodney Hood: Prince of Threes™ -- The Downbeat #1405

Did you know Dante is a Holy Roller? *Gets pulled to the side*  Excuse me, he was recognized by the High Rollers at Caesar's Palace.

LAS VEGAS (July 14, 2014)- As the NBA Summer League kicked-off this past weekend, the Strip saw an influx of fans, players and affiliates. Owner of the Dallas Mavericks and one of the stars of ABC's "Shark Tank," Mark Cuban was spotted on Saturday night at The Crowmell Las Vegas' elevated bar experience, Bound by Salvatore.

Also spotted at Bound by Salvatore on Sunday night was NBA All-Star and Hall of Famer, Gary Payton.

It was a big weekend for NBA rookie Dante Exum as he played in his first professional game with the Utah Jazz and celebrated his 19th birthday. The 2014 fifth overall draft pick celebrated in style at The High Roller observation wheel, as he and his family and friends took in the sights from 550-feet above the Las Vegas Strip.

(Thanks to Chelsea Ryder of Caesar's Entertainment for the information!)

So far, Dante Exum has talked about training with John Stockton and now he's being seen in the same places as Gary Payton.  This is exciting times in the Utah Jazz Kingdom.

In other news, a current Utah Jazz player is now considered a celebrity in Las Vegas.  Just take that all in.

TrueHoop TV did a segment with Rodney Hood and Dante Exum.  IS THIS WHAT IT'S LIKE TO BE POPULAR?

While Exum is the star of the showcase, Rudy Gobert and Rodney Hood garnered a lot of praise for their play last night.  Here are just a few for Rodney Hood.

Las Vegas Summer League, Day 4 grades - TrueHoop Blog - ESPN
Rodney Hood, Utah Jazz | Grade: A This might have been the best shooting performance we’ll see this year at Summer League, but there was more to it than just knocking down 7-of-10 from deep. There was a lot of nuance present here as well, as Hood put it on the ground and found open teammates, and when he was off the ball, his ability to float to open spaces and relocate was downright superb. Having a corner shooter like this with a point guard who can penetrate (think John Wall-Trevor Ariza) can lead to some beautiful jazz. --Foster 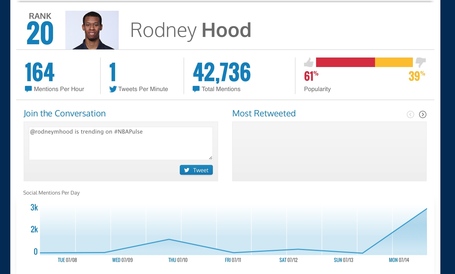 Las Vegas Summer League, Day 4 grades - TrueHoop Blog - ESPN
Rudy Gobert, Utah Jazz | Grade: A This was fearless rim protection at its finest. Gobert seemingly contested every Buck bold enough to venture into the paint, and even when Giannis Antetokounmpo caught him on a dunk, he came right back down the floor and returned the favor. Jazz-Bucks was one of the best Summer League games I’ve seen in four years from an individual performance standpoint, and the presence of a shot-blocker and athlete of Gobert’s quality only made it feel more legitimate. --Foster

Rudy Gobert, Utah Jazz Gobert was active and made an impact in Utah's lone game so far, making the public address announcer at the Thomas & Mack Center who couldn't pronounce his name take notice. Thanks to octopus-like arms, Gobert draws a lot of contact when he gets the ball. Still, his efficiency will be limited if he can't shoot a decent percentage from the foul line. He grabbed six offensive boards against Philadelphia but was just 3-for-9 from the line.

Aaaand, of course, Birthday Boy #3, Happy Birthday to @dfavors14 from all of his fans at @slcdunk .com pic.twitter.com/7NuNLJAJSf