NBA Summer League 2014: Do the Utah Jazz need to beat the Denver Nuggets?

Share All sharing options for: NBA Summer League 2014: Do the Utah Jazz need to beat the Denver Nuggets?

In the game preview (here) we discussed the game and what to expect form the Denver Nuggets. But the question is, with one win in the prelims, do the Utah Jazz need to beat them? After going over the archaic rules that govern this tournament (Did you know that if you beat a team by 10 points you are supposed to get a wheel of cheese from their town grocer?) I've come to learn that the Jazz really do need to win tonight.

Because the Top 8 teams in Vegas get a first round bye in the tournament, and are one step closer to being champs. And as it stands right now, the Jazz could be a Top 8 team. 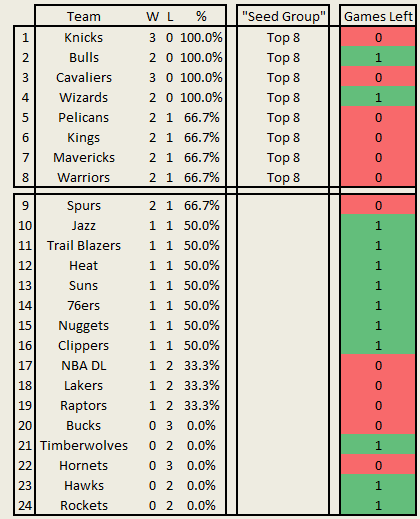 For the Jazz to be in contention for a Top 8 seed they need to:

b) have the Chicago Bulls lose

d) make it through the gauntlet of tie breaker rules for all the team who finish the prelim stage 2-1.

Is there a huge difference in talent? Yes. If the Jazz win and win by enough to be a Top 8 team then it's the difference between playing the winner of a match between the NBA DL team and the 76ers -- or playing against the Spurs.

I want the team to win, and do really well in this tournament. Not because I think it means something. It doesn't. Ask Ian Clark how his Vegas 2013 MVP trophy makes him feel. I want them to win more and more games because it means that the Jazz are getting the MAXIMUM out of coming to Vegas. More games. More practice. A better look at the players here. And more chance to remove some of the question marks about our players.

So do the Utah Jazz need to beat the Denver Nuggets tonight?