Research often takes you down the unexpected path

While I do not get to read every comment on every post (either a FanPost, or a post from one of our teammates here), nor do I get to read every thing thrown at us via social media I have come across the idea that some people want to begin evaluating Dennis Lindsey, the current GM of the Utah Jazz. We're only 13 months into that era, so I think that's a little premature. That's just my opinion though. However, because I always want to provide the content that people desire I needed to look at this systematically. And the first step in trying to evaluate Dennis Lindsey is to, duh, build a frame of reference for him to be compared against. Ideally you find a few metrics that matter, and start to plot them. And for Lindsey the two immediate axes (the plural of axis, not, like, hatchets) have to be against his NBA peers, and against Utah Jazz history.

As a result, the first stop on this tour is to check out how Kevin O'Connor did.

The TL part of TL; DR

Kevin, still with the Jazz front office, inherited John Stockton and Karl Malone after their NBA Finals days. Joining the team from the Philadelphia 76ers he was tasked with prying open the window of opportunity for the aging core. Unfortunately diminishing returns ensued, and the Jazz would end up missing the playoffs for three straight seasons after John and Karl had rode off into the sunset.

The ensuing rebuild was side tracked by Jerry Sloan winning 42 of 82 games in one season. The team was built to fail, and get a good pick in that 2004 draft. But to do that you'd need another coach. KOC was then forced to rebuilt hastily and spent a lot of Larry H. Miller's money in one off-season with free agent contracts to Andrei Kirilenko, Carlos Boozer, Mehmet Okur, Carlos Arroyo, and Gordan Giricek all within a few weeks of each other. (Only Carlos Boozer and Mehmet Okur were from other teams, the other three were re-signing with the Jazz.) Serendipity came in a heavily injured season which allowed KOC to use pieces to move up in the draft to get Deron Williams. All in all, this process took three seasons to go from Stockton and Malone to winning 9 games in the playoffs in one year. (N.B. Total KOC playoff wins with John and Karl = 8; Total KOC playoffs wins with Deron in his 2nd season = 9)

Utah would never get up that mountain that high again, being the bookends to Los Angeles Lakers and San Antonio Spurs championship teams. The hasty rebuild was partly to blame as the team could not afford to keep the talent they quickly picked up. The last few seasons of Deron Williams ' Jazz career involved a number of salary dump trades that both worsened the team and disinclined the star to stay with the team that drafted him. 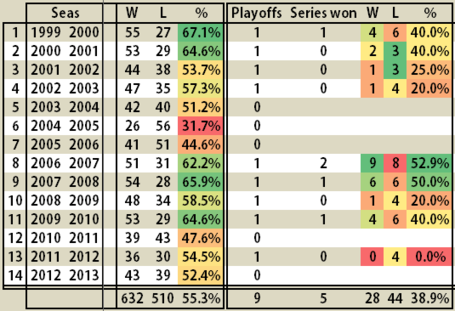 How good is a 55.3 winning %? That's winning about 45.38 games a season. Winning 45+ games a year for over a decade is very far from bad. It's not like winning 50+ games for a decade though. It's consistently putting out a good team that wins more than half of its' games, but very rarely is it a great team. In fact, the Jazz went for 50 wins only three times post Stockton and Malone. In addition, the team did not really kill it in the playoffs. They got there. They got there, rounding up, 2/3rds of the time. And advanced 5 times in 14 years, so about 1/3rd of the time.

Glass Half Full: 45+ wins a season, and many playoffs

Glass Half Empty: Never really a contender, stuck in mediocrity but still managed to win a lot of home games, and thus earn the right to get bounced in the first round in 5 of the 9 playoffs the team made.

It's very tough to win in the West, and very tough when you don't have a star. It took the Jazz a while to get theirs in Deron Williams, and KOC did have a number of really solid starters around him. These were some of the more fun Jazz teams to watch, but were just not able to compete against the top teams in the West. Very few teams are.

KOC had to deal with situational issues that he wouldn't have had to face if he was in a larger market, or with a team owned by a richer owner who was more willing to spend ridiculous money. I think that he did a good job all things considered. The Jazz made the playoffs a lot, which is something they apparently value over actually being a real contender.

Adding pieces to improve the team

While KOC inherited Stockton and Malone, he also had to deal with the eventual retiring of Stockton and Malone, and Jeff Hornacek , and a bunch of other really solid pieces. You can't stop and just be satisfied with what you have as a GM. You always have to be working harder to improve the team.

The two "easy" ways to do that is through the draft and free agency.

It is hard to give an overall grade for the draft. My my subjective measure 12 of the 32 guys he picked became useful, NBA rotation players. That's a 37.5% success rate -- but let's be real here. Very few 2nd rounders become rotation guys, and many of these guys were second rounders. Secondly, it's not like the Jazz were lucky to win the lotto a few times and get a #1 pick four times in a generation like the Cleveland Cavaliers have. So it's hard to simply give him a grade of 37.5%, but it's hard to find more objective measures.

KOC picked four solid second rounders in Jarron Collins, Mo Williams, C.J. Miles, and Paul Millsap. His six lotto picks were Kris Humphries, Deron Williams, Ronnie Brewer, Gordon Hayward, Enes Kanter, and Alec Burks. Were there better guys after each of those players? Yes. But where these six guys eventually solid NBA players? Also yes. If you want to poke holes here, his end of the 1st round draft picks weren't that great. It's a huge toss-up at this point, there are many misses. I am still mystified to this day that Morris Almond did not work out.

At the end of the day, more misses than hits. But I think ALL GMs have more misses than hits. Millsap and Mo Williams both at #47 were great picks though. Deron Williams and Andrei Kirilenko were All-Stars and Olympic medal winners with their countries. Kevin did make some big misses too. So I think an average grade here is fair, slightly skewing towards the below average side. (So instead of a rating of 45 to 55, maybe a rating of 41 to 51? I don't know. Math is hard.)

Free Agency is where things really look bad. There are a few periods here, restocking a vet team with more vets; rebuilding a talent poor team; and then, cobbling together a team to make the playoffs that doesn't cost a lot of money. Save for opening up the bank vault to over pay for Mehmet Okur and Carlos Boozer I think these were all failures. Of course, it's hard to attract people to Utah. Even when they were a winning program going to he Finals good players didn't want to come to play there.

The 12 of 41 subjective ranking I have, I think, is a good indication of how many of these guys were good in a Jazz uniform. And that's a very low success rate. No front office exec is perfect, but I think KOC didn't do a great job with free agency. He hit a few home runs in the draft in addition to a few pop flies. But in free agency he struck out a lot. That's a shame because . . . he just killed it in trades.

KOC has great connections and made great trades. Sure, he piggy backed on a lot of other trades, but he was able to collect assets and then cash them in for something greater than the sum of the parts. 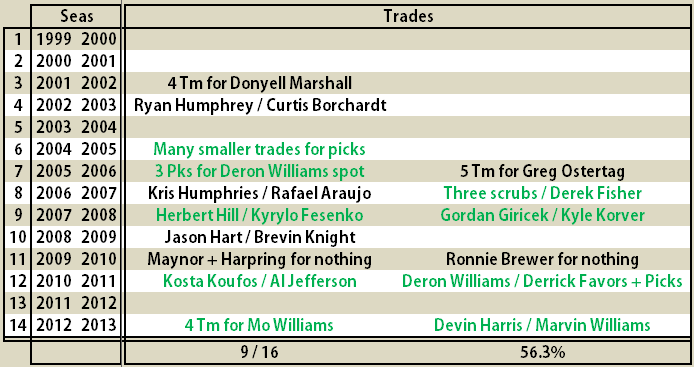 There are some obvious salary dumps here that were straight up necessary with the constraints he was dealing with, and yes, some of his draft days trades didn't always work out -- but for the most part he did improve the team through trades, even if it was just for the short term.

I can only imagine how great our teams would have been if he was half as good at free agency as he was at trades -- the Jazz probably would have had a few more 50+ win seasons in the D-Will era, actually have home court in the playoffs, and avoid playing the Los Angeles Lakers or San Antonio Spurs for a bit. A few more 50 win seasons and 2nd round exits would clearly improve the overall impression of the KOC era.

Using KOC as a frame of reference:

O'Connor had a challenging spot to be in, being tasked to prolong a contending team's life, then rebuild quickly, and then patch together a team on a budget. He did an okay job at each stage. The on court performance of the teams he built were greatly aided by the fact that a Hall of Fame Coach was the one leading them -- he took a team built to tank to 42 wins, after all. And instead of getting a Dwight Howard in '04, the Jazz ended up dipping into restricted free agency to kick start their next climb back up the mountain. Free Agency became a curse as he was increasingly pressed to trade for people on expiring deals, or sign mercenaries outright from the open market.

Only two players he drafted signed extensions to be with the team after their rookie deals.

The team saw success, but I don't know if you could characterize the 14 years here as successful. Zero titles. One Western Conference Finals appearance. Five 50 win seasons. One star player, who now currently plays for another franchise.

Obviously I think the main issue when looking at KOC and the KOC era is you have to put it together with the rest of Jazz history and the rest of the NBA. Using him as a single point in a vacuum makes my analysis of his performance look like I'm just a hater. And to some very young Jazz fans that is exactly what I am. And that's fine with me.

But if you compare the KOC era to the Frank Layden / Scott Layden era then you are at least then given two data points -- and you will be able to better understand where I am coming from.

If all you know is the KOC era than what I call mediocrity is what you call your normal, baseline value for what you know the Jazz to be. And if you know the Jazz as a team that is perpetually a 5, 6, 7, 8, 9 seed in the West then you don't know the Jazz like I know them. And again, that's not a value assessment. You're not a bad person for being young. Your frame of reference is just smaller than mine.

I am #TeamLindsey all the way. I'm not in love with KOC's performance with the club, but I do understand the challenges he had. He had some advantages too. But when comparing the two, KOC seemed to be much more reactive, and Lindsey active. With more time we'll know for sure how Dennis stacks up against the rest of his peers, and the ghosts of past Jazz front offices.