NBA.com To Utah Jazz: You're fun but you still suck. The Downbeat #1412

Jazz don't fare too well in the NBA.com Power Rankings

Share All sharing options for: NBA.com To Utah Jazz: You're fun but you still suck. The Downbeat #1412

It's a new season!  It's a new hope!  It's a new coach!  New fun players!  And here's NBA.com to burn down your hopes and dreams.

I honestly can't blame them for making that connection.  Under Tyrone Corbin, the Jazz were the worst team offensively and defensively.  In short, they sucked.  Their offense sucked.  Their players sucked.  Their defense sucked.  Now can that all be attributed to last year's coaching?  The Utah Jazz hope so.  They hope that by bringing on Snyder that the Utah Jazz become greater than the sum of their parts.  If not then the Power Ranking of 29 out of 30 teams (76ers being the only team that's worse) will be an accurate depiction of this season.

Tom Haberstroh of ESPN.com ran a troll post about the best and worst free agent deals for this offseason.  This is what he had to say about Gordon Hayward.

Behold the Salt Lake City premium. Hayward is a fine young player, but the Jazz were forced to overpay in order to keep a player of his caliber to Utah. Charlotte, another small-market squad, forced the Jazz's hand by handing him a max contract, one of the richest deals of the offseason. We hear a lot about Hayward's membership in the exclusive 16-5-5 point-rebound-assist club. RPM's more comprehensive viewpoint isn't as bullish on his game. Hayward does have room to grow and he'll need to do so to justify the lofty price tag.

Looking at the statistical point without any viewpoint makes this deal look terrible.  But as he says, this is the Salt Lake City premium.  Utah has to overpay for its free agents much like one has to pay for higher gas prices on a road trip.  Yes, there are cheaper deals out there off the interstate, but those cheaper gas stations aren't going to help you get where you're going, and they will ultimately make you late to your destination.

Paying Hayward more now hurts.  The consequences though of not paying him, though, far outweighed the consequences of paying him.  I think this could be a deal like the Charlotte Big Al deal of last year that while mocked now will look like a bargain when Hayward's strengths are utilized by a new coaching staff.  Also, don't discount the power of the odd year upswing in Hayward's career arc.

If only there was a website that had Exum t-shirts that had Exum's name look like the Exxon logo that included Australia in Jazz note.  WAIT. 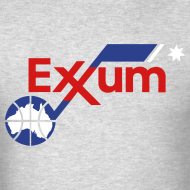 Hit up Velociraptees for all their styles.

Great things are being said about Dante Exum.  IT JUST FEELS SO GOOD TO BE LOVED.

Seven standout players from Las Vegas Summer League | ProBasketballTalk
Dante Exum (Utah Jazz). His numbers were not standout — 7.2 points a game on 30.8 percent shooting — but there were flashes where you realized this guy is going to be very good. He has a real star quality about him. He has a wicked hesitation dribble with a crazy-quick burst. He is tall for a guard and that combined with a fantastic floor vision leads to some very smart passes. He is very quick with the ball and can get into the paint. He has a lot of work to do on his shot and being a floor general, but in a few yeas the Jazz may have a steal here.

The fun storyline heading into this season is how quickly Skynet becomes self-aware.  Dante Exum actually had a great summer league considering he hadn't played organized basketball outside of a workout environment for most of a year.  Once Exum has some more basketball conditioning with the Australian team and a training camp with Quin Snyder he'll be starting to put it together.  While I don't think he challenges Trey Burke for point guard supremacy, there will be times throughout the season where Exum, a 19 year old who didn't play basketball for almost a year, will look better than the National Player of the Year, Burke.

Something to think about as we ponder about Rudy Gobert's fantastic Summer League.  Rudy Gobert's maximum earning potential for the next FOUR YEARS is only $100,000 than Enes Kanter's Qualifying Offer for the 2015-2016 season alone.  Something to chew on while the Jazz have to ponder how Enes Kanter will fit on the Utah Jazz's roster long term.