The Downbeat #1415: The Dennis Lindsey is the Best GM in the NBA Edition

Share All sharing options for: The Downbeat #1415: The Dennis Lindsey is the Best GM in the NBA Edition

It is no secret that I am a huge fan of Dennis Lindsey.  I could not be more impressed with what Lindsey has done in such a short period of time with the Utah Jazz.  Dennis Lindsey is a wizard.

A few months before Lindsey was hired, I was emailing with a close friend. I emailed this to my friend.

Who is going to save the Jazz?

At the time I felt like we were muddling along in mediocrity. Jerry Sloan had been gone for over a year. We weren't making any splashes in free agency or the playoffs. Everything was just meh. It seemed like there was going to be no difference between us and a team like the Minnesota Timberwolves or the Sacramento Kings. It felt like we were just going to be another small market team in an undesirable market. A team that had no identity. A small market team in an undesirable market CANNOT not have an identity.

Then along came Dennis Lindsey!

Dennis Lindsey joined the Jazz in August of 2012. Things have slowly been improving since.  What are some general things that Dennis has done to make this Jazz fan happy again?

Those are only a few things that Dennis Lindsey has done that makes me excited to be a Jazz fan again.  I created this cheesy cheesy slideshow to show my happiness. Thanks to Moni for some of the photos.

Speaking of saving the Jazz.  Larry H. Miller *literally* saved the Jazz from becoming the Minnesota Timberwolves. My friend who works for an NBA team (not the Jazz) sent me this pic. He was going through his team's archives and came across this. HOW COOL!!! 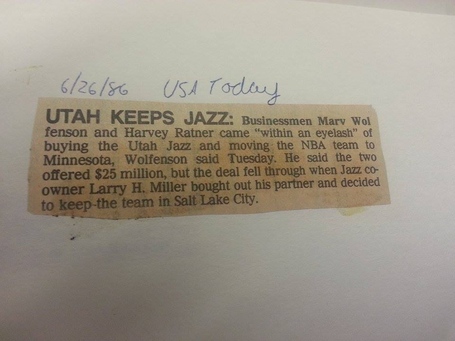 If you could tell thanks to Larry... what would you thank him for? What is your favorite part of being a Jazz fan?

One of my fondest memories of Larry came shortly before his death.  Larry hosted a sing-a-long at Christmas time at the ESA. The entire lower-bowl was full, we all sang carols together accompanied by the Utah Symphony. It was an amazing night. Larry spoke to the crowd. He said it had always been his dream to see the community come together and sing and celebrate Christmas together. He wanted to feel the warm feelings  of Christmas time altogether.  I don't cry easily but I had tears in my eyes when Larry spoke to the crowd that night.

My love for Larry grew more when I read his book Driven. Moni wrote a book report on it when she read it.  I loved this part of her recap. I absolutely loved this about Larry. Larry was a fan like the rest of us, he started out a poor kid who had nothing, I don't think he ever forgot that part of his life.

–LHM was Every Man. Remember the time he showed up on Retro Night in a Jazz note uni complete with short shorts and headband? He could laugh at himself, and he was every bit as much a fan as the rest of us. He also insisted that players call him by his first name (which Jarron Collins could never do). If Deron called him "Mr. Miller," he called Deron "Mr. Williams." Karl Malone affectionately called him "Mr. Larry."

Trevor Booker was recently signed by the Utah Jazz. We have discussed it quite a bit at this site. Layton featured his love for cereal. I had planned on devoting part of this Downbeat to Booker's love of cereal  when I read this article (Read it it goes into more detail than Layton covered in his Downbeat)

But since we already touched that I thought I would share something else.  It seems like it is very important especially in the last few years for the Jazz to sign and draft high character players. Comments about character and homelife come up quite frequently when Randy Rigby or Dennis Lindsey is talking about the team.

Here is a story about when his infant son had surgery last winter.

"If something had went wrong or it had been a complication during the surgery, there was no way I was going to play," Booker said. "It was tough. I wanted to be there with him. And I knew the team needed me. The surgery went well, so that’s why I decided to come play."

Booker seems like a great family man  who will fit right in with the Utah Jazz.

Dennis Lindsey did an interview on KALL (ESPN 700) a few days ago.  As always Dennis had interesting things to say.  The part of the interview that stood out to me the most was when Lindsey talked about Alec Burks. I LOVE Burks and want him to be a big part of our team. I think he is exciting, athletic, and fun to watch. Here is what Linsey had to say about Burks (via Moni)

How or where do you see Alec Burks fitting into this team?
Many people don’t realize this. Over the last three years, Alec has been one of our more consistent, off-season program players that have, has really plugged in day to day, whether that be at P3 or mini-camps or open gym. Again, he was here for summer league training camp, for two-a-days for two days. He was excellent.

So we just are thrilled with where he’s moved his body. He’s become, Alec was always a plus-athlete. I think he’s improved his athleticism, plus he’s a more stable athlete that is less likely to get injured than the day we first got him, because of the things that Mark McKown, Isaiah Wright and P3 and frankly all the work Alec’s put in.

So, Quin [Snyder] and the coaching staff are really excited. Starting, you know, [or] the Manu Ginobili role, it’s safe to say that Alec Burks is gonna be a playmaker for us and we’ll let the team kinda define itself and see where it’s best to have his points and ability to get in the deep paint to complement our group, whether it be as a starter or, again, as a go-to player off the bench.

I love all the compliments and all the praise Linsey showers on Burks. I love that its not just the he's young or the get better talk we got used to the last four years.

Alex Kennedy wrote a very favorable article about the Jazz.

Kennedy talks about the Jazz's young core, Coach Quin Synder, the tandem of Exum and Burke and the possibility of becoming a perennial playoff team with talent at every position! Go read it!

Their roster features a number of lottery picks such as Trey Burke, Dante Exum, Derrick Favors, Gordon Hayward, Enes Kanter and Alec Burks as well as additional first-round picks like Rudy Gobert and Rodney Hood. They have young talent at every position and this team could be very good in several years, if Utah’s coaching staff is able to maximize the group’s potential.

Its an exciting time to be a Jazz fan. I personally can hardly wait for training camp!