The Utah Jazz franchise hired outside of their own Walder Frey system for the first time in a long time. So what did they get?

One of the best things about being a Utah Jazz fan for over two decades is that you were a fan of a team that valued consistency. You had ownership consistency, which lead to front office consistency, to head coaching consistency, and then it trickles all the way down to consistency on the court. Because of this consistency two things happened a) things were the same nearly year after year, and b) because of that you could identify if something is working correctly or not.

We, dumb, non-Insider, fans knew if the Utah Jazz were playing well or not, executing the offense or not, or doing what they were supposed to do or not because we had seen the same plays run for over five presidential terms. But that worked out for the Frank Layden --> Jerry Sloan --> Tyrone Corbin Jazz era.

And that era is over.

Sure, Jerry is still around and Frank does interviews. But the basketball Utah Jazz fans are going to see this year isn't specifically going to be the Utah Jazz basketball that we grew up with. Sure, fundamental similarities will be there (after all, we know how close the Utah Jazz / San Antonio Spurs franchises are) -- but what Quin Snyder is going to bring to the team, and make the team run, isn't that same old (or remixed, or re-remixed) Dick Motta offenses of the past. In fact, we can only guess what it's going to be like. We're just going to have to wait and see.

So long Flex. Hello possible non-position limited modernization of offensive system based upon over two decades of coaching on every level and all over world.

Over the last few weeks I've been trying to get my hands on all Duke, Missouri, Austin, and CSKA film as I can. Why? So I can see what we're supposed to see our offense do. (Again, it was relatively easy to analyze what was going right with the Jazz because I had seen them do it right for years. The system is changed now, and I need to build a frame of reference for that. I know, not every blog is so steeped in Rational Empiricism. Other blogs don't even know what that is.)

One thing we do know about Snyder as a head coach and as an assistant is that his teams win. He has a career record of 616-385 as a coach (assistant or head or whatever). That means he is around winning programs, programs that win over 60% of the time. 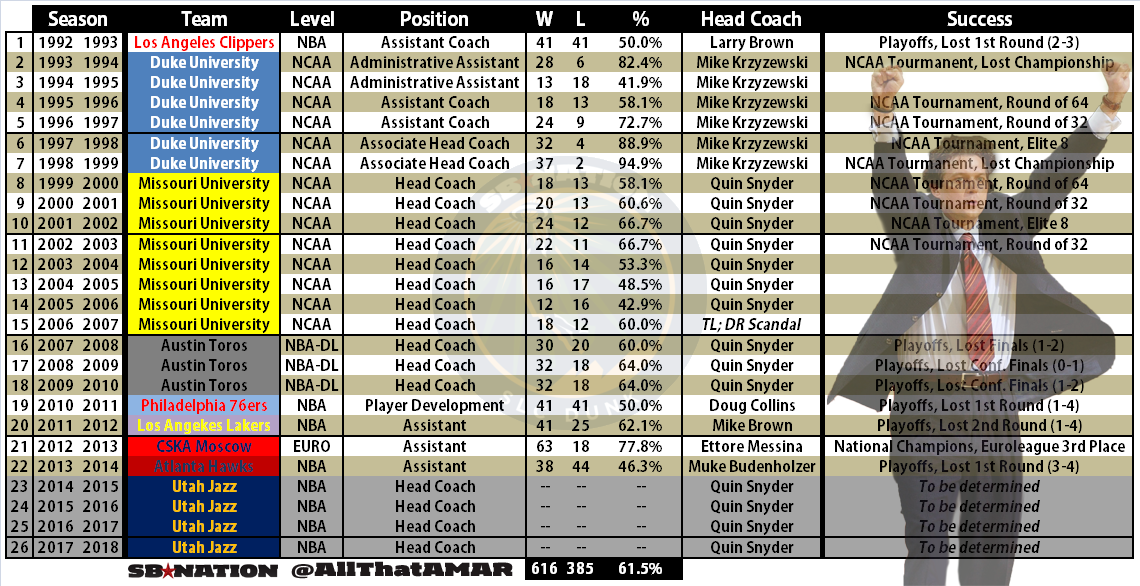 Sure, there aren't a lot of championships there, but there are two very important take aways.

So it's not like we're hiring a loser to take the reigns. Dude comes from an impeccable pedigree, and if you look at the guys he has been coached buy / coached under you understand why this is.

And the end result is not just that he's a lucky guy who bounces around to winning programs. It's clear that is a big part of what makes those programs win. He has four years in Utah with which to make something happen. He helped make Duke, Missouri, and Austin turn around in short time. The Jazz, though, go back to stability and patience. That's the one thing I think they'll never give up on. So here we have an opportunity to see what Snyder can do over an extended period of time without looking over his shoulder.

He has never won a title, and neither have the Jazz. But together I am certain that the next four years are going to be filled with small victories. We're on the way back up. And a big part of that is going to be Coach Snyder.