Share All sharing options for: The Downbeat #1398 - Free Agency Madness

NBA Free Agency makes people go absolutely bat guano crazy. For some reason when this period comes around we abandon all reason and logic. I have seen people lambaste players for things that would be most odd in the regular world.

If you knew a guy that was interviewing for a bunch of jobs to see where he would like to work and who has the best salary and benefits, would you call that guy selfish and ridicule him in a public forum?

Is it wrong to take some time to think about your decision about where you want to work for the next 3-5 years of your life? 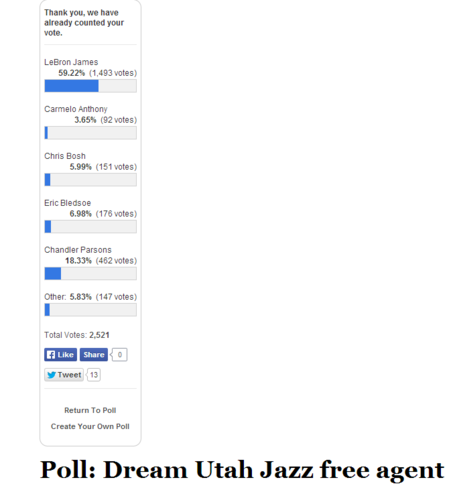 You don't say? Via, SLTrib.

Even the players are getting in on the action. Look at the situation with Lebron. He has been accused of hijacking the entire free agency process, but no one is forcing every team to sit back and wait for him to decide. Three quarters of the league have space for a max player and most are holding off on the snowball's chance in hell that he may call them out of nowhere and say he's signing.

Half the players are doing the same thing. The money is still out there. The roster spots are open. If Wade, Bosh, and a dozen other free agents wanted to decide, they could have. But none of them, especially the veteran championship mercenaries, are signing unless they know they can ride Bron's coattails to a title. No one is stopping Marvin Williams from signing a decent mid-level contract with a half-dozen teams right now.

Speaking of Marvin, and the absurdity of free agency, I saw a person tweet that they would rather have Marvin at $7mil-$8mil than Hayward at $15mil. What world is this? Only in the loony world of free agency is this a thing someone would say. First of all Marv is 28 and has already shown significant signs of his body breaking down, with the recurring achilles injury. Some will bring up shooting, but over the last 2 seasons, there hasn't been that much difference between the two.

You can compare their stats here and here

I can only assume that this is related to some sort of deep psychological trauma brought on by the AK max contract.

ICYMI - Next Thursday we are hosting a free open practice! ESA at 7pm, doors at 6pm. Details: http://t.co/KhFQa9kuwE pic.twitter.com/N5tr5nkh2m

You may remember this as the summer league squad open practice that was previously slated as a season ticket holder only event, until a violent Twitter proletariat uprising forced the Jazz to change it.

And they upped the ante:

The first 10,000 fans at the summer practice will receive a free Exum/Hood t-shirt pic.twitter.com/wttdqn2XuO

What are you doing to fill your time this offseason? Baseball? World Cup? Binge watching tv shows?