Hello everyone, and welcome to this week's edition of my juju.

Today I am delving deep into the last 30 years of NBA history (1985-2014), of every team's record year by year to try to deduce what makes a rebuild a success or a failure.

To quantify a successful season or rather a prosperous season, I set the minimum threshold at 50 wins. In the first image below (click to enlarge to be able to actually read it), every team's season with at least 50 wins is a shade of green, and everything below is a shade of orange/yellow (31-49 wins) or red (30 wins or less). I also included each team's average wins of the last 30 years (Jazz in 3rd place), 20 years (Jazz in 3rd place), and 10 years (Jazz in 11th place). Teams are sorted by 30 year average. 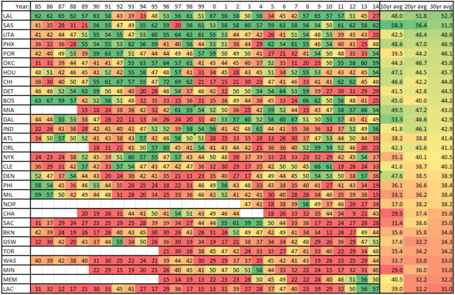 The despised Lakers and respected Spurs are obviously at the top of the list for most successful seasons of the last 30 years. By the eyeball test, I would say the Jazz and Suns of the 90s as well as the prime-Dirk Mavs are 3rd-5th in some order in terms of successful seasons.

Those teams in the bottom half have had it pretty rough, and I'll just leave it at that.

We have a large sample size here, and I pondered for a while how to define a rebuild. After some trial and error, I decided that consecutive seasons under 50 wins could be considered a rebuild.

Using this same logic, I then quantified success after a rebuild as YOPA, which stands for Years Of Prosperity After. The length of YOPA lasts for as long as the team can go before encountering a string of consecutive seasons below 50 wins.

In the next image I use this logic stated and find how many rebuilds and how successful each of those rebuilds were. I also realize that using the term rebuild is a bit of a misnomer in cases where franchises just began, but for all intents and purposes of this article, I call this a rebuild as well.

Remember, click to enlarge, if you want to be able to actually read the data. 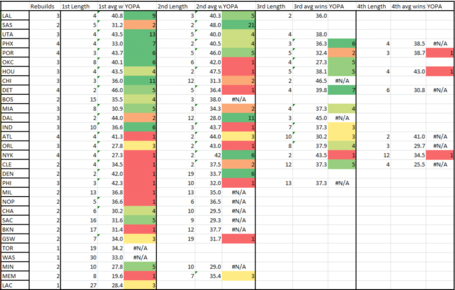 Looking at both of these pictures discussed so far, I would like to propose that the treadmill of mediocrity is a bit of a myth which doesn't occur very often. But rather treadmills of futility occur much more frequently.

I hear rather frequently fans of teams would rather have their team bottom out for a couple years rather than be stuck on a treadmill of mediocrity that never gets better. But from the data above, having a couple horrible seasons doesn't necessarily lead to a greater amount of YOPA (years of prosperity after). Rather, both the average number of wins during a rebuild as well as the number of years that a rebuild lasted had little to no correlation, as seen in the photo below. 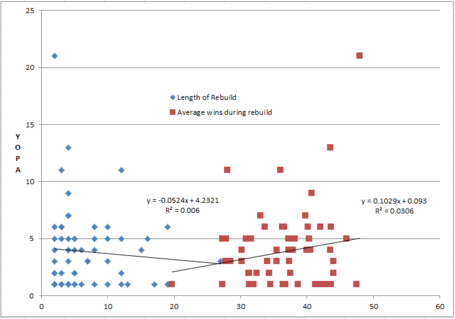 This lead me to be quite dissatisfied, so I did more digging. I needed to figure out what rebuilds made a team prosperous for many years afterwards. It has little to nothing to do with numbers of what goes on during the rebuild, but in fact has everything to do with what is gained at the end of a rebuild.

I went on to sort the rebuilds by YOPA (years of prosperity after) to see what the successful rebuilds had in common. Turns out I was overthinking this whole thing, the properties of a successful rebuild are actually quite simple..... 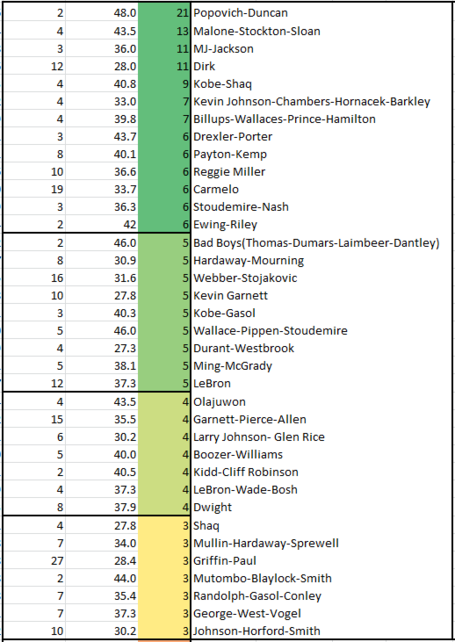 In order to have many years of prosperity after a rebuild, it hardly matters what the hell you do during the early stages of the rebuild at all. What does matter is that you get a superstar someway,somehow towards the end of the rebuild.

If a superstar cannot be had for your team (which is a common problem as there are only a few superstars in the league in any given year for a hungry 30 team market), you better make sure you have a top-tier coach or an excellent system with a bunch of decent to good players.

If you look at the first picture again, you can see how every team needs to rebuild every now and then. They stockpile talent and ride out their wave of success, to see how good they can be, and for how long.

Hopefully this current Jazz core can improve to be a 50 win team in the next 3 years and stay that way under the reign of Quin for a long time, or else our rebuilding process could very well end up looking like one of the teams in the bottom half of my 1st picture....not a pretty sight indeed.

That said, we have currently finished year 4 of the rebuilding process according to my methodology. The average rebuild in the league in the last 30 years in 6.6 seasons, while the median is 4.5 seasons (this only counts rebuilds that have ended).

Here's to hoping that the Jazz can utilize this bottom-out season of 25 wins that they had and use all their assets to build an excellent team system as well as hopefully give us a chance of either developing the next superstar, or acquire one in the near future via either trade/draft.

So you heard it here folks, it doesn't matter how bad your team is or for how long. What does matter is that a team needs stars and/or one of the best coaches in the league to succeed. To get this to happen, there needs to be excellent management from the front office itself to put the team in a position to make this happen.

Dennis Lindsey, Greg Miller, and whoever else is in charge of the Jazz, let's make this happen!!!!! 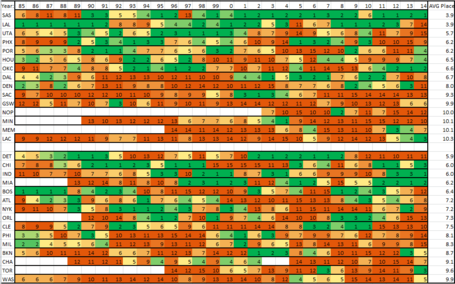 How many more seasons until our teams reaches the 50-win plateau?