Yes, it's cool to see some actual connection between the Utah Jazz and the Idaho Stampede. And in terms of looking like a unified corporation, the fact that you can be called up for an audition with the 'Sr. team' is something a D-League player should be happy about. (I think the last time this happened was when the Jazz invited Kevin Kruger to Jazz training camp when he was a Utah Flash player)

If you are keeping score at home, though, the Jazz have 13 guys on the books right now: Trey Burke, Dante Exum, Alec Burks, Ian Clark, Carrick Felix, Gordon Hayward, Rodney Hood, Enes Kanter, Trevor Booker, Jeremy Evans, Steve Novak, Derrick Favors, and Rudy Gobert. The maximum you can go is 15. So that means there are two spots left.

And according to the evidence presented, there are three guys coming into camp for two spots. And, well, there could be MORE people coming in (and usually there are). We continue to hear rumors about Toure' Murry (which may or may not be accurate), but I think the addition of Dee Bost to the Training camp roster would mean there's less space for him. But what do I know?

What I did know is that Dee Bost has been on the Jazz radar for a while. He was brought in for a pre-draft work out back in the day, and since that time has been a player who was invited to and participated in our last two Free Agent mini-camps. Kevin Murphy , well, we already know much about him. We drafted him, and he made the team as a 2nd rounder and rarely played. (Flashback: my really long post about him after the NBA Draft 2012)

Because SLC Dunk has the best readers around, I felt it necessary to break it all down for each of you to see. These are the guys who are coming into training camp, how old they are going to be on October 31st, 2014, and where the Jazz have seen them before. (N.B. I assume everyone on contract makes the team this year, hence a guy like Carrick Felix being there for training camp and team.) 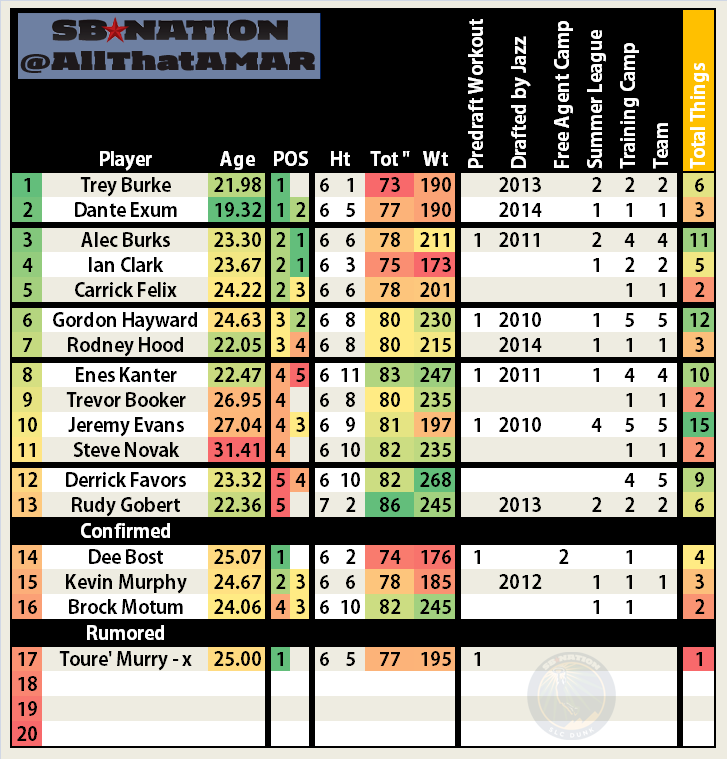 Anyway, I am happy for competition. The Jazz still need a full-time third string point guard (if just for the sake of injury insurance), and Bost is a pretty interesting choice. The Jazz obviously like him because they've kept bringing him back for workouts.

If you want me to break down Dee Bost in more detail, just tell me in the comments below.