The Downbeat #1431: The Its A Very Tweety Downbeat Edition

Ian Clark answers fans questions. Stockton's daughter shines. Its the offseason so not much more.

Share All sharing options for: The Downbeat #1431: The Its A Very Tweety Downbeat Edition

You get me two weeks in a row. It has been a little while since I have written a Downbeat two weeks in row.  You'll have Moni back next week.

Ian Clark is busy on a Jr. Jazz trip this week. Yesterday he took time to interact with Jazz fans on Twitter.

Ian Clark is on the road and will be taking over the Jazz Twitter in 30 mins! Send in your ?'s using #AskIanClark. pic.twitter.com/LRj9Z1yhhx

Here are some of the fun questions he answered. Lets start with mine!

This was one of John Stockton's favorite places to play also.

This is one he answered from BBJ although BBJ had much better questions that went unanswered.

Here are a few of BBJ's other questions.

Check out the Jazz's Twitter page for the rest of Ian Clark's answers. I love getting to know Jazz players better. Thanks to Ian and Jazz PR for doing this.

I like Gordon Hayward's PR team at @athleteint. They attached a screenshot of his blog's bullet points. Ha, touché! pic.twitter.com/PD9QUMSQAP

I am glad that Hayward is getting this experience playing with all star- level players.  It must be an amazing learning experience to play with these great players. It must have been hard for all our players especially a player like Hayward who is so competitive. I can't imagine what it would be like to play with a team that was rudderless for a few seasons. I imagine it  has been a breath of fresh air for Hayward to participate with Team USA this summer?

How would you like to see Gordon Hayward improve his game for next season?

John Stockton's family is full of athletes.  We have witness of this from their tribute to Karl Malone a few years ago.  Check out Moni's post of  the Stockton's tribute his with all the gifs here.

Link to article on Laura.

Read the article on Laura. There are great quotes from John in the article and John's childhood coach Kerry Pickett. Pickett has not only coached John but a few of John's children including Laura.

First a fun story from Pickett about Stockton in the 7th grade:

"One day, when John was in the seventh grade, he came to me in tears because he said it seemed like I was picking on him," Pickett said. "I said, 'Yes, and that's not going to change.'"

Pickett, who was in law school at Gonzaga at the time, said John's father, Jack, had given him a job tending bar at his tavern. In return, Jack had asked that Pickett get the most out of John on the basketball court.

"I told him that Jack was my friend and that I had made him a promise," Pickett said. "John never brought it up again. He just outworked everyone."

"She's not flashy, and she doesn't have track speed," he said. "But she has a tremendous burst with her first steps, and she plays with great balance and vision.

"And the best thing is that she gets better every month. When she is 20 years old, I predict she will be two or three times better than she is now."

"She has always seemed to get it," he said. "For example, we didn't put her into soccer right away because we thought it was too early. But they were short a player, and she got dragged in ... and once she did, she knew all the rules and all the angles.

Laura's team went 50-2 last season. Laura is getting interest from PAC 12 teams including Oregon, Big 10 schools and from her parents alma-mater,  Gonzaga.

We love the Stocktons at SLC Dunk. Good luck Laura.

Brad Rock wrote a fun article highlighting games to watch this season.  Rock includes games such as the Lakers, for Boozers return; the Clippers visit and the Spurs.  Rock also includes teams like the Philadelphia 76ers with the idea that the Jazz fans can feel superior for one night :)

What games are you most looking forward to this year?  How many games will you attend this season?

Alex Kennedy from Basketball Insiders had a chat a few days ago.  Kennedy answered a Jazz fans question! 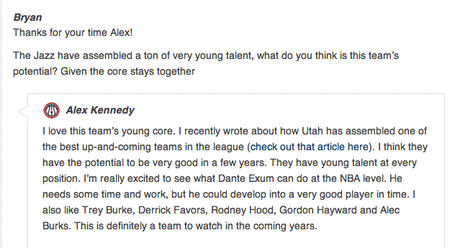