For the past decade, about two lotto teams suddenly make an improvement of 15 or more wins. Sometimes it's a leap all the way to the playoffs (like the Blazers last year). Sometimes it falls short (2014 Suns). I believe the 2015 Jazz are a candidate to be one of these teams. Not the most likely candidate, but a dark horse if you will. This is my third investigation into what it will take to actually get there.

Offensively, the team last year was crummy (25th in the league, measured by ORtg). This is significantly better than the team's defense, of course, which was simply abominable. But I've also looked at the team's overall defense, particularly at allowing uncontested shots at the rim.

Now it's time to look at the offense.

Sure, all are slightly below average, but the last three are pretty close to average. (The ORB% was exactly the league average). And though no specific aspect stands out as terrible, looking at this it becomes clear that to be average-ish at all aspects results in an overall muddled offense.

The total is less than the sum of its parts.

So I'm going to address a couple aspects of offense. First, I'm going to look at several players who dragged the team's eFG% down last year. Then, it seems clear that being average at everything isn't enough. The team needs to become very good at at least one aspect of defense before it will reach an average ORtg.

The team had six players play more than 2000 minutes last year. Of these six, five are still on the team. These are, of course, Enes Kanter, Derrick Favors, Gordon Hayward, Alec Burks, and Trey Burke. Of these five, four of them had an eFG% that was below average.

Derrick, we don't need to talk about you right now. Thanks for your hard work and continuing improvement. Keep it up.

Gordon, Alec, Enes, Trey ... we need to talk about your shooting guys.

He had a terrible year in terms of his shooting percentages. We all know this. We dream of 50-40-90 guys. Gordo has actually pulled this off for a couple months at a time in sundry seasons of yore. But not last year. He was the not-so-dreamy 40-30-80.

Really this was having a dream that Dana Scully or Sarah Walker was rescuing you from a mob of baddies, but waking up and realizing it was Tobias Funke.

So yeah. Gordo wasn't helping us all live the dream with his shooting last year. Mulder understood: 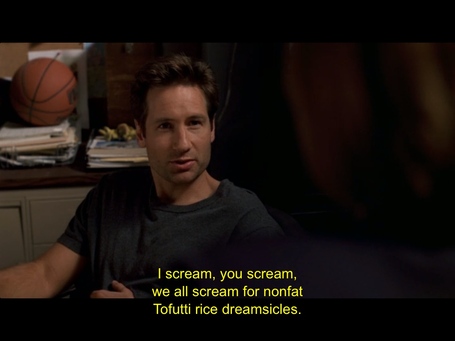 In fact, Dana Scully had a great metaphor for Gordo's season last year too:

The first thing that jumps out, when you look at Hayward's shooting in detail, is that his FG% for 2-point shots was fine. 45.3%. It's on the low side of what he has established as typical, but still fine. It was actually slightly higher than his 2-point shooting a year before.

You see some other interesting things, looking at Gordon's shot location: He shot better at the rim and from long 2 than ever before. He also shot the mid-range shot (10-15 feet) the same as he always has: in the mid-40% (which is decent). The three was awful ... we know that ... but so was another distance: that short 3-9 foot shot. He was also forced into more of these short, but not quite at the rim, shots than ever. He shot 28%. Ouch.

You see some interesting things when looking at Hayward's stats at Synergy: mostly that there are incremental improvements in most of his plays, except spot-up shooting. He shot drastically worse on spot-ups AND they made up a much smaller percentage of his shots.

The stats at Synergy also make me wonder why the Jazz decided to make him a P&R guy, when he's never scored very well as the P&R ball handler. It's just not his strength, and it has never been. Nor does it have to be the primary scoring means for a #1 option (see: Allen, Ray and Miller, Reggie).

So we can see how Gordon's shot went so poorly, to some degree. It doesn't explain his difficulties in spot-ups. My hunch is that it's a combination of random variation, Favors and Kanter not being great passers yet, and just an overall blah season.

Seriously, Gordon looked like he was having about as much fun as Dana Scully doing an autopsy in some boondocks Texas town that only has a produce scale to weigh organs, all because Mulder's convinced there are vampires at large because the corpse's shoes are tied together (this is my favorite scene in my favorite episode of my favorite TV show of all time. In short, this is the TV's version of Falstaff lecturing Prince Hal in Henry IV Part 1):

But the important question is this: how much will a normal Gordon affect the team.

Well, last year had he shot his average percentages from 2 and from 3, he would have scored about 17.6 ppg. That's about 1.5 ppg improvement. We saw when discussing defense that 3 ppg turns out to be about 8 expected wins. So Gordon, doing everything else the same (assisting, rebounding, etc.) but shooting better would be worth about 4 wins.

I don't know if this is really what it's worth, though.

I think Gordon Hayward will thrive in a different role. I think the scoring #'s are going to change for the team this year, and it's difficult to predict whether Hayward will have the same kind of touches and opportunities necessary to pull off 17.6 ppg with 5+ assists.

Though I do think that Quin Snyder's play to the pass philosophy does fit with Gordon's strengths. It includes finding passes in the not-so-obvious ways ... off the cuts, off the curls, off the hand-offs, etc. Since these have historically been where Gordon' scores more effectively, it does suggest that he'll be able to pile on assists, even if P&R ball handler is no longer his primary role. So I'm hopeful.

But one thing is pretty inarguable:

If the Jazz make a big leap in wins this year, a major reason will be because Gordon has learned to shoot and score effectively while being in a leading role.

Here's how I think we'll all feel if it happens: