Share All sharing options for: Possibilities in the Quin Snyder Offense:The Downbeat #1440

A few things that stuck out to me about this breakdown.

The number of plays that we are using from the Spurs. It is not a surprise, just interesting.

The play at the 5 minute mark will probably be more efficient if Kanter pops out for the jumper, and Favors dives to the basket. This thought is based of off their individual skill sets from last year. There is a possibility that Favors has extended his range from 10 feet out to 15 and will be able to pop out. We shall see.

The possibility to run the same play with four different players as the ball handler, Burks, Burke, Exum, and Hayward.

How much the offense will depend on screens and pindowns.

The LHM group via the Utah Jazz ,are helping out in the community as always. Back to school with the Utah Jazz. Via Utah Jazz Google Plus page. 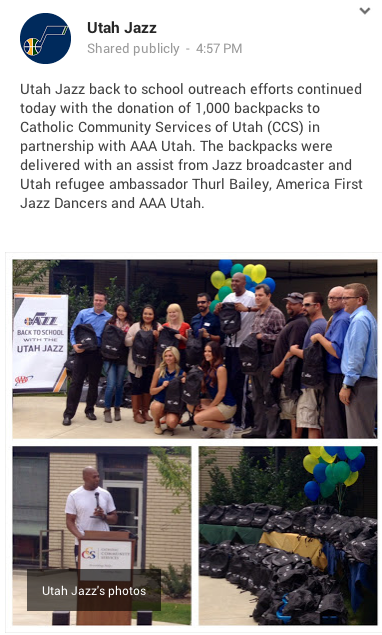 A home town perspective on Toure' Murry from Paul Suellentrop of the Witchita Eagle.

"(Snyder) really reached out to me," Murry said. "He sees me as a versatile player … a young player who can come right in and fit with a young team."

This may have been the case before, but I don't remember it being talked about as much. It is apparent that there is an ongoing conversation between the Coaching staff and the players. With such a young team, communication and setting clear expectations is very important.

Murphy was the Jazz’s offering to Golden State in the salary dump trade that brought Richard Jefferson, Andris Biedrins and Brandon Rush to Utah last season. The former second-round draft pick was soon waived and spent last in the D-League. There, he put together an All-Star season for the Idaho Stampede, averaging 25.5 points, 5.3 rebounds, 1.7 assists and 1.1 steals. He scored a career-high 51 points in February against the Los Angeles D-Fenders.

If you are Quin, Who is your starting five and who finishes that game for you?