Like most of the 14 to 44 age group, I enjoy me some video games. One of the game types I really enjoy are sports games, specifically basketball. I've been buying them consistently yearly since the NBA Live '95 days, but was raised on the Lakers vs. Celtics IBM game that came on two 5 1/4" discs ('88 roster, teams were Los Angeles Lakers, Utah Jazz, Seattle Super Sonics, Phoenix Suns, Boston Celtics, New York Knicks, Detroit Pistons, Chicago Bulls, and both All-Star teams, included NBA playoffs from 2nd round onwards).

This is what fun used to look and sound like. Also Kareem Abdul-Jabbar was O.P. like crazy in this game.

This game has super moves that everyone could do, depending on situation or skill.

More money than I care to admit went into arcade coin-ops like NBA Jam and then Run 'n Gun.

I do remember that the sequel had the best non-licensed version of Chris Morris ever for the "Salt Lake City" team.

And I can't tell you how many months of my life have been spent using the Utah Jazz to win the title over and over again, since I was a teen. But today, despite EA's best offerings, the only 'real' game in town is 2K Games' NBA 2K series.

Seriously, if Dante Exum is in your promo-vids, you've got my attention.

Yeah, I've been playing these games since the old Atari basketball cartridge, and technology has made countless quantum leaps since then. But things aren't perfect, specifically for a fan of an un-cool / small market team like the Utah Jazz. It doesn't help that the people who make this game, ostensibly the only game in town, seem to be biased against the Jazz too. (*cough* 1992 version of Karl Malone can't dunk, and is balding. *cough*) 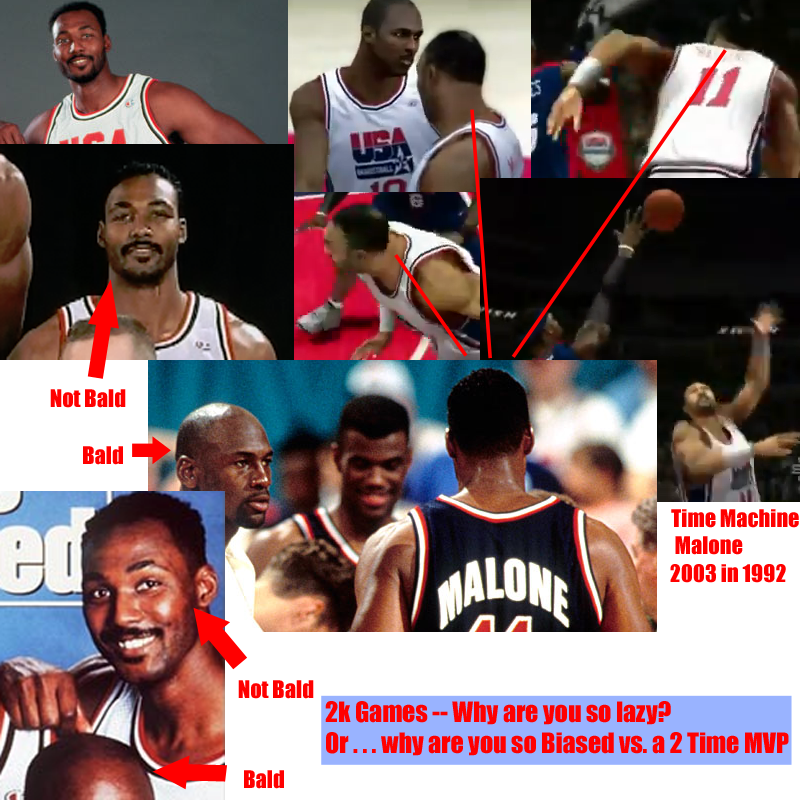 Anyway, here's a short list of things I'd love to see (or alternatively not see) in the next version of the game -- that they know I'm going to buy anyway . . .

I could go on and on, but I will leave some of that up to the commenters. 2K has my money already (I spent four digits on those card packs for MyTeam the last year). But let's make the game a little more a) accurate for all teams, and b) try not to fully piss off small market fans. The Jazz won 25 games last year. I know. Bad team. Unpopular. And in a small market. This season with all the youth, a new coach, and hopefully improved players -- a more fun team to watch in real life -- AND USE ONLINE with.

And, really, if you are only going to watch one of these videos, watch this one. Watch all of this one. You may need to save your spot and watch it quarter by quarter. It's an English guy and his dad discovering NBA 2K14 -- and basketball -- through a preseason game between the Atlanta Hawks and Miami Heat. I love how they discover that some shots are worth three points in the fourth quarter. Moreover, their strategies are hilarious. If you are a Kyle Korver fan you'll want to watch this as he is integral to the dad's strategy down the stretch.

Please note that there are curse words in this, and it's NSFW because of, well, just their reactions to in-game events. It is -- still -- the best video you'll see all day. And it's one of the most exciting games of basketball ever, it goes down to the wire, and in August, if you are a hoophead, you'll take what you can get.

Please watch that vid. It's hilarious. And please, 2K Games/2K Sports, let's not take a dump on the Jazz every year.