Everything going on with Utah Jazz players of the 90s.

Share All sharing options for: The Downbeat #1441: The Vintage Utah Jazz Editon

Did you have an inspiring interaction w/@LHM founder Larry H. Miller? Share it in our new book http://t.co/k1OpSkypov pic.twitter.com/l9ZSwFikPu

We all love Larry Miller. So please participate in this if you have any stories. I plan on writing about my experience at the Christmas-Sing-Along the December, before he passed away.  Share your stories in the comment section too. I love hearing good Larry Miller/Jazz stories.

Everyone knows John Stockton wasn't into giving autographs. He goes into detail about it in his autobiography. (BTW it is now on clearance at Deseret Book if you haven't had the chance to buy it yet) 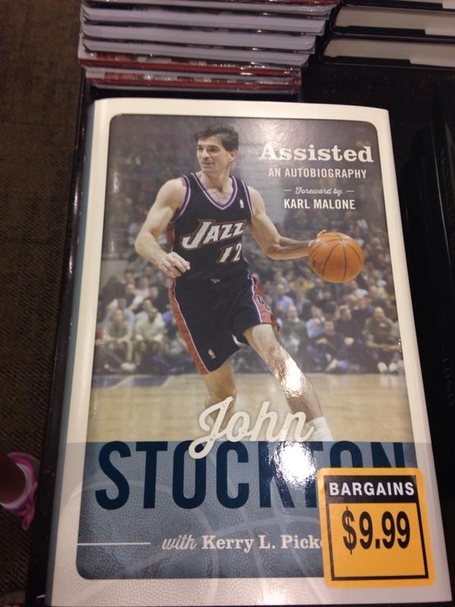 Anyway if you haven't had the opportunity to get Stockton's autograph, today is your lucky day! For the low low price of $2.00 you can get Stockton and Malone's (preprinted) autographs! 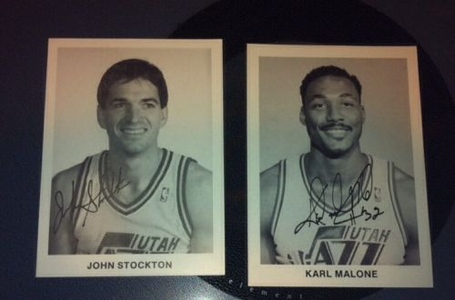 I vividly remember those pics of Stockton and Malone from my childhood!

Speaking of "remember when" Jazz.  The Big Dawg, Antoine Carr is now on Twitter. Make sure to follow him. 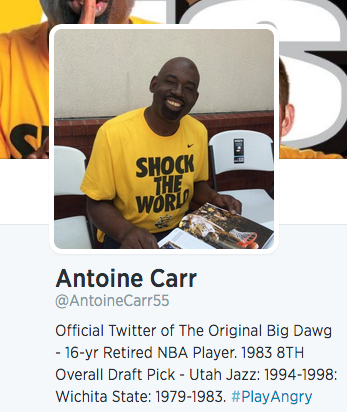 Carr has been super interactive the few days he has been on Twitter. He even replied to one of my tweets!

@dianaallen Diana. Good times. I can't wait to come back and do more things with the Jazz.

I told Moni after he tweeted me that I was as giddy as a schoolgirl.  Anytime those 90's Jazz teams are mentioned or for some reason I have interaction with one of the players from those teams, I just feel so happy and warm and nostalgic. Its a feeling that not even the worst Jazz years (the last four years)  can ever take away.

When I think of Antoine Carr I not only think of his play on the court but his KSL videos!

ICYMI Moni posted an awesome video on her blog.

I LOVED Mike Brown. Brown was the first Jazz player I ever met.  I was with my mom and sister at the Cottonwood Mall, we were eating lunch in the food court.  I turned and I saw Mike Brown. I got so excited I squealed. Brown was ordering food at Orange Julius.  I worked up the nerve to go talk to him to ask him for his autograph. I was a bundle of nerves but Mike Brown was so very nice. He signed my little napkin and spoke to me for a few minutes. I asked him some questions like how he liked the Jazz, playing with Stockton and Malone etc. I can't remember his answers but he was super friendly. Brown told me he was impressed that a young girl  recognized him, knew what position he played and knew so much about the Jazz!

Do you know who scored the first basket in the NBA? I had no idea until reading the most fascinating article. The article is by Charlie Rosen on ESPN Page 2.  (H/T Moni) We don't' know how old the article is.

George Nostrand of the New York Knicks scored the first basket on a two-handed underhand layup. The game was on November 1, 1946.  The Knicks beat the Toronto Huskies 68-66.

In the article Nostrand describes the differences between the game then and the game now. It is absolutely fascinating. There were quite a few differences such as the ball. The ball was a much harder leather with a bladder inside, (they pumped up at gas stations) tied together with tight leather laces. It was easy to lose control and have the ball go in a different direction because of the laces.

Nostrand talks about his childhood on the upper east side of New York. My grandfather grew up on the upper east side of New York so I loved reading about it. They could not afford balls and there were no real hoops except in the tendaments.. They would tape together rags together for a ball (they couldn't afford a real one) and without a hoop they would use anything from a laundry basket on the bottom of a fire escape to a wire hanger on a lampost.

Nostrand mentions Stockton has a player that he loves to watch. He talks about the team game compared to one-on-one.

I loved reading about how the game was different.. For example did you know that dunks used to be considered basket interference. There were other differences so check it out.